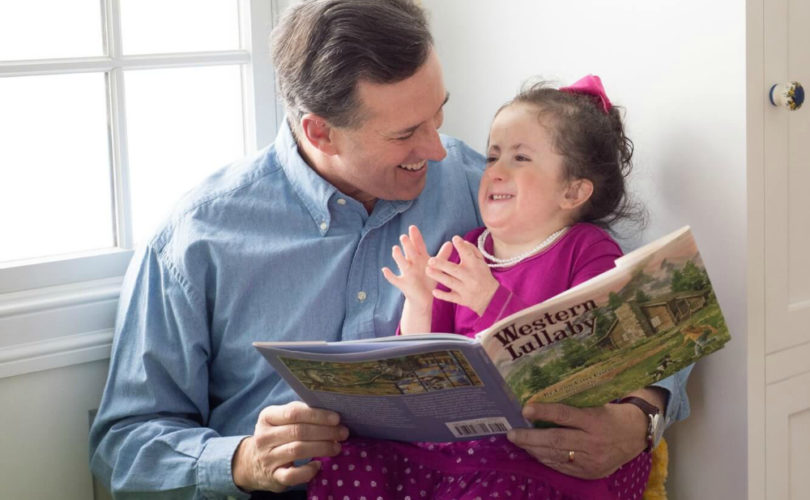 WASHINGTON, D.C., June 5, 2015 (LifeSiteNews) – Sen. Rick Santorum announced he is running for president last Wednesday – but in many ways, the real star of the show was his daughter, Bella.

Her presence at Santorum's 2016 presidential announcement last Wednesday seemed miraculous in itself. Born with a rare condition known as Trisomy 18, in which her cells have three copies of the 18th chromosome instead of two, most children who suffer from it die in the womb before the third trimester.

“Ninety percent die in the first year,” Robert Marion, chief of the genetics and developmental medicine departments at Children’s Hospital at Montefiore Medical Center in the Bronx, told The Washington Post. “And the 10 percent who survive have severe developmental problems.”

Santorum said he discovered he was initially afraid to get close to Bella, fearing that her imminent death would only lead to heartbreak. But now he and wife Karen describe the child as “the center of our universe.”

In an exclusive interview with LifeSiteNews this week, the presidential hopeful had good news about his daughter – and a plea for LifeSiteNews readers.

“She has six-month appointments with all of her doctors, and we got the great news that all of her doctors said, 'We'll see you in a year,'” he said. “That's the first time we've ever had the doctors say that she's on a normal kid calendar of annual check-ups.”

“We had a lot to celebrate on her birthday last month,” he said.

He credits this change to the power of prayer – and asks readers not to stop now.

“Please pass on to your readers how appreciative Karen and I – and the whole family – are for the prayers for Bella,” Santorum told LifeSiteNews. “We know that they have been incredibly powerful and effective in helping her, and I just encourage you to keep her on your list. Don't forget about her. She's doing great, but I know in part she's doing great because so many people are fighting for her and sending all that great intercessory prayer to help her.”

You can read more of Rick Santorum's exclusive interview with LifeSiteNews here.

LSN EXCLUSIVE: Mother “Pressured” to Terminate Pregnancy of Trisomy 18 Child at Catholic Hospital
My Trisomy 18 son is not alive because of a miracle. He is alive because we chose life for him.
They refused to abort their baby boy with trisomy 18. Now he’s their ‘precious bundle of joy’
Trisomy Angel: The boy with a ‘divine purpose’ who taught his family the meaning of love