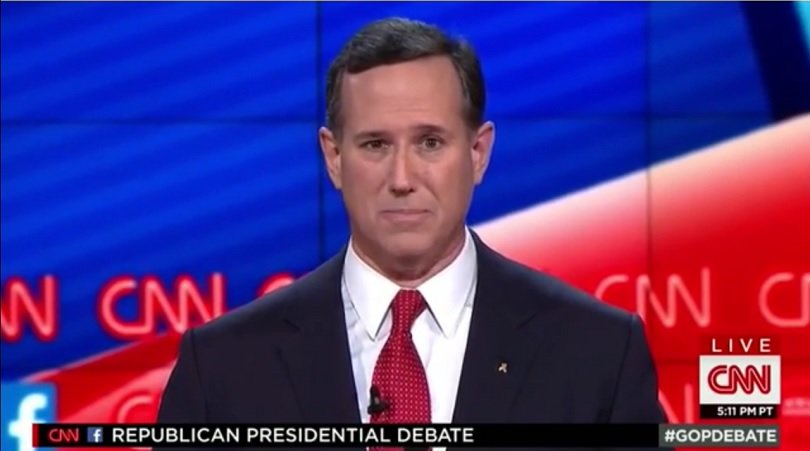 LAS VEGAS, December 16, 2015 (LifeSiteNews) – In a debate focused on foreign policy and the threat of domestic terrorism, a few candidates found the issue hit close to home.

Sen. Marco Rubio placed religious liberty and same-sex “marriage” on par with the night's theme of homeland security in his opening statement.

“Today you have millions of Americans that feel left out and out of place in their own country, struggling to live paycheck to paycheck, called bigots because they hold on to traditional values,” Sen. Rubio said. “And around the world, America's influence has declined while this president has destroyed our military, our allies no longer trust us, and our adversaries no longer respect us. And that is why this election is so important.”

In the first of two debates broadcast live on CNN from Las Vegas last night, former Senator Rick Santorum felt the issue in an even more personal way.

“This week ISIS put out a fatwa on disabled children and killed dozens of them because of their disability,” Santorum said, as he concluded his closing statement.

“Now, I am the father of a disabled child,” he continued, with evident emotion. “I know and have known the face of evil. And I, if you give me the opportunity, will defeat it.”

Santorum's daughter, Bella, was born with Trisomy-18, a rare condition in which children are born with three copies of the 18th chromosome. Although approximately 90 percent of children with the condition die within the first year, Santorum told LifeSiteNews in June that Bella is doing “exceptionally well” at age seven.

The Mosul Eye reported that an ISIS Shari'a judge, Abu Said Aljazrawi, issued the fatwa to “kill newborn babies with Down's syndrome and congenital disorders and disabled children.” The blog claimed to have confirmed 38 such murders by lethal injection or asphyxiation. There is no additional confirmation of the killings at this time, in a region known for churning out inaccurate accounts of atrocities.

If true, his daughter – who was blessed by Pope Francis this fall – would find her life in danger.

Another presidential hopeful, Ohio Gov. John Kasich, has vowed to sign a bill banning abortions performed on babies with Down syndrome.

The bill is supported by another popular figure who was in the debate audience, Sarah Palin, whose son Trig has Down syndrome.

An estimated 90 percent of all children with Down syndrome are aborted, and pro-choice activists strongly oppose the proposed ban.

Aside from those brief interludes, the rest of the debate hewed to the themes of national security and protecting American citizens from the threat of terrorist attack, a topic that took on renewed importance following the recent San Bernardino shootings.

As expected, Rubio clashed with Sen. Ted Cruz, who is emerging as his leading rival in the crowded presidential field. Rubio attacked Cruz for voting to end the NSA's practice of collecting phone call metadata and favoring budget cuts to the military. Cruz responded that Rubio's support for regime change had empowered Islamic fundamentalists in the Middle East and criticized Rubio for his role in the Gang of Eight bill to grant amnesty to illegal immigrants.

In the most contentious primary season in memory, even the debates' venue caused controversy. The Venetian Las Vegas is owned by Republican megadonor Sheldon Adelson, a self-described “social liberal” who strongly supports abortion-on-demand. Although he has not publicly endorsed anyone, Adelson – who spent $100 million in the 2012 elections – is said to support Rubio, and other campaigns privately suggested that Adelson might stack the audience with Rubio supporters.

The debate was also noteworthy for the fact that front runner Donald Trump vowed categorically that he would not run for president as an independent, a promise he repeated in a CNN interview immediately following the program.

“My initial reaction to last night’s debate is that [Dr. Ben] Carson fell flat and is fading fast,” said Richard Viguerie, the chairman of Conservative HQ. “It now looks like a three-person race between Donald Trump, Marco Rubio and Ted Cruz.”

Viguerie is one of several conservative and evangelical leaders who endorsed Cruz this month.

ISIS accused of exterminating children with Down syndrome