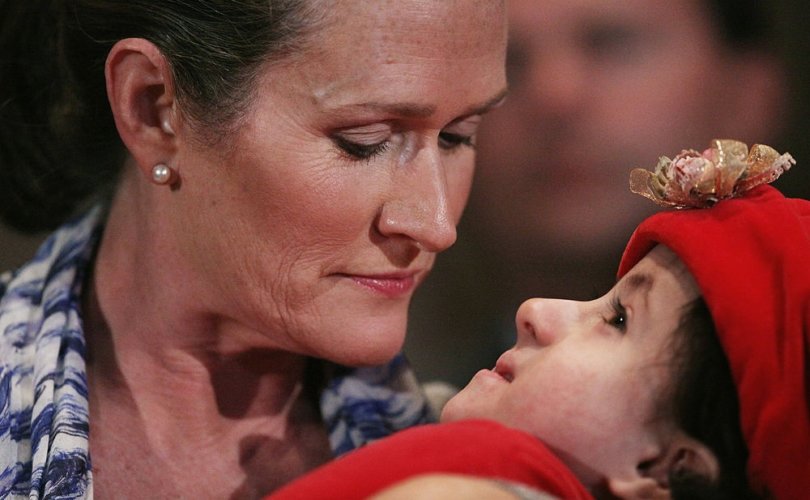 (LifeSiteNews) — After Fox News published a pro-abortion op-ed promoting the killing of an unborn baby thought to have a disability, former Republican presidential candidate Rick Santorum’s wife Karen penned a stirring pro-life rebuttal highlighting the “awe-inspiring life” of the family’s own child, now a teenager, who suffers from the same disability.

Pro-life Catholic Rick Santorum, a former Pennsylvania Republican senator who ran for the U.S. Presidency in 2012 and 2016, posted a link to his wife’s pro-life defense in a Monday tweet thanking up-and-coming conservative outlet Newsmax for publishing the piece.

Fox News and Rick Santorum’s team disagree about why Fox did not run the op-ed.

In his tweet, the former senator had said the article was given to Newsmax after Fox News refused to run it.

On Saturday Matt Beynon, Senior Communications Specialist for Rick Santorum, told LifeSite that he had sent three emails to two different members of Fox News Digital’s team, but “All three emails went unresponded to and I never received an out of office message from either of them.”

⁦@FoxNews⁩ published an op ed from a woman celebrating her abortion of a child w the same condition as our daughter Bella. Karen submitted this to Fox to respond to this call to kill the disabled in utero, but Fox refused to publish. Thanks @Newsmax https://t.co/VnTJayLUHN

Karen Santorum’s article, entitled: “Give Kids With Trisomy 18 a Chance So They May Live,” came in response to a July 7 Fox News op-ed by Georgia Democratic State Rep. Shea Roberts, who Rick Santorum argued was “celebrating her abortion of a child [with] the same condition as our daughter Bella.”

In the pro-abortion Fox News op-ed, the Democratic congresswoman said she killed her unborn child after her doctor said the baby’s blood test indicated the infant had the same disorder, which he said was “incompatible with life.”

“Essentially, my pregnancy would end with the death of our child, either a stillbirth or my baby living a very painful short life of only minutes outside my womb before dying,” Roberts wrote, adding there is “absolutely no doubt in my mind that it was the right decision for me and my family, including my unborn child,” to get an abortion.

RELATED: Prenatal tests which often lead to abortion found to be up to 85% inaccurate: New York Times report

According to Roberts, pro-life laws which forbid all abortions, including in cases of alleged genetic abnormalities or to protect the life of the mother, “will kill people just like me.”

However Karen Santorum, a mother of eight children (seven surviving following the death of their infant son Gabriel), hit back at Roberts in the heart-felt rebuttal published by Newsmax on Monday.

In the article, Santorum said “[t]he unanimous response from my family” after reading Roberts’ article “was tears followed by justifiable anger.”

Explaining that her daughter Bella “is now 14 years old and lives an extremely fulfilling, beautiful, and joyful life”, the Catholic mom said that while her “heart aches for Shea and her family,” she feels anger because “Shea’s family was lied to — by their physicians, and by a society that devalues the dignity of every human life.”

The wife of the former Republican presidential candidate pointed out that “some children don’t have the dismal outcomes [from Trisomy 18] that the so-called experts claim,” and that “[e]very Trisomy 18 child is unique and may or may not share the same medical challenges.”

She also argued that while “old outdated medical books and inept physicians like to claim there are no survivors with this condition,” families “have proved them wrong.”

The Catholic mother went on to quote a doctor at the Children’s Hospital of Philadelphia, who said of Bella when she was only a few months old: “Just give her a chance. How will we know what these kids [are] capable of if we don’t give them a chance? Bella will write her own book, and I hope it’s a good one.”

“Fourteen years later, Bella smiles with delight as we take her to the pool and for bike rides around our neighborhood,” the pro-life mom said, adding “Bella has even written her own book, and it’s a good one.”

RELATED: My unborn son may not live long, but he still deserves protection from those looking to end his life

According to Santorum, the recently-overturned abortion precedent of Roe v. Wade had ignored the humanity of people like Bella, and “the fundamental truth that all children are made in God’s image, regardless of the circumstances of conception or condition upon birth.”

Expressing gratitude for Bella’s “awe-inspiring life” and the “gold standard physicians who have taken exceptional care of her through the years,” Santorum extended her sympathies again to Roberts for feeling pressured to kill her own child.

“I’m so sorry, Shea, for your loss and the loss to your entire family,” she wrote. “I truly am.”

Though Fox News has stated it did not reject Karen’s piece, the network has faced criticism from conservatives in recent months for apparently going soft on key conservative cultural values.

In March, the ostensibly right-wing network on-boarded former Olympic athlete Bruce Jenner, who now calls himself “Caitlyn” and pretends to be a woman, as a contributor.

In June, Fox drew backlash from conservatives for running a “Pride month” special celebrating a family who decided to “transition” their daughter to live as a boy.

This article has been updated for clarity and to include statements from Fox News Digital and Rick Santorum’s press team.