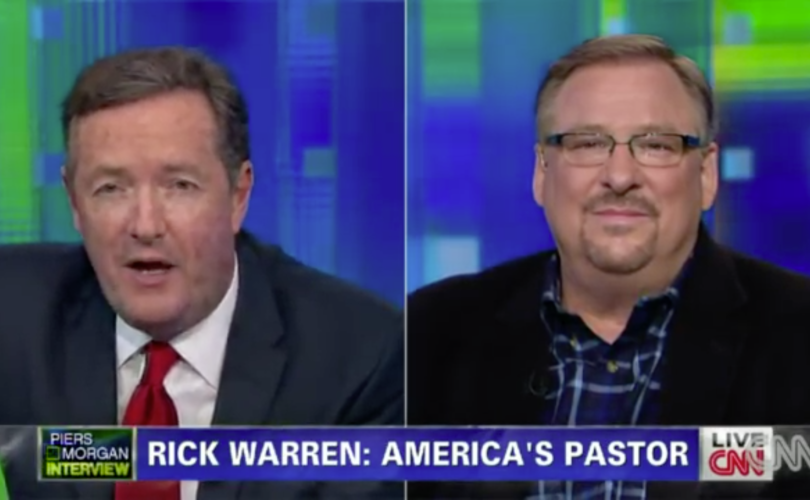 WASHINGTON, D.C., November 28, 2012, (LifeSiteNews.com) – Those who say intolerance is a major problem in the debate over homosexuality and same-sex “marriage” have a valid point, but not in the way they think, according to one of the nation’s most popular pastors.

In a whirlwind media tour to promote the tenth anniversary edition of his bestseller, The Purpose Driven Life – What on Earth Am I Here For?, Rick Warren said the belief people can differ without rancor has disappeared, replaced by an insistence on ideological conformity.

“I am in favor of not redefining marriage,” he said on Tuesday’s edition of CBS This Morning “It’s not illegal to have a gay relationship in America. And so, it’s not a big issue to me.”

Co-host Charlie Rose replied, “You have to be tolerant of other people’s views,”

“The problem is that ‘tolerant’ has changed its meaning,” Warren said. “Tolerant used to mean, I may disagree with you completely, but I’m going to treat you with respect. That’s what tolerant means.”

“Today, to some people, tolerant means you must approve of everything I do,” he continued. “That’s not tolerance. That’s approval.”

Such homosexual lobbyists as Dan Savage have attempted to paint all those who reject homosexual unions as bigots and bullies, a designation both Warren and Rose said does not fit him.

Instead, comity and shared aims should animate people in the public debate, Warren said. While he does not endorse every position taken by the National Organization for Women, he has acted as a “co-belligerent” when that group opposes “pornography, that objectifies a woman’s body.”

During another media appearance Warren told CNN’s Piers Morgan whether people are born with a predisposition toward a certain sexual orientation had no impact on his views of homosexual matrimony. “I have all kinds of natural feelings in my life and it doesn’t necessarily mean that I should act on every feeling,” he said.

The pastor of Saddleback Church also took to Fox to blast Jamie Foxx, who had referred to Barack Obama as “our Lord and Savior.”

His comments came as Bunker Hill Community College in Boston is currently exhibiting a painting of Obama bearing a crown of thorns, with arms outstretched in a cruciform motion.

He added those who trust in Barack Obama “are going to be severely disappointed.”

Warren, who prayed at Barack Obama’s first inauguration, gave a soft but clear defense of traditional Christianity without apology. His performance contrasted sharply with that of fellow megachurch pastor Joel Osteen.

When asked by CNN’s Soledad O’Brien whether homosexuality were a sin, Osteen replied, “When I read the Scripture, that’s what I believe, that the scripture condemns it or says it’s a sin.”  He added, “there are issues that good, Bible-believing people see on both sides of the fence,” and he does not mention the topic in his church.

Osteen’s words inspired Albert Mohler Jr. to reply, “Viewers of CNN saw a display of confusion, evasion, and equivocation coming from one presented as a Christian pastor,” charged Mohler. “What they were really seeing is the total theological bankruptcy of the word of faith movement and the gospel of positive thinking.”

Rick Warren: Well, first, let me ask you. Do you consider yourself to be a tolerant person?

Warren: So, you would – you would be respectful of people who would disagree with you, no matter what?

Warren: Because that’s a very, very personal question, and people want to make an incendiary issue over it. I just – I have biblical views of what I think marriage is about. I am in favor of not redefining marriage – I’m not. It’s not illegal to have a gay relationship in America. And so, it’s not a big issue to me.

O’Donnell: Let me ask you – it’s interesting. There’s a pollster named Bill McInturff – a Republican pollster. He was John McCain’s pollster. He’s head of a big firm. His partner was Mitt Romney’s pollster. And he has talked about there has not been one issue where there’s been so much change so quickly as on the issue of same-sex marriage. Now, we saw about – a majority of Americans support same-sex marriage. How do you – how do you mix those two things – which is, a personal opposition that might be founded in religious faith – based on what is public opinion that is shifting so dramatically on that issue, how do you merge those two things?

Warren: Well, as a pastor, I believe in both the good news – that I believe Jesus is who he said he was – the son of God – but I also believe in the common good. And we’re – we’re in a democracy, where nobody wins all the time – okay? For instance, I happen to believe life begins at conception. But that’s not the law – okay?

Charlie Rose: And for the people that don’t believe that, you’re tolerant of their views – right?

Warren: Well, and – and the point is, nobody’s leaving the country. We have a wide spectrum in America, and we have to work for the common good, and that means, sometimes, what I mean being ‘co-belligerent’. For instance, I don’t agree with everything that the National Organization of Women supports. But when they are opposing abortion – not abortion, but pornography, that objectifies a woman’s body, I’m a co-belligerent with them. So, I don’t happen to agree with everything that my gay friends believe, but when they want to end AIDS, I’m a co-belligerent with them. In fact, Kay and I have given millions of dollars to fight AIDS around the world, and we work with both gays, straights – I can work with an atheist. I can work with a Mormon. I can work with a Muslim. I can work with a Baptist, Buddhist, Jew – and – and that’s one of the issues we have to work on, is the work on what can we-

Rose: But the important thing, I think, is to underline what you said earlier to Norah, in terms of same-sex marriage. You have to be tolerant of other people’s views. And so, if they differ with you with respect to Christianity-

Rose: Or with respect to some of the things you say, you are tolerant and accepting that they came to their beliefs in a-

Rose: In a genuine way, and have to be respected for that.

Warren The problem is that ‘tolerant’ has changed its meaning. Tolerant used to mean, I may disagree with you completely, but I’m going to treat you with respect. That’s what tolerant means. Today, to some people, tolerant means you must approve of everything I do. That’s not tolerance. That’s approval. There’s a difference between acceptance and approval. Jesus accepted everybody no matter who they were. He doesn’t approve of everything I do or you do or anybody else does, either. So, you can be accepting without being approving. That’s an important point.