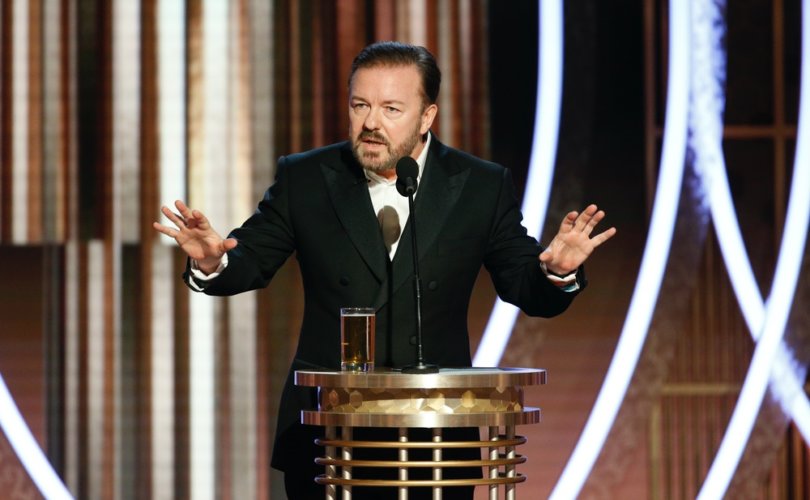 January 8, 2020 (LifeSiteNews) – British comedian Ricky Gervais has hit back at critics of his performance as host of this past weekend’s Golden Globe awards, in which he scathingly called out the hypocrisy of Hollywood’s “woke” elites.

Despite beginning his speech by saying that his comments were “just jokes,” Gervais appeared to be serious when he told the Hollywood celebrities gathered for the awards ceremony on Sunday evening that they were “in no position to lecture the public about anything.”

Some sections of the media have said that Gervais’ speech, which included a number of controversial and extremely vulgar jokes, “cheapened the ceremony” and “overshadowed vital political statements” made during the course of the evening.

Gervais responded to his critics on Twitter by mocking the idea that “teasing huge corporations, and the richest, most privileged people in the world” makes him “right wing.” In a tweet published earlier today, he told “woke” critics that “simply pointing out whether someone is left or right wing isn't winning the argument” and that “just because you're offended, doesn't mean you're right.”

1. Simply pointing out whether someone is left or right wing isn't winning the argument.
2. If a joke is good enough, it can be enjoyed by anyone.
3. It's not all about you.
4. Just because you're offended, doesn't mean you're right.

Gervais also retweeted a post by conservative talk-show host Dana Loesch, who said that the negative reactions to Gervais’ speech “prove his point.”

Loesch tweeted in response to an article in UK newspaper the Indepedent, which argued that “powerful speeches…given by actors including Jennifer Aniston on climate change, Joaquin Phoenix on veganism, Michelle Williams on abortion rights [sic] and Patricia Arquette on the conflict between Iran/US” had been undermined by Gervais. Loesch called the article “garbage” and said “[t]hey can lecture from the stage but he can’t mock their inconsistencies? You prove his point.”

Oh garbage. @rickygervais demonstrated that good comedians go after everyone. No one should be safe, but the prevailing thought these past 10+ years is that one group IS exempt. They can lecture from the stage but he can’t mock their inconsistencies? You prove his point. https://t.co/Dr9PKnbUSg

During his speech at the ceremony, Gervais at one point tore stripes off of Apple for claiming to be “woke” while being a “company who runs sweatshops in China.”

He told the gathered celebrities, “You say you're ‘woke,’ but the companies you work for are unbelievable. Apple, Amazon, Disney – If ISIS started a streaming service you'd call your agent, wouldn't you?”

“So if you do win an award tonight don't use it as a platform to make a political speech. You're in no position to lecture the public about anything.”

At one point in his speech, Gervais referred to the audience generally as “all you perverts.” He joked about the connection of celebrities to convicted sex-offender Jeffrey Epstein, telling the audience, “I know he’s your friend.” At another point in his speech he said that the one thing that all TV and film executives had in common was being “terrified of Ronan Farrow,” the journalist known for helping to uncover sexual abuse allegations against former Hollywood film producer Harvey Weinstein.

It is by no means clear where Gervais stands on a number of the controversial issues touched on in his speech. In one interview prior to the event, he said, “it’s about the gag – whatever it looks like. I think some people think that a comedian’s joke is looking into his real soul. Well it’s not. Sometimes they’re word play, sometimes you say things you don’t mean for comic-effect.”

However, he does appear to be intent on attacking what many consider to be the hypocrisy of celebrities using such award ceremonies to make moral and political speeches. Prior to the event, Gervais told the Spectator magazine of his intention to challenge the celebrity audience, saying “it's a room full of the biggest virtue-signalers and hypocrites in the world, so I've got to go after that.”