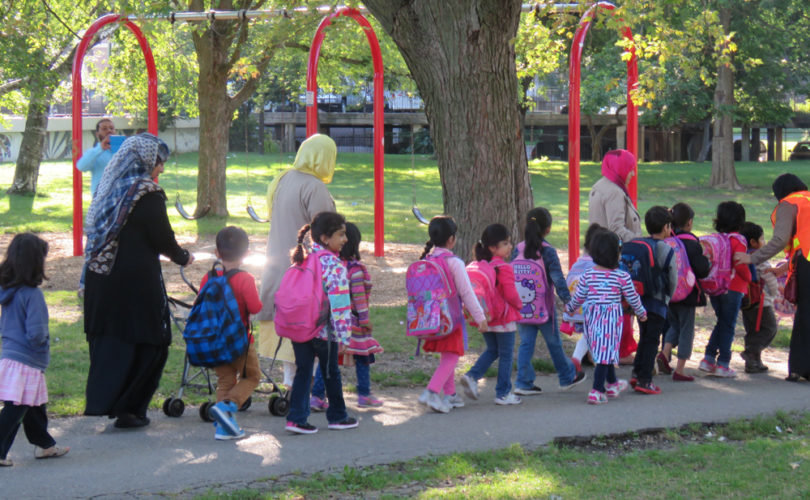 Students take part in a 'school in the garden' as part of a protest in Toronto over the Wynne government's sex ed program.Lianne Laurence / LifeSiteNews

TORONTO, ON, September 16, 2015 (LifeSiteNews) – The Toronto District School Board has confirmed it will not permit students to opt out of any portion of public school curricula that deals with homosexuality or gender identity, stating as its reason that these groups fall under Ontario Human Rights Code protection.

In this, the TDSB follows the lead of the Peel school board, which announced a similar policy concurrent with the Liberal government’s September roll out of its controversial sex-ed curriculum in all Ontario’s publicly funded schools.

Spokesperson Ryan Bird told LifeSiteNews in a telephone interview that while the TDSB has a “board-wide policy” for parents to “request a religious accommodation when it comes to the sex-ed curriculum,” the board “will not be making accommodations for people that are requesting to opt out of portions of the curriculum that have to do with sexual orientation or gender identity.”

“When there’s a request not to learn about an identifiable group…whether it’s sex, gender, race, culture, religion, that’s something we wouldn’t accommodate for,” Bird said, adding the ban on opting out is “about anything that would start to get into the human rights territory.”

But according to constitutional lawyer Albertos Polizogopoulos, this position is “absolutely ridiculous from a legal perspective, at least in my opinion.”

“I think that the Peel school board – and if the Toronto school board is doing this, it as well – are grasping at straws and are making it up as they go,” he told LifeSiteNews in a telephone interview.

Not only is opting out of lessons dealing with homosexuality and gender identity not discrimination, but “if the objection of parents is grounded in religion or moral conscience or belief, the school has a duty to accommodate,” said Polizogopoulos.

“School boards are also bound by Canadian Charter of Rights and Freedoms, which protects freedom of conscience and religion,” noted the Ottawa-based lawyer.

He represents parent Steven Tourloukis, who is currently suing Hamilton-Wentworth District School Board over the right to withdraw his children from classes he finds morally and religiously offensive.

“However, accommodating a parent’s request to pull their kids out of a specific class dealing with, let’s say, alternative families, does not translate into discriminating against individuals who are perhaps of a different sexual orientation,” he said.

“It simply isn’t, because you’re not treating the child from the alternative family any differently,” Polizogopoulos stressed. “You’re accommodating the person whose religious or moral or cultural beliefs would have them not want to sit in that class.”

Campaign Life Coalition spokesman Jack Fonseca agrees, and says the boards’ opt-out bans are “intimidation tactics” based on a “bogus right” and that parents must fight back.

“I think parents should push back very strongly. They should be very blunt and tell these administrators at the school board that there is no bogus right that allows you to eradicate the religious and moral values from the hearts and minds of my children,” he told LifeSiteNews.

“Show me the section of the Human Rights Code that states explicitly that classroom teachers have the right to impose their own values about sex on other people’s children,” Fonseca said. “It’s not there, period. This is an intimidation tactic, and the only way the school board will get away with this is if parents allow them to.”

As did lawyer Polizogopoulos, Fonseca pointed out that “discrimination is telling a student who is same-sex attracted that they won’t be served lunch in the cafeteria.”

But “preventing the school from indoctrinating your own child with beliefs that are counter to your own religious and moral beliefs, that is not discrimination.”

These selective bans on parental opt-out come despite the Liberal government’s promise that parents could withdraw their children from sex-ed classes for religious or moral reasons – a right that is guaranteed in the Education Act, as Liberal Education Minister Liz Sandals assured parents when she released the sex-ed curriculum last February.

Moreover, compounding the difficulty for parents who wish to protect their children from a morally objectionable sexual agenda is that the prohibition against opt-out for lessons on sexual orientation and gender identity holds for all curricula, not just sex education, as TDSB’s Bird confirmed.

The fact that acceptance of homosexuality permeates the curriculum and is pushed by teachers in a variety of subjects was demonstrated earlier this year by two Peel lesbian teachers at a pro-gay Toronto teachers conference, where they explained how to use math lessons and introduce pro-gay books in kindergarten to advance acceptance of the homosexual lifestyle.

But both Fonseca and Polizogopoulos contend that parents can prevail against the Liberal government’s implementation of its sexual agenda in the schools.

“The status of the law in Canada right now is that parents are the final authority on the education and the upbringing of their children,” Polizogopoulos stressed. “When parents send their kids to school they delegate that authority, but they retain it.”

“I would certainly say in my view the law is certainly on the side of the parents,” he told LifeSiteNews. “Parents get to decide what, where, how, and by whom their children are taught.”

Fonseca also emphasized that parents should keep up opposition.

“And know that that threat carries a lot of weight with these school board bureaucrats, because each child who is withdrawn costs them $10,000 per student per year.”

And if enough parents pull out their kids and homeschool them or enroll them in co-op or private schools, the ripple effect will eventually be a noticeable loss of jobs in the public school system, Fonseca predicted.

“And as much as the left-wing teachers’ unions love to promote radical sexual philosophies, they love their teacher jobs more.”