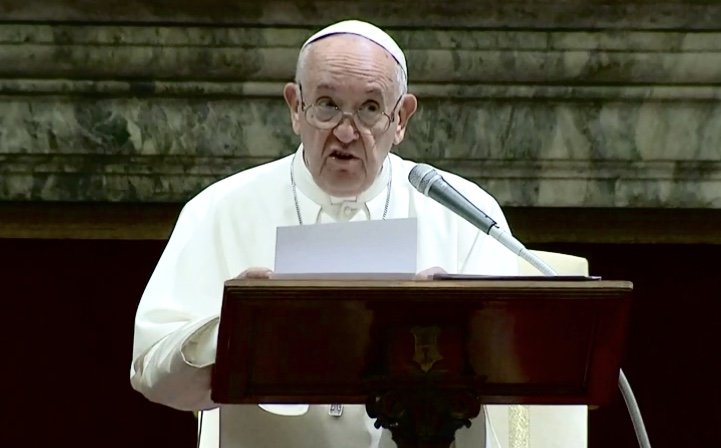 Pope Francis gives his 2019 Christmas address to the Roman Curia at the Vatican.

VATICAN CITY, December 23, 2019 (LifeSiteNews) — In his annual Christmas address, Pope Francis advised the Vatican civil service not to allow “rigidity” to get in the way of “epochal change.”

In his Dec. 21 address to the Curia, the Argentinian pontiff discussed the inevitability and necessity of change in the Church, and warned against “rigidity.”

In the context of “the temptation to fall back on the past,” Pope Francis said:

All of this has particular importance for our time, because what we are experiencing is not simply an epoch of changes, but an epochal change. We find ourselves living at a time when change is no longer linear, but epochal. It entails decisions that rapidly transform our ways of living, of relating to one another, of communicating and thinking, of how different generations relate to one another and how we understand and experience faith and science. Often we approach change as if were a matter of simply putting on new clothes, but remaining exactly as we were before. (…)

Brothers and sisters, Christendom no longer exists! Today we are no longer the only ones who create culture, nor are we in the forefront or those most listened to. We need a change in our pastoral mindset, which does not mean moving towards a relativistic pastoral care. (…)

Here, there is a need to be wary of the temptation to rigidity. A rigidity born of the fear of change, which ends up erecting fences and obstacles on the terrain of the common good, turning it into a minefield of incomprehension and hatred. Let us always remember that behind every form of rigidity lies some kind of imbalance. Rigidity and imbalance feed one another in a vicious circle. And today this temptation to rigidity has become very real.

The pontiff has often preached against “rigidity,” which in his Apostolic Exhortation “Gaudete et exsultate” seems to mean resistance to change. Francis’ critics within the Church fear that this condemnation of rigidity is also reproof of those who adhere too faithfully to certain doctrines of the Church, like the indissolubility of marriage.

A curial employee who spoke to LifeSiteNews under condition of anonymity said the pope seems not to understand that psychological imbalance is not the only reason why people resist specific changes.

“That is, some of his critics might oppose his ideas or plans for religious, academic, or practical reasons,” he said.

“They may be right or wrong, but to suggest that anyone and everyone who resists your plans have mental or emotional problems is unfair and unjust,” he continued.

“Pope Francis has often spoken of the need for dialogue, and he's right to do so. Presuming your interlocutors are psychologically impaired — or worse, in bad faith — makes dialogue all but impossible.”

The Argentinian pontiff offered a quote by the recently canonized St. John Henry Newman to strengthen his argument that the Church must change to meet epochal changes. In his Essay on the Development of Christian Doctrine, the great Cardinal wrote “Here below to live is to change, and to be perfect is to have changed often.”

But Dr. Peter Kwasniewski, the editor of Newman on Worship, Reverence, and Ritual: A Selection of Texts, says Newman was not calling for continual change.

“Ultimately, it means (to them that) we get to think and say things that are contrary to what we used to believe, or act in ways contrary to how we used to act,” he continued.

“But that is not Newman's point at this moment in his Essay on the Development of Doctrine. He is talking about how the ‘idea’ (as he calls it) of Christianity expands, develops, diversifies, and enriches itself as it engages and is engaged with the world around it. It becomes more perfect in its self-understanding and self-expression through this interchange. One need only think about how the challenge of heresies brought forth the great Church Fathers to defend the deposit of faith.”

Kwasniewski added that Newman had made “heavy use” of St. Vincent of Lerins in this work, and that St. Vincent had argued that this development was only a deepening and an articulation of what was already held before but ineptly expressed.

“(St. Vincent) said it was not “mutatio” (substantial change) but “profectus” (growth, as of an acorn into an oak tree),” the author explained.

“For example, a living organism grows more into itself, its own species and individual maturity, by consuming food from the outside world; it does not become something else,” he continued.

“In that sense, Newman is saying that Catholicism becomes more fully itself by engaging the outer world ― not that it evolves from one kind of thing to another.”

Kwaniewski added, “”Whatever inspiration Newman may or may not have contributed to this address, one thing is clear: for Pope Francis, to be perfect is to talk about change often.”

The pontiff mentioned “change” in his address over 30 times.

Francis’ reasons for the need for change in the Vatican’s civil service stemmed from the dramatic demotion of Christianity as a force in Europe and the rest of the world. He noted that the Congregation for the Doctrine of the Faith (founded 1542) and the Congregation for the Evangelization of Peoples (founded 1622) were first established when there was a “Christian world” and “a world yet to be evangelized.”

“Today we are no longer the only ones who create culture, nor are we in the forefront or those most listened to,” he continued.

“ … We are no longer living in a Christian world, because faith – especially in Europe, but also in a large part of the West – is no longer an evident presupposition of social life; indeed, faith is often rejected, derided, marginalized and ridiculed.”

“If we want everything to stay the same, then everything has to change,” Francis said, echoing Lampedusa’s fictional character Tancredi Falconeri.

The pontiff also quoted a “great man” as saying “tradition is the guarantee of the future and not a container of ashes.” The Vatican glossed this in its record of Pope Francis’ speech as “Gustav Mahler, taking up a metaphor used by Jean Jaurès.”

Mahler (1860-1911) was an influential composer of the Romantic era. The sentiment “Tradition is not the worship of ashes, but the preservation of fire” is often attributed to him. Jaurès (1859-1914) was a leader of the French Socialist Party. He said, “To be faithful to tradition is to be faithful to the flame and not to the ash.” (“Être fidèle à la tradition, c'est être fidèle à la flamme et non à la cendre.”)

The pontiff has used this reference before, most notably in an interview in Romania this summer, when he confirmed that Benedict XVI, who is nine years his senior, was like a grandfather to him. Francis said then that “… tradition does not preserve ashes; the nostalgia of fundamentalists (is) to return to the ashes.”

The context of the pontiff’s latest reference to tradition and ashes was the ongoing reforms he wishes to make to the Curia. More conventionally, Pope Francis cited the words of Coptic Orthodox monk Matta El Meskeen, Clement of Alexandria, Benedict XVI, Paul VI, and the late Cardinal Carlo Maria Martini. Francis’ own works are also cited.

Citing Paul VI in the footnotes to his speech, the pontiff wrote, “Saint Paul VI, some 50 years ago, when presenting the new Roman Missal to the faithful, recalled the correspondence between the law of prayer (lex orandi) and the law of faith (lex credendi), and described the Missal as “a demonstration of fidelity and vitality.”

“Analogously, we might also say in this case: not a new Roman Curia, but rather a new age.”

Near the end of his speech, the pontiff quoted Cardinal Martini’s lament, spoken a few days before his death, that the Church is “200 years behind the times.”