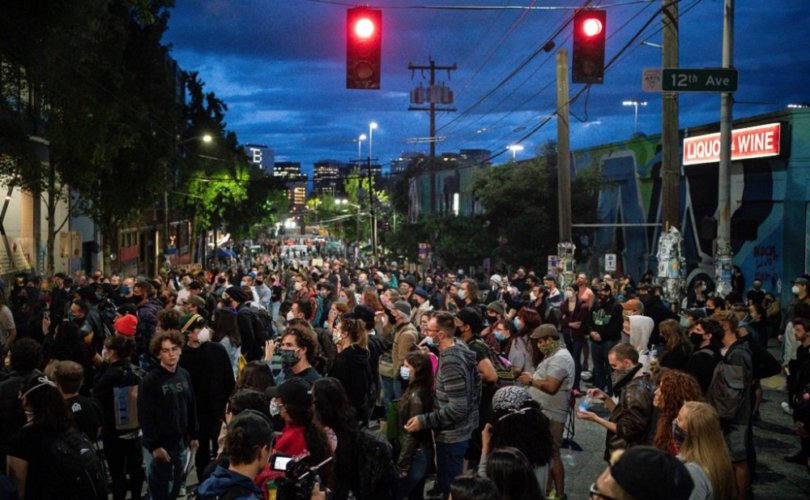 The area, dubbed the Capitol Hill Autonomous Zone or CHAZ by its occupiers, has been under their control since June 8.

The neighborhood centers on the Seattle Police Department East Precinct. Having driven out the police after nine days of sometimes violent protest, the occupiers have draped a banner reading, “This space is now property of the Seattle People” over the abandoned building. The goal of the activists is to live in peace without police, and they hope to make the station both a community center and a “base to build a community movement,” the Seattle Times reported today.

City Journal reported yesterday that Black Lives Matter and Antifa activists fought police and the National Guard soldiers for control of the area for days. The “heaviest part of the conflict” happened at 11th Street and East Pike Street, where law enforcement built a barricade to defend the police station.

“Hoping to break through the barricade, protesters attacked officers with bricks, bottles, rocks, and improvised explosive devices, sending some officers to the hospital,” City Journal reported.

“At the same time, activists circulated videos of the conflict and accused the police of brutality, demanding that the city cease using teargas and other anti-riot techniques.”

Finally, in what Seattle police chief Carmen Best called “an exercise in trust and de-escalation,” the local government decided to abandon the station to the protestors.

“Immediately afterward, Black Lives Matter protesters, Antifa black shirts, and armed members of the hard-Left John Brown Gun Club seized control of the neighborhood, moved the barricades into a defensive position, and declared it the Capitol Hill Autonomous Zone—even putting up a cardboard sign at the barricades declaring ‘you are now leaving the USA,’” City Journal wrote.

Although the CHAZ is technically leaderless, rap artist Raz Simone and former mayoral candidate Nikkita Oliver have both been named as organizers. City Journal alleged that the AK-47-toting Simone shouted, “This is war” when the police station was abandoned and assaulted protesters who didn’t follow his instructions, “sparking fears that he was becoming the de facto warlord of the autonomous zone.” When President Donald Trump tweeted yesterday that “Domestic Terrorists have taken over Seattle,” Simone took it personally and prematurely called for followers to avenge his death.

“The President really put a hit on my head,” he tweeted in response.

“I’m not a Terrorist Warlord. Quit spreading that false narrative. The world has NEVER been ready for a strong black man. We have been peaceful and nothing else. If I die don’t let it be in vain.”

Nikkita Oliver was among the activists who gave speeches after the police left the Capitol Hill area on the evening of June 8.

On June 9, activists identifying themselves as “the Collective Black Voices at Free Capitol Hill” addressed a list of “demands” to the “Government of Seattle, Washington.” They claimed that the demonstrations outside the East Precinct were “peaceful” and that their lengthy document represents “the black voices who spoke in victory at the top of 12th and Pine [streets] after 9 days of peaceful protest while under constant nightly attack from the Seattle Police Department.”

The demands include the abolition of the police department and the court system, the abolition of juvenile detention homes, a federal investigation of all police brutality accusations in the state of Washington, a retrial of all “People of Color” imprisoned for violent crimes, the release of anyone “serving time for marijuana-related offenses,” free college education for all, and the employment of black doctors and nurses “specifically to help care for black patients.”

According to Seattle’s KOMO News, armed civilians are patrolling the streets of CHAZ.

Seattle’s assistant police chief, Deanna Nollette, stated in a briefing that “there is no legal right for those arms to be used to intimidate community members.”