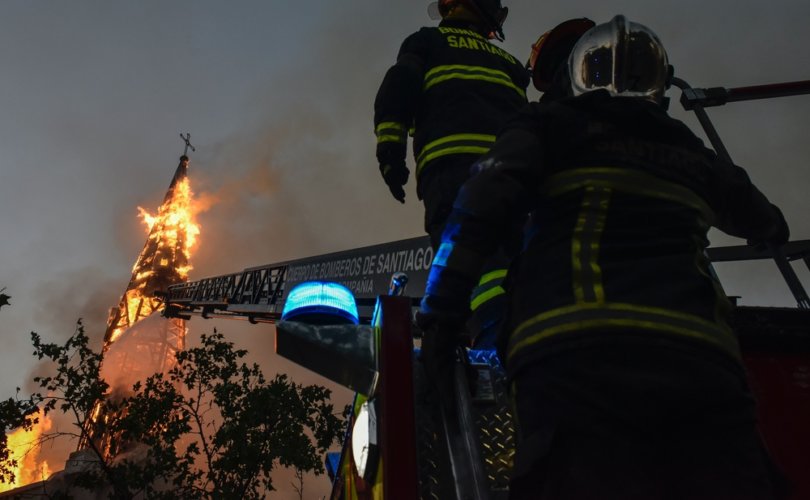 Firemen try to put out a church on fire during a protest on October 18, 2020 in Santiago, Chile. Chile will hold a referendum next Sunday to decide whether or not to modify the Pinochet-era constitution.Claudio Santana / Getty Images

SANTIAGO, Chile, October 20, 2020 (LifeSiteNews) – Two Catholic churches were destroyed in Chile’s capital city Sunday in the wake of riots marking the one-year anniversary of anti-government protests that called for a new constitution.

“Television images from Santiago on Sunday showed masked protesters filming with their smartphones and cheering as the spire of the burning La Asunción church crashed to the ground,” the Wall Street Journal reported. “Demonstrators also set fire to San Francisco Borja church, which dates from the mid-19th century.”

CHILE | Antifa Celebrates the destruction of the church in Santiagopic.twitter.com/okbvkLbDPO

The Church of St. Francis Borgia is regularly used for law enforcement ceremonies. The Church of the Assumption, over a century-and-a-half old, saw its dome collapse into flames to the shouts of, “Let it fall, let it fall.”

The Archbishop of Santiago, Celestino Aos, made a public statement condemning the violence:

A year ago we suffered an outbreak of violence that caused us so much personal pain, and so much material destruction that we thought would have been a bitter and strong lesson. We have had a hard time rebuilding the facilities, and it has demanded constant sacrifices and discomfort from the most impoverished; it made their lives more painful.

According to the Wall Street Journal, the government also condemned the attacks that included businesses as well. “This is an expression of brutality,” said Interior Minister Victor Perez, who added, “Today we must lament the violent acts, but we will confront them.”

Our Catholic faith is under attack worldwide. These attacks are demonic.

This is one of the arsonists celebrating the collapse of the Church of San Francisco de Borja in Santiago, Chile.

“And these will go away into eternal punishment, but the righteous into eternal life.” pic.twitter.com/6SqROjPgxj

This weekend marks the first anniversary of the 2019 revolution in Chile. Let's take a tour of the “commemorations,” shall we?

Here they are vandalizing the church where the police attend Mass, San Francisco de Borja— pic.twitter.com/oOKGC7Y81B

After you have signed the petition, please take a few minutes to politely call the USCCB's Respect Life Office and ask the bishops to issue a united statement in defense of Amy Coney Barrett's Catholic faith and her pro-life beliefs. Their phone number is: 202-541-3070. Or, write them an email at: [email protected]rg

When the demoniacs attacked the church in Santiago de Chile

They wrote on the wall of the burnt out church

'Muerte al Nazareno…Death to the Nazarene'

The devil was always stupid

Sunday’s protests began relatively peacefully in which “about 25,000 people, some holding large banners calling for a new constitution, congregated Sunday in Plaza Italia.” The square is where last year’s protests took place, and “threw one of Latin America’s most stable and prosperous nations into disarray, leading to more than 30 deaths and billions of dollars in damage as hotels and supermarkets were trashed nationwide.”

Civil unrest began to increase “when high-school students upset over a small subway-fare increase rushed subway stations and took to the streets. That quickly morphed into far larger protests in which hundreds of thousands of Chileans conveyed their discontent over poor health care, small pensions and economic inequality despite years of robust growth and declines poverty.”

At stake is a referendum to replace the country’s constitution that was written in 1980 during the presidency of military dictator General Augusto Pinochet, who was condemned for human rights abuses.

“These rioters are the same rioters that flood the streets demanding abortion because abortion is a sacrifice to Satan himself. We must pray, we must offer sacrifices in reparation and we must fast,” she continued. “The spiritual battle has reached a fever pitch here in the U.S. and in so many other countries even traditionally Catholic ones, but remember that God is sovereign.”

2020 has seen a massive uptick in vandalism of Catholic churches and statues, particularly in the U.S.