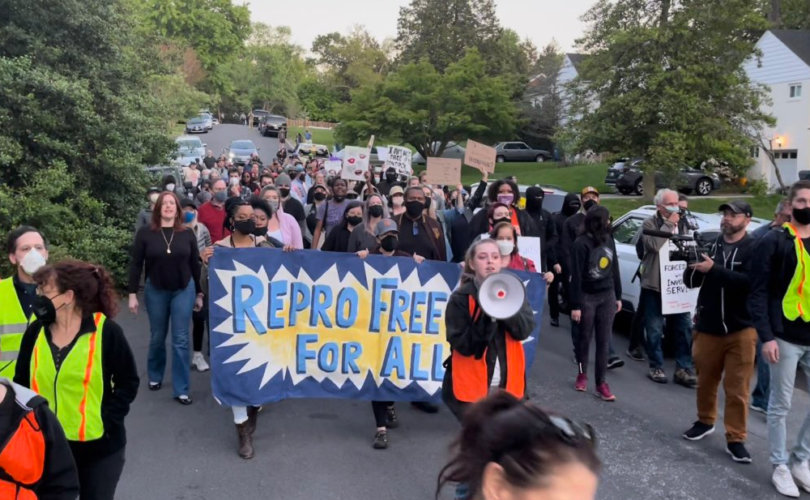 Early Monday evening, a large crowd of about 200 people marched down the street towards the house of Supreme Court Justice Samuel Alito. Some used megaphones to lead the crowd in chants of “You don’t care if people die,” and “My body, my choice.” This was part of a wave of public protests against a possible overturning of Roe v. Wade, an event suggested by a leaked draft majority opinion of  the Supreme Court.

Shouting out for “justice,” the crowd threatened, “If we don’t get it, burn it down.” The pro-abortion protesters gathered in response to a leaked draft opinion from Justice Alito, which indicated a court majority could be poised to overturn Roe v. Wade, the nearly 50-year-old ruling that imposed abortion on demand on all 50 states.

After having demanded that Alito “keep abortion safe and legal,” the crowd assembled in front of his house to deliver prepared speeches. One speaker claimed that “forcing people to carry unwanted pregnancies will cause unnecessary death and lifelong injury, both physical and mental.”

Protestors give prepared speeches in front of the Supreme Court justices home. Doesn’t seem like the Alito family is here pic.twitter.com/hTIITu0aRh

“Fuck Alito, abort the court! Fuck these fascists!” are some chants from the crowd pic.twitter.com/Qq5ksNDhnP

The Daily Wire’s Margaret Mary Olahan recorded brief footage of some protestors clad completely in black, wearing balaclavas and baseball caps, who decried what they described as “torture” provided by pro-life pregnancy centers.

A relatively light police presence was visible, as officers positioned themselves on the outskirts of the protest, between the crowd and Alito’s house.

After repeating cries of “F**k you Alito,” and “Abort the court,” the crowd departed from the street, leaving candles burning in the road.

ShutDownDC also wrote on Twitter that a “Democratic Party affiliated super pac will give us $1,500 to facilitate an abortion for someone at risk for every comment or email we receive from an angry forced birther. PLEASE keep the comments coming.”

Update: A Democratic Party affiliated super pac will give us $1,500 to facilitate an abortion for someone at risk for every comment or email we receive from an angry forced birther. PLEASE keep the comments coming.

The radical pro-abortion group “Ruth Sent Us” recently published the locations of six pro-life Supreme Court justices’ home addresses on their  website. Following this, pro-abortion protestors also assembled outside the houses of Chief Justice John Roberts and Justice Brett Kavanaugh on May 9.

According to Breitbart, following the online publishing of the home addresses of the conservative justices, Alito and his family were “moved to an undisclosed location for safety.”

A wave of violence and vandalism has swept through the country since the Supreme Court leak, as pro-abortionists invaded Sunday Mass in Los Angeles, sprayed anti-life graffiti onto a Texas pro-life pregnancy center, and even issued calls for killing the Supreme Court Justices.

However, as LifeSiteNews has noted, such protests outside the Justices’ houses violate federal law. 18 U.S. Code § 1507 on “picketing or parading” states that anyone with the “intent of influencing any judge … in the discharge of his duty, pickets or parades in or near … a building or residence occupied or used by such judge” shall be fined or imprisoned up to a year.