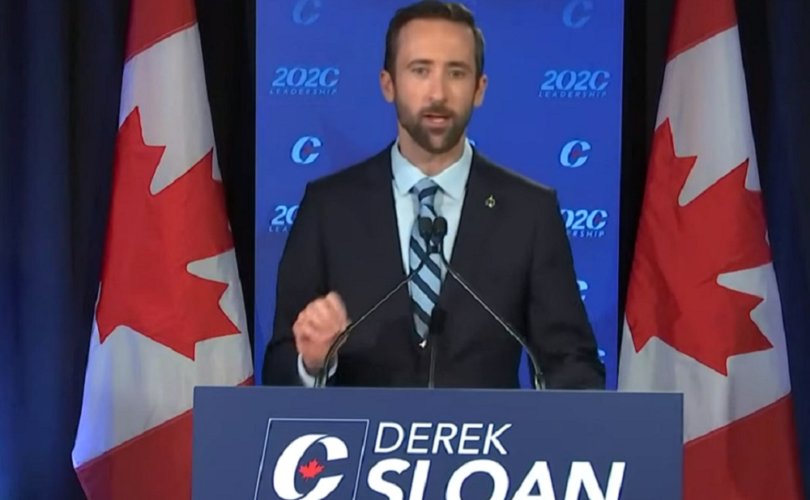 The United Nations Office at Geneva (UNOG) voiced support for Antifa in a June 19 Twitter post, by “expressing profound concern” over the fact the United States government is looking at labeling them a terrorist organization.

In a June 23 email to his followers, Sloan blasted the UN, saying it was “shockingly inappropriate” for them to show support for Antifa.

“Incredible but true! The United Nations actually voiced their support for an anti-government, radical leftist organization that has incited violence and rioting in cities across the U.S. during the past three weeks!” said Sloan.

“Besides being shockingly inappropriate, this is also a profoundly politically ignorant statement….the rights to free expression and peaceful assembly are foundational, but they don’t include burglary, arson, vandalism, and assault.”

Sloan, who identifies as pro-life and pro-family, also said in his email that if elected Prime Minister, he will “designate ANTIFA as a terrorist group.”

“ANTIFA’s aim is nothing less than the destruction of western democracy…Conservatives, in particular, have to be concerned about this, because ANTIFA is well known for singling out conservatives for vicious attacks,” said Sloan in his email.

“It’s clear that the UN is becoming either hopelessly out of touch, or irredeemably radically leftist in its beliefs and policies. Or perhaps both,” added Sloan in his email. He also said the same thing on Twitter this week.

The UN social media post showing support for Antifa caused an uproar from many, which prompted the UNOG to delete the post a few days ago. The deleted post can still be seen on an archive site.

The now-deleted UN Twitter post showed a photo of the Antifa flag with the following text: “UN Human Rights experts express profound concern over a recent statement by the US Attorney-General describing Antifa and other anti-fascist activists as domestic terrorists, saying it undermines the rights to freedom of expression and of peaceful assembly in the country.”

In an announcement last month, U.S. President Donald Trump said he will declare Antifa a terrorist organization, as the group is suspected to have played a key role in the rioting that followed the death of George Floyd.

Antifa, which is short for “anti-fascist,” is a political movement that promotes leftist extremism that in recent years has gained strong traction in the U.S.

The leftist group has no official leader but in recent months, people claiming to be members of it have been active participants in the violent and destructive rioting taking place in the U.S., which were sparked by Floyd’s death.

Sloan also said in his email that the UN is “anything but the impartial, multi-national body they were intended to be,” and that they have “proven” to be “increasingly influenced by, and to be exporters of, political and social radical leftism.”

Sloan then said that if elected Prime Minister, he will “stop the practice of signing UN treaties that undermine Canadian sovereignty.”

“Why is the UN trying to normalize the actions of ANTIFA under the false umbrella of ‘peaceful assembly’, when their assembly invariably involves pre-meditated and extreme violence, rioting, and harassment?” said Sloan.

In his email, Sloan again promised to defund the World Health Organization (WHO) should he be elected prime minister, and added that he is the “only candidate willing to take us out of the UN Paris Agreement.”

Last week, Sloan said that should he become prime minister, he would defund foreign abortions, Planned Parenthood, and “Pride” parades as well as the WHO.

In last week’s CPC English leaders debate, he said his fellow candidates would “agree with him” that “it’s not right” that Canada has no laws protecting babies from abortion.