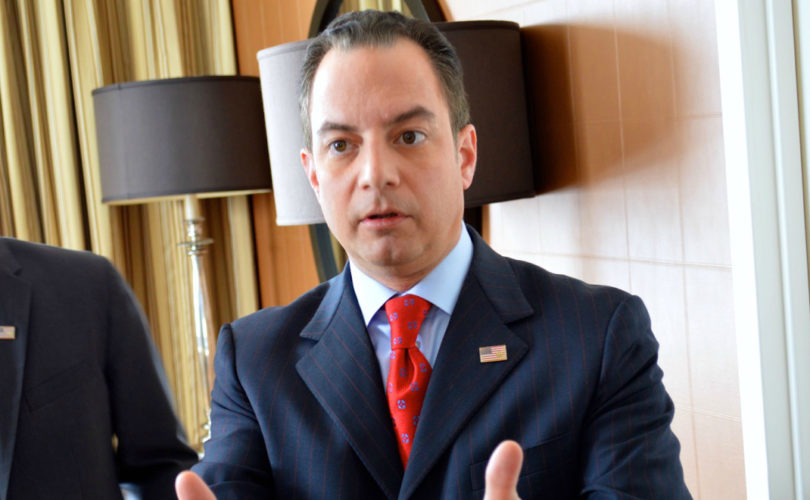 CLEVELAND, Ohio, July 22, 2016 (LifeSiteNews) – Republican National Committee Chairman Reince Priebus caused a stir before the start of this week’s GOP convention in Cleveland by saying the Republican Party supported the idea that children fare better with a mother and a father.

NBC’s Chuck Todd questioned Priebus Sunday on Meet the Press about the part of the GOP platform affirming the idea that every child deserves a married mom and dad.

The plank draft held that children in traditional two-parent homes are generally physically and emotionally healthier, with less chance of drug and alcohol use, participation in crime and out of wedlock pregnancy, concluding with, “The data and the facts lead to an inescapable conclusion that every child deserves a married mom and dad.”

“It's implying that somehow children of same-sex couples are more likely to be addicts, to engage in crime? Do you mean to have it imply that?” Todd asked.

“No,” Priebus told Todd, “what we mean is that the best scenario for kids is a loving mom and dad.”

The RNC chairman went on to qualify the GOP platform was not suggesting that parents in other scenarios weren’t capable of raising or loving a child, including same-sex parents, before circling back to the GOP position that children are better off with a mother and father.

“However, it doesn't mean at all that single parents, that same-sex parents, that any parent in America can't love a child and can't raise a child, and that child can't be successful and loved,” Priebus said. “So it doesn't mean that. It just means what the facts say. Look, like I said before, love, respect, dignity. But traditional values. And that's what our party is about.”

Reaction in the press was critical of Priebus.

Politifact responded with the headline, “GOP chair wrongly claims 'facts' show children do better with straight parents,” and saying a majority of research indicates children of same-sex parents are no worse off.

Ample research has indicated that children do thrive best with a mother and a father, and grown children of same-sex households have begun to speak about negative experiences and also in opposition to same-sex marriage.

A study released earlier this month in the journal Depression Research and Treatment added to rising evidence against the idea there are “no differences” for children of same-sex households, a few months after media reports prematurely and incorrectly announced the science was settled.

Dr. Jennifer Roback Morse, president and founder of the Ruth Institute, an organization that promotes marriage, family and the rights of children, stated in the wake of last year’s U.S. Supreme Court Obergefell decision redefining marriage that the concept of married gay parents is a societal experiment and further that it was wrong to experiment on children. She also said it was wrong to think that it is acceptable to deny children the right to their biological parents.

“What I see happening rhetorically, and probably even legally, is people saying that biology isn’t all that important, that we need to break our social belief in bio-genetic parenting as the norm,” she said. “I think this is a very dangerous place to go. I think it’s just wrong for adults to say children have no right to their natural parents.”

Morse said later last fall in a conference in Rome on the Catholic Church ministering to those with same-sex attraction that intentionally separating children from their biological parents is harmful to them.

“Deliberately depriving children of a relationship with one of their parents is an injustice to the children,” she stated in a report from the National Catholic Register. “The fact that we have been doing so for the past 40 years through divorce is no excuse to create another whole class of injustices to children.”