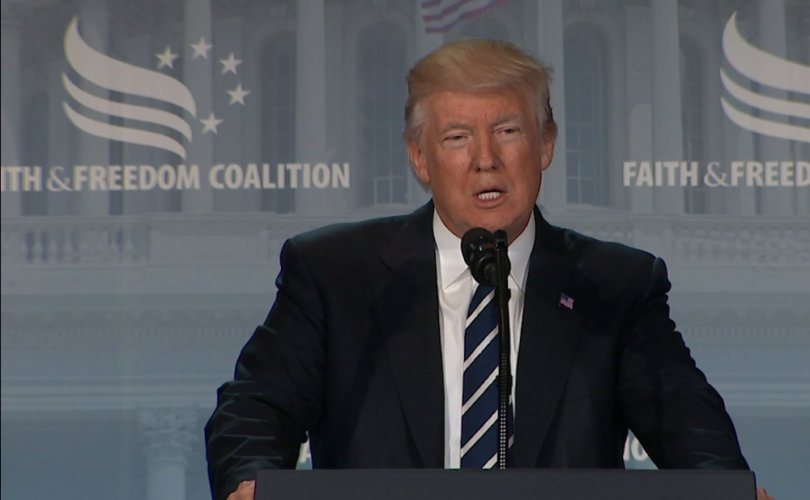 President Trump speaks at the Faith and Freedom Coalition’s Road to Majority Conference.

WASHINGTON, D.C., June 9, 2017 (LifeSiteNews) – Our rights come from God, President Trump told an evangelical conservative crowd this week, and no one on Earth can take them away.

Trump also stated it is God whom Americans worship — not government.

Family is the foundation of American life, he said as well, and families and churches — not government officials — know best how to create a strong and loving community.

“We know that parents, not bureaucrats, know best how to raise children and create a thriving society,” Trump stated. “And above all else, we know this: In America, we don’t worship government. We worship God.”

Trump addressed the opening day of the Faith and Freedom Coalition’s Road to Majority Conference on Thursday in Washington, D.C.

His remarks drew applause at the gathering as he mentioned God and faith numerous times, and also focused heavily on religious liberty.

Faith and freedom are linked because “liberty comes from our Creator,” the president said, “Our rights are given to us by a divine authority, and no earthly force can ever take those rights away.”

As the media fixated on former FBI Director James Comey’s Senate Intelligence Committee testimony across town, Trump thanked the evangelical audience gathered at the Omni Shoreham Hotel for its support.

Speaking against centralized Washington bureaucracy and government overreach, Trump’s closest reference to the contested issue of Russian election interference behind Comey’s Capitol Hill appearance Thursday was in pointing to obstructionist forces in Washington opposing him and his work on behalf of the American people.

“The entrenched interests and failed, bitter voices in Washington” will do everything in their power, he said, including lying, and spreading hate and prejudice.

“But we will not back down from doing what is right,” stated Trump, going on to say it was because of the Bible that “we know that the truth will prevail.”

Trump promised to defend religious freedom on the campaign trail before his November victory over Hillary Clinton, achieved in part by the Evangelical and Catholic votes.

“And as you know, we’re under siege,” Trump told the conservative Christian crowd Thursday, but we will always “defend your right, and the right of all Americans, to follow and to live by the teachings of their faith.”

Trump also pointed out his follow-through on the promise to withdraw from the Paris Climate Accord to protect jobs, U.S. sovereignty and freedom.

The global climate agreement is controversial, not only for its negative impact on American jobs and embrace so-called climate change, but also its fostering of abortion, contraception and gender politics.

Trump cited his Executive Order Promoting Free Speech and Religious Liberty, signed in May, in emphasizing his support for religious freedom.

The order tells federal agencies to address conscience-based objections through amended regulations in the Obamacare Contraception Mandate. It also gives churches more freedom to speak about political issues and elections, something Trump vowed in particular to do by rescinding the Johnson Amendment so that pastors can preach freely.

“No federal worker should be censoring sermons or targeting pastors, Trump said. “These are the people we want to hear from.”

“As long as I'm President, no one is going to stop you from practicing your faith or from preaching what is in your heart,” he continued. “It is time to put a stop to the attacks on religion.”

“We will end the discrimination against people of faith,” he said. “Our government will once again celebrate and protect religious freedom.”

Continuing to center on faith, Trump wrapped up his remarks by saying America was the sum of its citizens. “And we are all made by the same Almighty God.”

Acknowledging there are many challenges ahead, he said, “As long as we have pride in our beliefs, courage in our convictions, and faith in our God, then we will not fail.”

Trump said as well that as long as the country remains true to its values, loyal to its citizens, and devoted to its Creator, then its best days are yet to come.