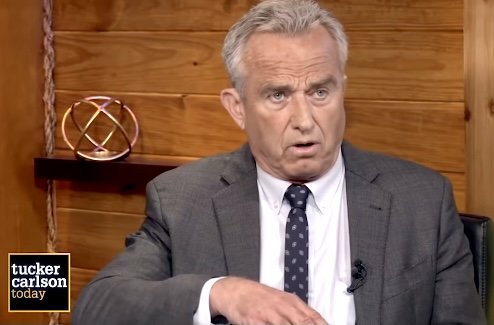 Editor’s Note: We strongly encourage watching the entire video interview to best appreciate the extraordinary importance of Kennedy’s statements and his new book. Kennedy is difficult to understand at the beginning of the video, but this becomes easier as the interview proceeds.

In an interview on November 15 with Fox News host Tucker Carlson, Robert Kennedy Jr., the nephew of late U.S. President John F. Kennedy, detailed the decades-long corruption occurring within the pharmaceutical industry and the federal regulatory agencies. Included is the collusion between Dr. Anthony Fauci, director of the National Institute of Allergy and Infectious Diseases (NIAID), and Gates pursuant to vaccine development, vaccine safety, mass vaccination programs, and legal immunity.

According to Kennedy, it “wasn’t a bunch of hippies” who thought the vaccines were dangerous, but rather it was “insurance companies” who refused to insure vaccine manufacturers because their products were “too dangerous.”

Kennedy explained that when Pfizer, called Wyeth at the time, developed and administered a “diphtheria, tetanus, and pertussis vaccine (DTP)” in the “early ‘80s,” they quickly discovered that there was serious risk of injury. Despite their “internal documents” presuming a “one in 15,000” rate of “permanent brain injury or death,” the Centers for Disease Control and Prevention (CDC) listed the serious injury rate at merely “one in a million.”

Kennedy described that after the mass reports of injury and death, Wyeth (Pfizer) conducted its own study with the National Institute of Health (NIH) and found that the true injury rate was a staggering “one in 300.”

“[After the frightening discovery] they went to the Reagan administration, and to the Democrats in Congress … and they said, ‘if you don’t give us blanket freedom from liability, we are going to stop making vaccines and you will be out of a vaccine supply,’” Kennedy informed Carlson. “So, Congress passed and Reagan signed [the Vaccine Act].”

In the interview, Kennedy told Carlson that “everybody was reluctant” to pass the measure, and Reagan had even asked Wyeth (Pfizer), “why don’t you just make the vaccine safe?” to which the company stated, “Because vaccines are unavoidably unsafe.”

Confirming Kennedy’s assertion, the National Childhood Vaccine Injury Act of 1986 uses the phrase “unavoidable side effects” verbatim when enshrining into law that “no vaccine manufacturer shall be liable in a civil action for damages arising from a vaccine-related injury or death.”

Elaborating on the issue, Kennedy informed Carlson that “vaccines are the only product that never has to be safety-tested,” because the health agencies have close ties with the military, hence the CDC’s use of titles such as “Surgeon General.” So, when these agencies launched “the vaccine program” in America, they did so “as a national security defense,” and labeled the injections as “biologics” instead of “medicines” to avoid “regulatory impediments.”

According to Kennedy, as a result, not one of the 72 doses (administered in a series of 16 shots) of vaccines that are given to children “has ever been safety-tested against a placebo in pre-clinical trials.”

Kennedy told Tucker that this led him to file a lawsuit in 2016 against HHS (Health and Human Services) to obtain proof the safety trials had been done, after Fauci insisted that his claims were false. After a “year of litigation,” Kennedy stated that HHS came back and admitted he was “right” and that no such testing had ever been conducted.

“So, nobody can tell you with a scientific certainty whether any of those products are causing more deaths and injuries than they’re averting,” Kennedy stated. “People say I’m anti-vaccine. I’m not. I’m pro-science, I’m pro-safety testing.”

Tying together Fauci, Gates, and the federal regulatory agencies, Kennedy outlined that in 2000, Fauci flew to Seattle to meet with Gates. During this meeting, they struck a partnership to “vaccinate all of humanity,” eventually calling the program in 2009 “The Decade of Vaccines.” The program was formally adopted by the World Health Organization (WHO) in 2011, with the end date set for 2020.

With Gates using his large wealth to accumulate partial ownership in all major pharmaceutical companies, as well as significant influence over so-called philanthropic organizations and regulatory agencies, Kennedy stated that nothing goes through the WHO without “first being vetted by the Gates Foundation.”

In effect, Kennedy says that Gates uses his foundation’s influence over the WHO to require  countries to use the vaccines he is heavily invested in or they will no longer receive the money from the WHO that they require to operate. This includes pushing the often-lethal DTP vaccine, which is no longer administered in America and Europe due to its catastrophic risk profile, to “161 million African kids … each year.”

Substantiating Kennedy’s statements regarding Gates’ relationship with the Orwellian WHO as its de facto puppet master, both the well-researched 2018 documentary titled “TrustWHO”  and a 2017 report by left-leaning Politico show Gates has enormous and worrisome control over the global organization’s decision-making.

“Some health advocates fear that because the Gates Foundation’s money comes from investments in big business, it could serve as a Trojan horse for corporate interests to undermine WHO’s role in setting standards and shaping health policies,” Politico wrote. Adding that a Geneva-based NGO representative told them, “He is treated liked a head of state, not only at the WHO, but also at the G20.”

This is the second attack that Kennedy has levied publicly regarding the corruption of tech billionaires, governments, and the pharmaceutical industry in recent weeks.

Earlier this month, Kennedy condemned Big Tech for its involvement in censoring the truth about vaccines, saying, “When they use the term ‘vaccine misinformation,’ they are using it as a euphemism for any statement that departs from official government policies and pharmaceutical industry profit-taking.”

“It has nothing to do whether it’s true or false, it only has to do [with] what the political implications are,” Kennedy added. “And who is doing this censorship? It’s government officials in league with Bill Gates, Larry Ellison, Mark Zuckerberg, and Sergey Brinn from Google, and with all of these internet titans.”