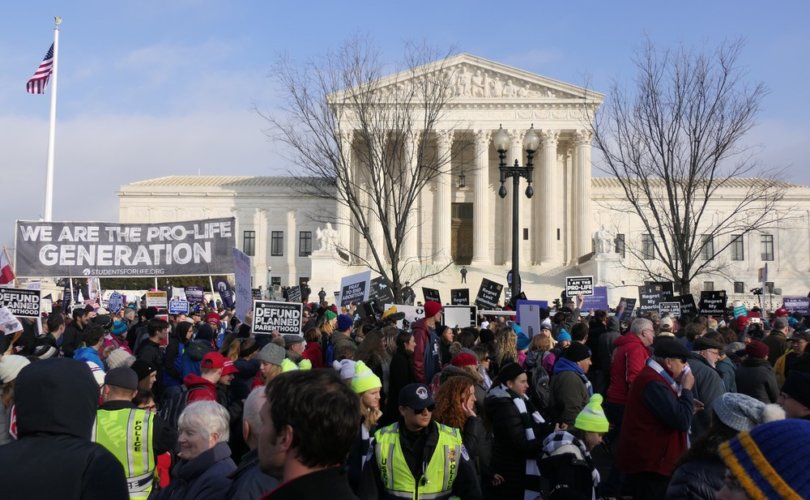 WASHINGTON, D.C., February 7, 2019 (LifeSiteNews) – The U.S. Supreme Court has voted five to four to block the implementation of a Louisiana law requiring basic health and safety standards for abortion facilities, potentially hinting at the justices’ disposition to affirm a key pro-abortion ruling from 2016.

Justices Thomas, Alito, Gorsuch, and Kavanaugh indicated they would have denied the application and therefore allowed the pro-life law to go into effect. The Supreme Court still may take the case, in which case it would be heard sometime after October, but in the meantime, the law mandating abortion facilities uphold basic safety standards remains blocked.

Justice John Roberts, previously thought of as a reliable pro-life justice, joined his liberal colleagues in preventing the law from taking effect pending a ruling on the decision.

Kavanaugh dissented from the grant of application for a stay, focusing largely on technical points.

In September, a panel of the Fifth Circuit Court of Appeals ruled 2-1 in favor of Act 620, the state’s law requiring abortion centers to make arrangements for admitting women to hospitals within 30 miles in cases of life-threatening complications, and ordered a lawsuit against the law dismissed, reversing a previous ruling by a federal judge in Baton Rouge. Earlier in January the full Fifth Circuit rejected an appeal to rehear the case, and attorneys representing abortionists filed a petition with the Supreme Court, SCOTUSblog reports.

They wanted the Court to block enforcement of the law (which was set to take effect February 4) while they prepared a petition for review, arguing the law is no different from the Texas law the Supreme Court struck down in 2016’s Whole Woman’s Health v. Hellerstedt, and that it would reduce Louisiana to one abortionist for the entire state.

However, 5th Circuit Judge Jerry Smith noted in September that while the laws may be similar, its impact would be different as most Louisiana hospitals didn’t have the Texas requirement that doctors must see a minimum number of patients per year to qualify for admitting privileges. He also concluded there was no evidence that any abortion centers would be forced to close as a result of the law, and that there was only one abortionist who was currently unable to comply.

The Court’s decision could be a grim omen for current Supreme Court precedent on abortion, of which the Hellerstedt ruling was seen as a major victory by pro-abortion activists and a new low for judicial activism by pro-lifers. There remains the possibility of the Court deciding to hear the case while the law is still blocked from taking effect, in which case pro-lifers would have fresh reason to hope Roberts might rule on the side of life.

Despite Hellerstedt accepting the abortion industry’s narrative that admitting privileges are medically unnecessary burdens, 32 nonpartisan medical associations – including the Federation of State Medical Boards and National Committee for Quality Assurance, and covering fields from surgery and anesthesiology to dermatology and radiology – affirmed at the time that admitting privileges are a legitimate medical standard. The pro-abortion justices also ignored the plaintiffs’ own record of health and safety violations.

Last year, a Texas Department of State Health Services report identified numerous offenses at Whole Woman’s Health from 2011 to 2017, including rusty equipment, failing to properly disinfect and sterilize instruments between use, lacking proper written operation procedures, improper storage of hazardous chemicals, unsanitary surfaces, failing to follow up with patients, holes in the floor, and more.

Today’s ruling helps reassure those still unsure how pro-life Trump appointees Gorsuch and Kavanaugh are – but indicates that Roberts may now begin to rule with the Court’s liberal, pro-abortion bloc.

In December, Justices Roberts and Kavanaugh joined the court’s liberal wing in declining to hear Kansas and Louisiana’s appeals defending their efforts to cut off Medicaid funds to Planned Parenthood. Justice Gorsuch voted to take the case, although his own position on abortion remains unknown.