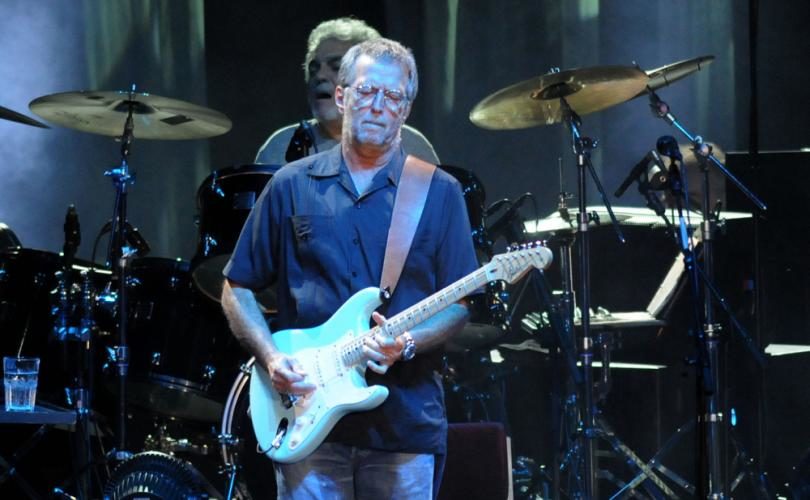 July 22, 2021 (LifeSiteNews) — Legendary rock and blues guitarist, singer, and songwriter Eric Clapton announced earlier this week he would refuse to perform at venues which force concert-goers to prove they’ve taken an experimental COVID-19 shot as a condition for entry.

“Following the PM’s announcement on Monday the 19th of July 2021 I feel honor-bound to make an announcement of my own,” said the 17-time Grammy-winner and former guitarist for such iconic British bands as Cream and The Yardbirds.

The musician was referring to U.K. Prime Minister Boris Johnson’s Monday announcement that his government will “make full vaccination the condition of entry to nightclubs and other venues where large crowds gather.”

Johnson added that “proof of a negative test will no longer be sufficient,” seemingly indicating that there will be no alternatives for those who do not wish to get the vaccine.

“I would remind everybody that some of life’s most important pleasures and opportunities are likely to be increasingly dependent on vaccination,” the prime minister said.

In response to the announcement, Clapton said:

I wish to say that I will not perform on any stage where there is a discriminated audience present. Unless there is provision made for all people to attend, I reserve the right to cancel the show.

The statement was shared on Italian architect and film producer Robin Monotti’s Telegram account July 20, which is also connected with Dr. Michael Yeadon, a former Vice President and Chief Scientist for Allergy & Respiratory of now-vaccine-maker Pfizer.

Yeadon, who worked in the industry for 32 years and has repeatedly warned about the risks associated with COVID-19 shots, recently argued that COVID-19 variants are “irrelevant and being used as propaganda.”

Clapton’s stand garnered a mixture of approval and outrage, with individuals and groups opposed to mandatory vaccination and government intrusion giving their thumbs up to the iconic artist.

For refusing to do concerts which exclude unvaccinated people.

I very much support vaccines, but it should be your choice—not forced upon you. https://t.co/9cQv5zaPiA

Of course, Clapton also had his detractors. Liz Buckley, a label manager at Ace Records, snapped, “Funnily enough, I will not attend shows where Eric Clapton is required.”

Funnily enough, I will not attend shows where Eric Clapton is required. https://t.co/k1O1J3drfV

Clapton’s announcement comes just a few months after he shared his harrowing experience with the AstraZeneca (AZ) COVID-19 shot.

In a letter to Robin Monotti in May, Clapton said that after taking the first “jab of AZ” in February, he “straight away had severe reactions which lasted ten days“

The 76-year-old — who has emphysema — said he was offered and took the second shot six weeks later.

“Needless to say the reactions were disastrous, my hands and feet were either frozen, numb or burning, and pretty much useless for two weeks, I feared I would never play again,” Clapton continued, adding that he also suffers from peripheral neuropathy and believes he should never have taken the injection.

“But the propaganda said the vaccine was safe for everyone,” Clapton said.

Many European countries including Italy, France, Germany, and Spain banned the AZ shot  earlier this year due to the injections’ connection with dangerous blood clots. The advice has subsequently been modified, with some countries permitting the shot for specific higher-risk age groups.

Clapton has been a strong advocate of personal liberty in the face of increasing government control justified as COVID-19 containment.

In December he recorded a new song with friend and fellow rock and blues great Van Morrison entitled “Stand and Deliver,” warning against government overreach.

The lyrics ask “Do you wanna be a free man or do you wanna be a slave?” and warns “Is this a sovereign nation or just a police state? You better look out, people, before it gets too late.”

Clapton told Monotti: “I continue to tread the path of passive rebellion and try to tow the line in order to be able to actively love my family, but it’s hard to bite my tongue with what I now know.”

The musician mentioned another song he was then in the process of recording with Morrison called “The Rebels” which asks “Where have all the rebels gone?”

“Hiding behind their computer screens, where’s the spirit, where’s the soul?” the lyrics say. “I’ve been a rebel all my life, against tyranny and arrogant authority, which is what we have now. But I also crave fellowship, compassion and love, and that I find here. I believe with these things we can prevail.”

Morrison is not set to tour in Great Britain until next year. His current lineup features shows based exclusively in southern U.S. states including Florida, Georgia, and Texas.

As vaccine passports become a reality for residents of the U.K., recent data has suggested that a majority of deaths connected with the so-called Delta variant, now regarded the dominant strain, have been charted in “fully vaccinated people.”

117 deaths were reported, of which 50, or 42.7 percent, were among individuals who were “fully vaccinated,” with 19 deaths (16.2 percent) recorded in individuals at least 21 days after they had received their first shot.