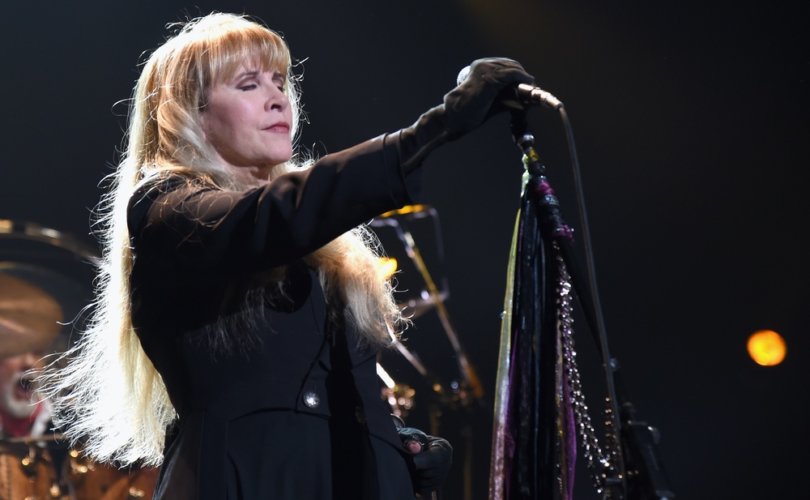 October 17, 2020 (LifeSiteNews) — A two-time inductee of the Rock and Roll Hall of Fame has asserted that the world would have been deprived of the happiness and healing her singing career produced if she had not had an abortion four decades ago.

Legendary singer Stevie Nicks said in a recent interview with The Guardian that if she hadn’t aborted the child she conceived with Eagles singer Don Henley in 1979, she's “pretty sure there would have been no Fleetwood Mac.”

“There’s just no way that I could have had a child then, working as hard as we worked constantly,” said Nicks.

“And there were a lot of drugs, I was doing a lot of drugs … I would have had to walk away,” said the now-72-year-old singer. “And I knew that the music we were going to bring to the world was going to heal so many people’s hearts and make people so happy.”

“And I thought: you know what? That’s really important,” she claimed. “There’s not another band in the world that has two lead women singers, two lead women writers. That was my world’s mission.”

“Abortion rights, that was really my generation’s fight,” said Nicks, who declared that recently deceased Supreme Court Justice Ruth Bader Ginsberg was her hero. “If President Trump wins this election and puts the judge he wants in, she will absolutely outlaw it and push women back into back-alley abortions.”

Many were appalled by Nicks’ revelation, and disagreed with her assessment that her career was more important than loving and caring for the child she aborted.

Stevie Nicks says Fleetwood Mac wouldn’t have become what it did without her abortion and that her music was more important for the world.

Kylie Jenner got pregnant at 19, had her baby, and still became the world’s youngest billionaire.

You don’t need abortion to be successful

Justifying murder. What da!? Not cool.

Stevie Nicks: There‘d Be No Fleetwood Mac ‘If I Had Not Had That Abortion‘ https://t.co/pqXSKeWxHA via @BreitbartNews

And that's the problem with our society — children being viewed as a burden, as something that will hinder you from achieving your goals.

Children and success are NOT mutually exclusive. (See Amy Coney Barrett as the perfect example).https://t.co/n0gqVS0DMM

Nicks, who reportedly has had a total of four abortions, is not without regret.

“To give up four [babies] is to give up a lot that would be here now,” admitted Nicks in a 1992 Vox Magazine interview.

“So that really bothers me, a lot, and really breaks my heart. But they’re gone, so…” she continued. “But I couldn’t because I was too busy. And I had all these commitments.”

“Some women have no interest in becoming mothers, but that isn’t the case with Stevie Nicks,” explained National Review’s Kyle Smith.

“She did want to be a mother, very badly,” wrote Smith. “Witness the gently horrifying soft-rock classic ‘Sara,’ the only rock song I can think of in which the singer muses about having actually killed another human being. Neither Bob Marley nor Eric Clapton really shot the sheriff, but Nicks did kill Sara, and that’s what infuses the song with a delirium of regret.”

1
Abp. Viganò: Roe decision is a ‘historic opportunity’ to defend the ‘sanctity of human life’
2
Vatican official at Davos says the Church is implementing the World Economic Forum agenda
3
The pro-abortion movement is becoming so radical, it’s now leaving feminists behind
4
Full list: Abortion now banned in at least 10 states, more to follow
5
These pro-abortion moms illustrate the horrors of the culture of death
Subscribe to Daily Headlines »