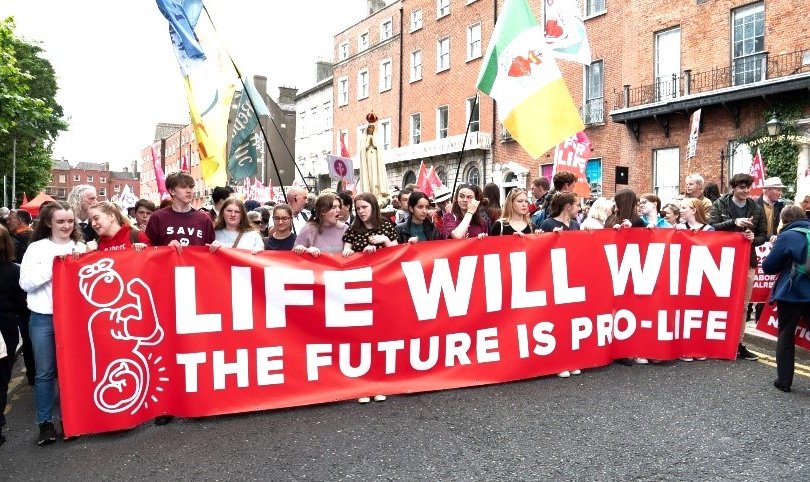 Irish Rally for Life in DublinFacebook

(LifeSiteNews) — Thousands of pro-life Irish gathered July 2 in Dublin for the country’s annual Rally for Life, celebrating the Roe v. Wade reversal in the United States as a sign of hope for restricting abortion in the rest of the world.

“An incredible, momentous, hope-filled day at the Rally for Life on Saturday!” the Rally for Life organization posted. “We are so proud of the THOUSANDS of you who turned out to show that the pro-life movement is alive and kicking — and it isn’t going anywhere!”

Inspired by the U.S. decision to return the issue of abortion to individual states, pro-lifers in Ireland are pushing forward with the intent of reversing the 2018 repeal on the country’s Eighth Amendment, which prohibited all abortions except when it was necessary to save the life of the mother. Four years later, Irish pro-lifers are determined to follow the lead of the U.S. in restricting access to abortion on a national level.

Held barely a week after the U.S. Supreme Court’s historic ruling, the 2022 Rally for Life featured renewed inspiration that reflected the pro-life victory in America. “The North is Next” and “Bye Bye Roe” were among the countless motivational messages shared during the rally.

Among the thousands attending the demonstration, the crowd was led by a group of energetic young people carrying a wide banner that read “Life Will Win.”

Pro-life campaigner Bernadette Smyth, director of Precious Life, gave a speech at this year’s rally celebrating the victory in the U.S. “Thank you, pro-life America,” she said. “We now celebrate the beginning of the end of abortion. The overturning of Roe v. Wade gives hope to the global pro-life movement. After this amazing victory in the USA, we vow to continue in our efforts to make abortion illegal and unthinkable again.”

In 1983, the dominantly Catholic country passed an amendment to the nation’s constitution that banned most abortions (some exceptions were admitted if the mother’s life was in danger).

Legally, abortion was almost entirely outlawed. No exceptions were allowed for cases of rape, incest, or developmental abnormalities. Over the next 20 years, five votes to repeal the amendment were unsuccessful. The pro-life law was advertised as one that “violated a pregnant woman’s human rights by forcing her to choose between carrying her fetus [baby] to term — knowing it would not survive — or traveling abroad for an abortion,” according to a 2016 article in The New York Times. That attitude was sparked by deaths of pregnant women who would have allegedly lived had they been granted access to abortion in Ireland.

In 2012, the death of Savita Halappanavar put even more pressure to allow for abortion on demand in Ireland. The young woman’s name was publicly and frequently associated with the country’s Eighth Amendment. Although the media reported that Halappanavar died of sepsis as a direct result of being denied an abortion due to the Catholic country’s law, investigations indicated that an abortion would not have saved her, as previously reported by LifeSiteNews.

Since the latest successful repeal of the Eighth Amendment, pro-life advocates have continuously worked for a reversal of the 2018 decision as well as a preservation of the current waiting period as outlined in the amendment. While abortion on demand is now legal through the first 12 weeks of pregnancy (and accessible for children with disabilities or health risks to the mother in later weeks), the law also requires a three-day waiting period between an abortion consultation and procedure. This condition has proved to be lifesaving for babies whose mothers decide during that time to choose life.

According to the Rally for Life website, this year’s protest included a specific goal “to demand that the three-day period of reflection before abortion, which saved almost 900 babies in a year, is retained.”

After years of tension and deception about abortion access and consequences, Irish pro-lifers are continuing their efforts to reverse the repeal on the country’s pro-life amendment. The major shift in U.S. abortion legislation sparks newfound hope and motivation.