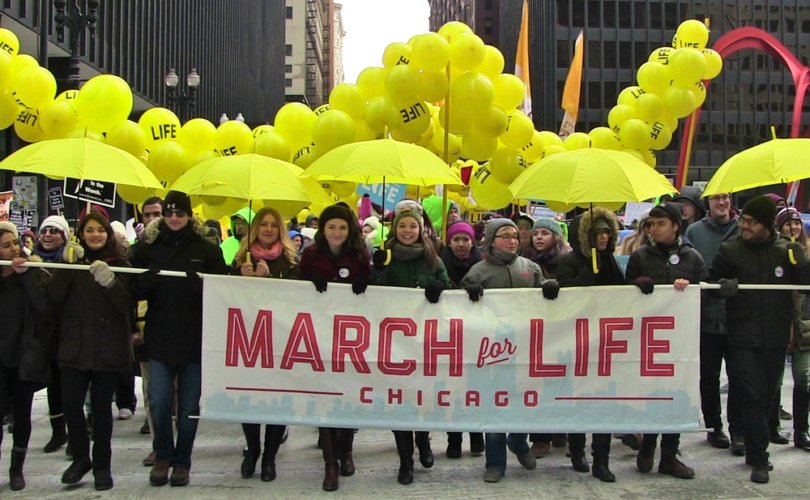 Approximately 6,000 people attended the rally and march, the biggest annual pro-life gathering in the American Midwest. There were babies in strollers, children, students and adults of all ages well-bundled up against the cold.

After a rally in Chicago’s Federal Plaza, the throng walked around the city’s Loop district to the sound of high school drum bands. Their aim was to show their belief in the sanctity of life and to call for an end to abortion.

March for Life Chicago Board of Directors President Dawn Fitzpatrick was delighted by the record turn-out. “This March for Life Chicago drew people of all ages, from across the Midwest,” she said. “Some come singing, chanting and dancing. Some come quietly praying. They are from all walks of life, but they have one thing in common, they know that love saves lives and that abortion is one of our culture’s gravest ills.”

Fitzpatrick added, “This March for Life for Chicago bears witness to the fact that killing a child in the womb is never an acceptable solution to any problem. We call upon religious, civic and community leaders to renew every effort to build a nation and culture dedicated to protecting life at every stage and eliminating the violence of abortion.”

The keynote speaker at the rally was former Planned Parenthood director Ramona Trevino. She told the crowd that “the deadliest thing in the world is indifference.”

“It is love that brings us here today,” she said. “It is love that reaches out to a woman in crisis that says I’m here for you, to help you.” Trevino added that love is what is needed to counter the indifference that “makes it possible for Planned Parenthood to perform over 300,000 abortions a year and for politicians to fund Planned Parenthood to the tune of half a billion dollars of our money.”

“To Planned Parenthood, I say stop perpetuating the lie that we need abortion,” she said.

Ives criticized Illinois governor Bruce Rauner for signing into law a bill, HB 40, that expanded the funding of abortions to women on Medicaid and state employees with tax dollars. Hitherto Illinois taxpayers funded only the abortion deaths of babies conceived of incest or rape or whose continued existence endangered the lives of their mothers. Ives took hope, however, from the large numbers of teens and young adults in the pro-life march, seeing in them the future of the pro-life movement.

US Congressman Peter Roskam spoke of the pro-life commitment of Statesman Henry Hyde, a legislator whose strong faith brought the long-standing federal protections against abortion provided by the Hyde Amendment. US Congressman

Dan Lipinski said that, “Being pro-life is being pro-woman,” a sentiment particularly apt in the wake of revelations concerning widespread sexual harassment in Hollywood and other left-wing institutions.

State Senator Dan McConchie was also present at the rally.

The Students for Life of Illinois were at the head of the march, holding a banner reading “March for Life Chicago” under a row of bright yellow umbrellas. Giant arches of yellow balloons floated overhead as the crowd cheered over the sound of the drummers from Carmel Catholic High School.

“I love being able to join thousands of others and celebrate my passion for life,” said Carina Greico, a junior at Loyola University. “The pro-life side is always so hopeful. We carry around yellow, which symbolizes joy.”

Greico said she was moved by Students for Life Illinois intern Sarah Storto’s talk. Storto had described how the contempt for life shown by fellow students at Loyola University inspired her to become a pro-life activist.

“[Her speech] represented the pro-life youth and the struggles and challenges that college students face everyday on college campuses,” explained Greico. “Her talk was extremely moving!”

Anna DeMeuse, a senior at Marquette University, was inspired by the “zeal” of the marchers.

“The March for Life Chicago was a wonderful way to tangibly radiate the love, joy, and hope of life,” she said. “It was beautiful to boldly take the pro-life message to the streets of Chicago.”

“What sticks out in my mind is how passionate the marchers were,” DeMeuse continued. “It was inspiring to  see young and old alike come together with such zeal for the pro-life movement.”

There was a counter-protest of about a hundred pro-abortion demonstrators standing on the opposite side of Dearborn Street. Greico remarked that their protest was “dark” compared to the pro-life celebration.

“The other side… seems to be more dark,” she said during the rally. “They are dressed in darker colors such as black and purple and are holding signs that are profane and inappropriate.”

The pro-life rally was multiracial and ecumenical, including representatives of several Christian communities, including Evangelicals,  “Anglicans for Life”, the North American Lutheran Church Missouri Synod, the Orthodox Church of America, and the Institute of Christ the King Sovereign Priest. African-American marchers held signs indicating that “Abortion=Genocide.” A second contingent of Students for Life held a large banner reading “We Are Abortion Abolitionists.”

Many carried a variety of pro-life placards in their gloved or mittened hands. Although the march was bipartisan, Trump loyalists made their presence known. A large “Trump” flag made an appearance between an Israeli flag and the Stars and Stripes. A large banner pronounced “MAGA.” Donald Trump has been called the most pro-life American president since Roe v. Wade, eclipsing even Ronald Reagan.