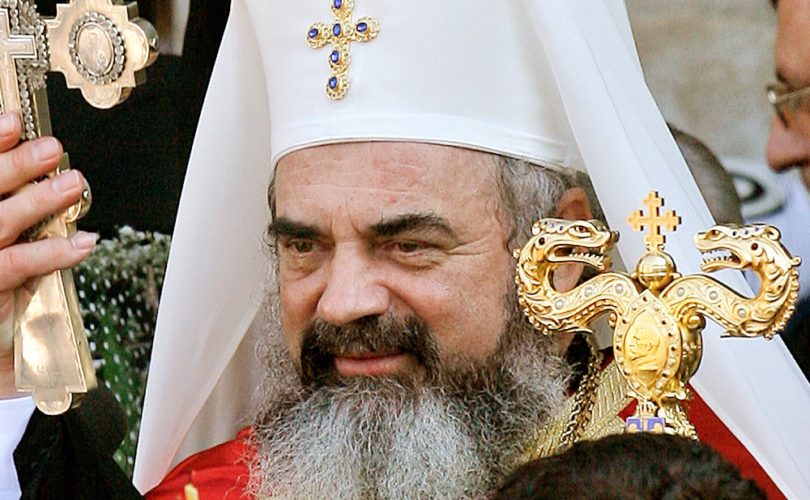 The Orthodox leader added that Christians must “resist some new family models that consider the natural man-woman union only one model among others.”

Every year at this time, Orthodox Christians celebrate Epiphany, the baptism of Christ, and bless holy water for use throughout the year. Parish priests go from house to house, blessing the homes of the faithful. This year, clergy used the occasion to ask folks to back amendments to the Romanian constitution.

The push seeks to gather half-a-million signatures in a bid for public support to confirm marriage in the Romanian constitution as exclusively heterosexual and monogamous. Over 85 percent of Romanian citizens belong to the Orthodox Church.

Romania does not recognize homosexual unions. The Romanian constitution reads “between spouses” when referring to marriage. In days past, that was clear enough for common understanding. Not so today, say Church leaders.

In 2013, Romanian anti-Christian activist Remus Cernea proposed legislation legalizing same-sex “marriage,” which was met with fierce opposition from Orthodox Church leaders. Archbishop Teodosie Petrescu said that Cernea was led into temptation by the Devil and that he requires the services of a psychologist and of a priest.

The Orthodox Church enjoys the trust and support of the Romanian people generally. Cernea's proposal was soundly rejected.

In Croatia, a similar constitutional referendum supporting natural marriage passed with 65 percent of voters in favor.

In the United States, several Orthodox leaders have been outspoken proponents of marriage. Metropolitan Joseph says that Orthodox activism in support of marriage is needed “in order to dispel confusion which has been stirred up by our secular culture.” His Eminence said that the Orthodox Church “can never embrace” same-sex unions, and he urged Orthodox faithful to make their voices known in the public square until “the Orthodox Church is a leading voice for marriage in this nation.”

Joseph noted times in history when Christians have corrected society or changed culture for the better. “Throughout the history of our faith, our holy Fathers have led the Orthodox laity to gather in unison to preserve the faith against heresy from within, and against major threats upon societies from without.”

“The Patriarch has got it right,” Fr. Johannes Jacobse, Founder of the American Orthodox Institute, told LifeSiteNews. “It takes one man and one woman create a new child and constitute a family.”

Fr. Jacobse, who serves on the boards of Hexaemeron and the First Things Foundation, explained, “The state has a role in affirming natural marriage, but it does not have the authority to declare that homosexual couplings do in fact constitute a marriage since natural marriage predates the rise of modern nation states and governments.”

“This governmental overreach represents a collapse of culture, and the patriarch is right to resist it,” Fr. Jacobse concluded.