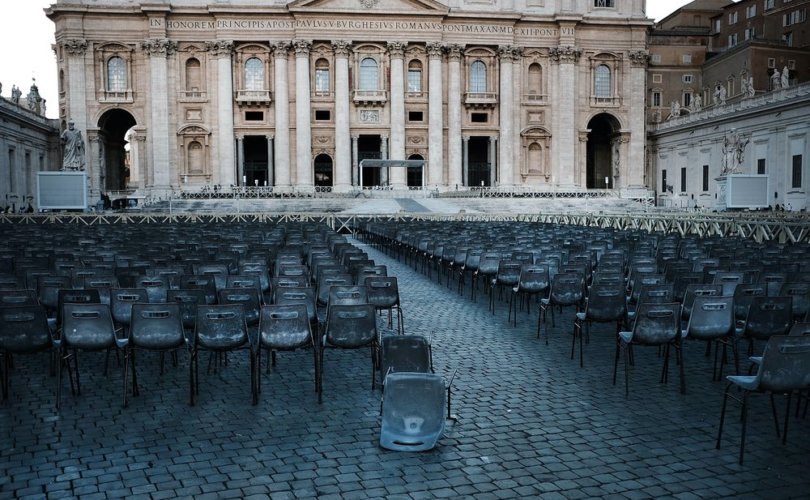 ROME, Italy, March 10, 2020 (LifeSiteNews) ― The coronavirus epidemic in Italy and government measures to slow the contagion have led to a decision to cancel the 2020 Rome Life Forum in May and postpone the Roundtable to October, organizers have announced.

“While we hope and pray that the virus threat will be overcome very soon, it is impossible to say anything certain at this stage,” Maria Madise of Voice of the Family told LifeSiteNews.

“And although the Forum and the [Rome] March for Life are nine weeks away, we simply do not know how the situation will develop in Italy and in Europe.”

Madise reported that all public events in “the whole of Italy” are suspended until April 3 and may be suspended even longer. Although believing Rome might be a safe travel destination in May, she said that the current circumstances mean “it would be difficult to go ahead with an international event on the scale of the Forum.”

The International Director for the Society for the Protection of Unborn Children, Madise revealed that several events are being planned for October in Rome. These include a youth program and pilgrimage, as well as the roundtable discussion of the Vatican’s Global Education pact.

“In the meantime, let us remain united in prayer for Italy and for our beloved Church, while we are so clearly reminded of our complete dependence on God and His Divine Providence,” she requested.

The Voice of the Family youth program offered 20 young people two days of intensive conferences in Rome last autumn. Every participant was a devout Catholic discerning a way to serve the culture of life. LifeSiteNews editor-in-chief and co-founder John-Henry Westen, Professor Roberto De Mattei of the Lepanto Institute, and Virginia Coda Nunziante of the Roman March for Life were among the speakers. Daily Mass in the Extraordinary Form was offered, and the program ended with the Seven Churches Pilgrimage of St. Philip Neri.

Madise, who attended, recalled that the concluding prayer of the pilgrimage took place before the Salus Populi Romani (“Health of the People of Rome”) icon in the basilica of Santa Maria Maggiore.

“The image was carried by Pope Gregory the Great in 590 in a procession he led to beg for an end to one of the worst plague epidemics that had struck the city of Rome,” she wrote.

“Since the pestilence was overcome, with the help of St. Michael the Archangel, the icon is venerated as a protector of Rome,” she continued.

“However, Salus Populi Romani applies to the health of the universal Church: Mary holds in her arms the Savior, the salvation of all.”

Madise told LifeSiteNews that she believes we are in a time of trial and chastisement in which we are required to give up things we enjoy. For her this includes the fellowship orthodox Catholics enjoy in Rome during the Life Forum.

“When we are so isolated anyway, it’s a true sacrifice to give up fellowship,” she said.

Madise revealed that Voice of the Family will be releasing more detailed descriptions of its plans for October in “the very near future.”