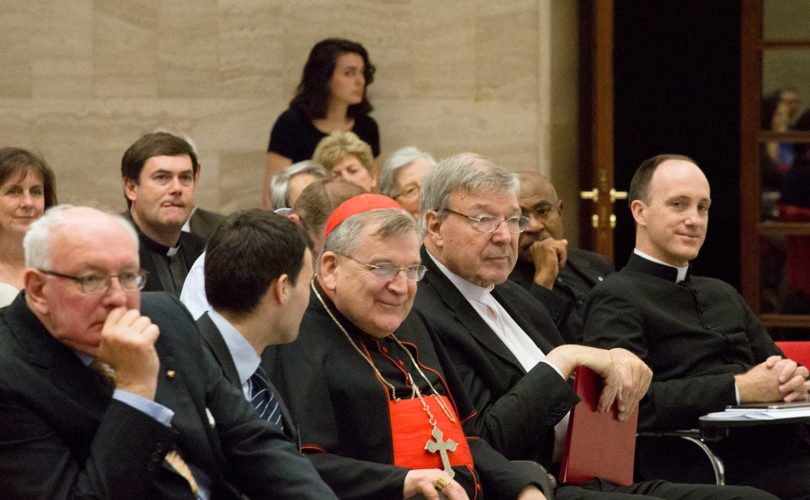 ROME, March 19, 2018, (LifeSiteNews) – Among the esteemed speakers at the upcoming, much anticipated Rome Life Forum are Kazakhstan Bishop Athanasius Schneider and Raymond Cardinal Burke, whose talks will focus on the theme of The True Understanding of Conscience.

This promises to be an historic event, exerting a positive influence within the Catholic Church, now facing the daily, relentless penetration of heterodox ideas challenging magisterial truth and established pastoral practices, proven over millenia.

Reserve your place at the Rome Life Forum here.

Pope Francis, the German Bishops, and others have rocked the church with numerous controversial statements, triggering moral issue earthquakes––not only in the Catholic Church––but around the entire world.  As a result, the role of the conscience of the individual believer has become more crucial than ever.

As such, while exploring the authentic teachings of the Church on conscience, Rome Life Forum presenters will also zero in on the threats posed by false theories now being widely professed within the structures of the Church.

Cardinal Burke will deliver a keynote address on the “Social Reign of Christ the King.”

Msgr. Livio Melina of the John Paul II Institute, Italy, will speak on “Conscience with reference to the legacy of late Cardinal Caffarra,” one of the four “Dubia Cardinals” who unexpectedly passed away last year.

Dr. Isobel Camp, professor at Rome’s Angelicum, will focus on the “Quest for truth, conscience and the pursuit of eternity.” Professor Roberto de Mattei, president of Lepanto Foundation, will speak on “Resistance to unjust conscience in doctrine and history.”

Scripture tells us that “the whole world is in the power of the evil one,” (1 Jn 5:19; cf. 1 Pet 5:8) and so Christian life is characterized by constant spiritual warfare.  So it comes as no surprise that those striving to follow Christ find themselves living on a battlefield.

The Baltimore Catechism teaches us, “We are called soldiers of Jesus Christ,” so that we might know how to engage with our very real enemy and emerge victorious.

We are the “Church Militant.”

Bishop Athanasius Schneider’s talk, “The Church Militant: A Forgotten Truth,” will describe our duty to fight against sin; against the errors and the temptations of the world; to battle against errors inside the Church; and to fight against ambiguity in doctrine.

And though we are constantly engaged in warfare, the good news is that as soldiers of Christ we belong to a victorious army.

The fifth annual Rome Life Forum will be held at the Pontifical University of St Thomas Aquinas (the Angelicum) from May 17-18, 2018. It will be followed by the Rome March for Life on Saturday, May 19.

In addition to Bishop Schneider and Cardinal Burke, the Forum will be addressed by a other prestigious speakers including: Msgr. Livio Melina, Fr. Thomas Crean OP, Professor Roberto de Mattei and Professor Isobel Camp.  The event is sponsored by Famiglia Domani, Family Life International NZ, LifeSiteNews and the Society for the Protection of Unborn Children.

The Forum is open to all those who have leadership roles in the pro-life movement or in movements concerned with the defense and diffusion of Catholic moral and social teaching. More information, and the booking form to reserve a place, can be found here.