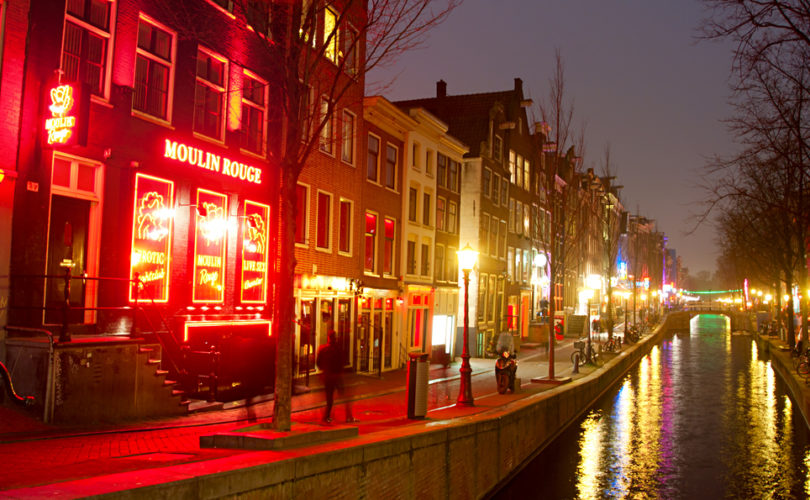 ROME, February 12, 2015 (LifeSiteNews.com) – Days after the Vatican announced a “world day of prayer” to stop human trafficking, the leftist mayor of Rome, Ignazio Marino, has said that the city will be establishing a “Red Light” district where prostitution will be tolerated and “regulated.”

Starting in April, the city plans to designate a non-residential business neighbourhood in the south of Rome as a “tolerance” zone where prostitutes may ply their trade. The city will provide health and social work officials to promote “safer sex.” Police will be ordered to levy fines of 500 € for women caught seeking men outside the designated area.

If it is considered a success, there are plans to expand the prostitution zones to three other areas of the same neighbourhood of Rome. Marino said that the proposal will take highly visible street prostitution away from parks and other public places where families and children go.

Julia Storm, deputy leader of the Democratic Party in the city council, said, “The institution outright of some areas in Rome as ‘Red Light’ cannot resolve the issue of prostitution. Indeed, it might even appear to legitimize a phenomenon that must be fought.”

Francesco Rutelli, a former mayor of Rome and far-left European politician associated with the Greens and Radicals, also criticized the plan. “Are you aware that the Italian law punishes those facilitating prostitution?” he asked Marino.

Marino has made his mark in Italian national politics as a champion of leftist social policies by registering same-sex partnerings on Rome’s city marriage registry. He told media on Friday that the prostitution zone plans were part of efforts to battle sex trafficking that is thought to be rife throughout Italy.

But a study of data from 116 countries by researchers at London School of Economics and the University of Heidelberg make nonsense of the claim that “regulation” is a way to stop human exploitation in the “sex trade.” The study, published in the journal World Development, found that legalizing prostitution significantly pushes up the prevalence of the phenomenon of human trafficking.

Two market forces are at work, pulling in opposite directions: “The scale effect of legalized prostitution leads to an expansion of the prostitution market, increasing human trafficking, while the substitution effect reduces demand for trafficked women as legal prostitutes are favored over trafficked ones,” the researchers said.

“Our empirical analysis for a cross-section of up to 150 countries shows that the scale effect dominates the substitution effect. On average, countries where prostitution is legal experience larger reported human trafficking inflows.”

The act of selling sex is legal in Italy, but pimping and owning brothels are crimes. The changes since the 1990s to immigration regulations throughout the European Union has contributed to a huge and apparently uncontrollable problem with human trafficking.

Italy, with its long and difficult-to-police coastlines facing Africa on one side of the peninsula and the impoverished post-Soviet Balkan countries on the other, presents an ideal staging location for traffickers bringing people for forced labor to other parts of Europe.

Documents from the US State Department say, “Children subjected to sex trafficking in Italy are from Romania, Nigeria, Brazil, Morocco, and Italy, specifically Roma and Sinti boys who may have been born in Italy.”

A UN report says that “the most common form of human trafficking (79%) is sexual exploitation” and that “worldwide, almost 20 per cent of all trafficking victims are children.” It adds that in West Africa and some parts of Asia, “children are the majority” being up to 100 percent of those persons sold into slavery.

A 2010 briefing paper on transnational crime from the Washington-based think tank Global Financial Integrity, estimated that globally, human trafficking for sex or forced labor is an industry worth $31.6 billion US a year. Moreover, trafficking in human beings is associated with billions more in other criminal activities such as drug and weapons trafficking that contributes to a vast international criminal “shadow” economy, comprised of an “illicit flow of goods, guns, people, and natural resources” worth approximately $650 billion per year.

The State Department estimates that as many as 27 million people a year are trafficked for forced labor, with the great majority, 82 percent, being for the “sex trade.”