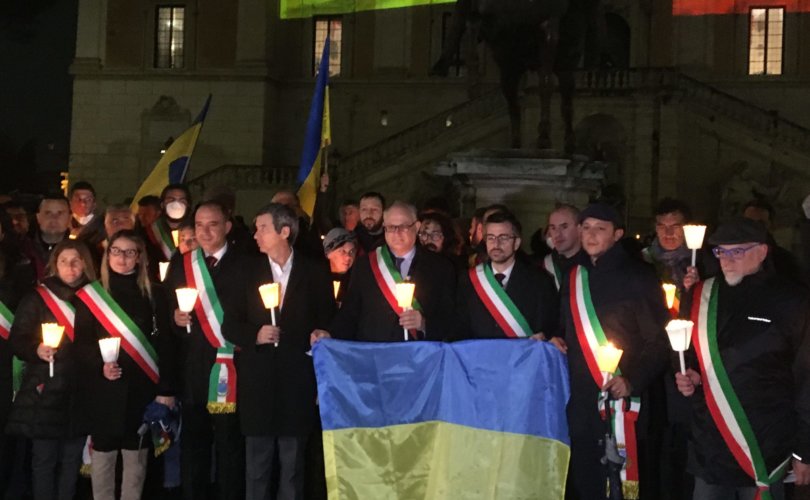 ROME (LifeSiteNews) — Italians gathered by candlelight at Rome’s city hall Friday to call for peace in Ukraine following the Russian invasion and to show solidarity with the war-torn country.

The event was the second candlelight gathering for peace in Rome, organized by the mayor of the city, Roberto Gualtieri. Municipal officials were present wearing sashes with Italy’s colors. The Ukrainian flag and the peace flag were projected by light onto the façade of the city hall, and Ukraine’s colors, blue and yellow, were also projected onto the Colosseum nearby.

The peace flag of seven colors (not to be confused with the homosexual pride flag, which does not have azure and has its colors in the opposite order) was first carried in Italy at a peace march in 1961. It was inspired by similar multi-colored flags used at the time in demonstrations to protest the use of nuclear weapons.

As reported by local news, the mayor said of the event on Friday: “It will be an opportunity to reaffirm our support and closeness to the Ukrainian people at this difficult time. I am sure that many mayors and administrators from all over Italy will participate to demonstrate strongly the unity of our country for peace and against a very serious and unacceptable military aggression.”

The candlelight witness to peace comes as Rome sets up an emergency task force to provide aid and hospitality to Ukrainian refugees.

Condemning the aggression of Russian President Vladimir Putin against Ukraine, the declaration states, “This invasion is one of the most serious threats to peace and security in Europe since World War II.”

In the pact, the mayors promised “resources, support and help to the Ukrainian population. We stand in solidarity with them in the struggle for freedom and democracy.”