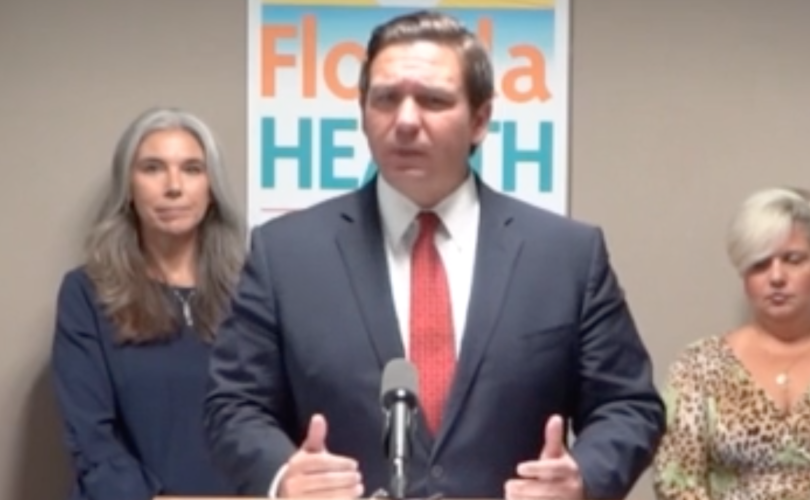 (LifeSiteNews) – With President Joe Biden’s promised COVID-19 vaccine mandate for American businesses set to be issued by as early as next week, the governors of Florida and Oklahoma have announced that they already have plans in the works to challenge the “unconstitutional” federal mandates in court as soon as the rules are made public.

Oklahoma Gov. Kevin Stitt and Florida Gov. Ron DeSantis both characterized Biden’s plan to enact the controversial employer vaccine mandate across the country as “government overreach” that would hurt their state economies and individual workers, many of whom have been brave front-line workers protecting their communities during the COVID lockdowns.

Biden announced last month a series of sweeping COVID-19 vaccine requirements, impacting more than 100 million Americans, including tens of millions of workers in the private sector.

“This administration has no respect for individual freedoms,” Gov. Stitt said in a video  message released yesterday.  “I can’t believe we have a president who wants to force Americans to choose between a vaccine and their job. The people this is affecting aren’t just statistics, they’re real Oklahomans, with real concerns. They’re brave nurses and caretakers, they’re expectant mothers and fathers, they’re first responders and brave law enforcement [officers].

“Getting the vaccine is a personal choice. Period.”

“Static, one-size fits all mandates simply do not fit the reality we’re in today,” the Oklahoma governor said, taking care to mention that not only are alternative treatments available, but natural immunity also plays an important role in protecting against COVID.

Stitt said it’s not the government’s job to dictate policy to private companies. “Businesses should have the freedom to make decisions based on their circumstances.

“As your governor, I will always stand up for your life, liberty, and pursuit of happiness.”

There are currently no rules that require employers to mandate the COVID-19 vaccine for employees. I urge Oklahoma employers to disregard the Biden Administration’s wishes to the contrary. In the event federal emergency rules are issued that place such an unlawful demand upon employers, our office will be joined by other state Attorneys General across the country to quickly sue and seek an injunction against any implementation or enforcement.

Oklahomans should have the right to make their own personal health decisions for themselves and their families. Employers that are mandating vaccines are unfortunately doing so upon their own initiative. Religious, medical, and personal exemptions should be uniformly approved by those employers at the very least.

“We have a responsibility at the state level to do whatever we need to do legislatively to protect Floridians from mandates that could result in them losing their jobs,” asserted Gov. Ron DeSantis during a press conference yesterday.

“It’s fundamentally wrong to be taking people’s jobs,” and “It’s not good policy to destroy someone’s livelihood,” said DeSantis, noting that many would simply fall out of the workforce.

He also emphasized that it’s not good policy for the federal government to unilaterally impose a mandate that federal agencies do not have authority to impose.

DeSantis spoke about his recent intervention in the city of Gainesville to protect police officers, utility workers, hospital staff and others “who have been on the front lines helping our communities for the last year and a half,” many of whom now possess natural immunity as a result of already having had COVID, yet they were being given an ultimatum between receiving the abortion-tainted vaccine or keeping their jobs.

Gainesville ultimately withdrew its COVID-19 vaccine mandate for workers after pressure from the DeSantis administration and a court ruling against the policy last month.

“We are not going to allow our first responders and government employees, many of whom have been on the front lines for over a year and a half, to be cast aside by local politicians’ mandates,” DeSantis said in a press release. “This reversal by the City of Gainesville is a victory for liberty.”

“Let’s protect people’s jobs. Let’s protect their ability to make their own decisions,” said the Florida governor, “and let’s not have Biden come in and effectively take away the jobs of people who have been working hard throughout this entire pandemic.”

“Biden’s mandate on private businesses will go down,” he predicted.