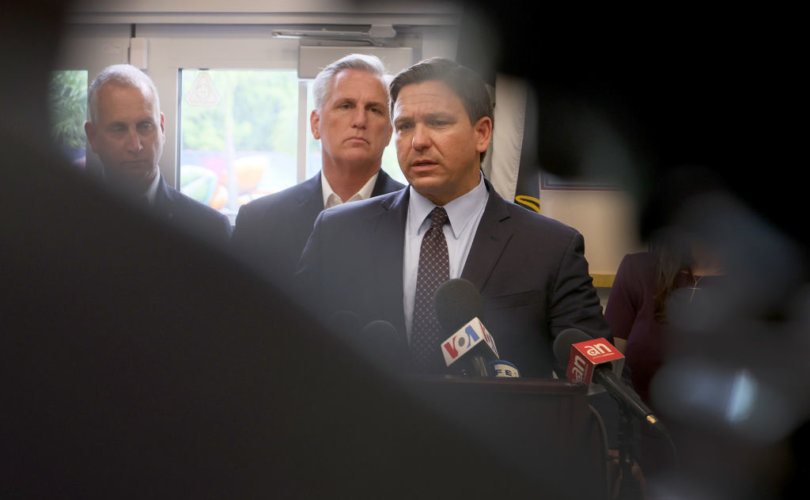 (LifeSiteNews) — In a Thursday press conference just after the Biden administration issued its rule mandating large private employers force their employees to get the COVID-19 jab or submit to frequent testing, Florida’s Republican Gov. Ron DeSantis announced his state’s plans to fight the requirement, warning the sweeping mandate is “just the tip of the iceberg.”

“A year and a half ago we started with 15 days to slow the spread, and now it’s gone to get jabbed or lose your job,” DeSantis said.

“Individuals should make informed choices about their own health care,” he added. “They shouldn’t be coerced into getting a jab.”

Arguing that no employee should have to choose between getting a shot and keeping their job, the governor suggested that if the broad mandates are allowed to stand, those who have become “fully vaccinated” will soon be required to get additional injections to keep their livelihoods.

“This is just the tip of the iceberg,” he warned. “It’s going to get more restrictive, there’s going to be more power brought to bear going forward if we don’t stand up now and fight back.”

We started with 15 days to slow the spread, now they are forcing you to get a jab or else lose your job.

Florida will fight back. pic.twitter.com/0ykfRAAcDI

As the effectiveness of the COVID-19 drugs on the market has plummeted, falling well below the initial reported efficacy rates, the Centers for Disease Control and Prevention (CDC) has already signaled it may adjust the definition of “fully vaccinated” to include at least a third shot.

“If you’re eligible for a booster, go ahead and get your booster,” she said.

DeSantis, who many see as a contender for the U.S. presidency in 2024 and who is anticipated to easily win re-election as governor of Florida in 2022, suggested that “[t]hose individuals who have gone through a normal vaccination series for COVID — you will be determined to be unvaccinated very soon.”

“They’re going to tell you: ‘You have to get a booster, otherwise you could face loss of employment or either types of penalties,” he said. “So that is going to happen. They’re not putting that in the rule, but they’re already asking for feedback on how to do this going forward.”

The Florida governor made the comments while laying out a legal strategy to challenge the federal government’s jab mandate for businesses with 100 or more employees.

Issued Thursday through a White House directive to the Department of Labor to come up with an Emergency Temporary Standard (ETS) via the Occupational Safety and Health Administration (OSHA), the mandate would force employers to require workers to either become “fully vaccinated” or submit to frequent testing and wear a mask while indoors on the job.

The mandate was outlined in a 490-page document and threatens steep penalties for noncompliant employees and businesses.

Workers who choose not to get the experimental shot would face termination from their positions, while employers who refuse to enforce the government’s rules could be hit with serious financial penalties of $13,653 per violation or, for repeat offenders, up to $136,532 per offense.

“[W]e’re supposed to be ‘a government of laws, not a government of men,’’’ said DeSantis in his Thursday press conference. “This is 500 pages of ‘a government of a bureaucracy.’ A government that is being run by executive edict not in accordance with the typical constitutional processes. The state of Florida is going to respond, and we will combat the OSHA rule.”

DeSantis announced that the state of Florida would be joining with Georgia, Alabama, and private plaintiffs to file legal action against the federal government for the mandate.

In addition to Florida, 26 other states have filed suit against the Biden administration for its broad OSHA mandate, which many have called “unconstitutional” and an abuse of power.

“This is a rule that is not consistent with the Constitution, and is not legally authorized through congressional statutes,” DeSantis said, contending that the unwieldy rule is “an attempt to shoehorn policy through the bureaucracy.”

“There is no federal police power. The federal government can’t just unilaterally impose medical policy under the guise of workplace regulation, and that is exactly what they’re trying to do here,” he said.

“I think it’s interesting that this is being done under the guise of emergency power,” DeSantis continued, arguing that if the mandate is necessary due to an “emergency” situation and “grave danger,” posed by the threat of the virus to unvaccinated employees, “why did it take you two months to issue the rule?”

The OSHA Rule was made under the guise of “grave danger,” yet it took two months to draft and won’t go into effect for another two months.

This is an abuse of power. pic.twitter.com/gH0opfHfeJ

The Florida governor then pointed out that many Americans have acquired natural immunity to coronavirus, making vaccination for many unnecessary.

According to DeSantis, data supporting natural immunity suggests the OSHA rule is not following “the science,” since “they reject immunity through prior infection.”

“They reject the Israel study and all the very strong studies that have come out that show people that have recovered from COVID have strong protection. They totally cast that aside, and they make no accommodation or acknowledgement of that in any way, shape, or form,” DeSantis said.

“But ultimately, people should be able to make these decisions,” the Florida governor continued. “I don’t think people want this decision yanked away from them. I don’t think they want to allow a precedent, where the federal government could come in and just force you to do what it wants you to do.”

“I just think people are so sick of constantly being bossed around, restricted, mandated, all these different things. We’ve had enough of it, and we want people to be able to make their own decisions,” DeSantis said.

Beyond filing suit against the federal government, DeSantis has taken action within his own state to protect the jobs and medical freedoms of Floridians.

Last month the governor announced the GOP-led Florida legislature would hold a special legislative session to create permanent protections to ensure Floridians can keep their jobs and make their own medical decisions.

Set to begin November 15, the legislation session will also protect parents’ rights to decide whether or not their children should wear masks in school, and prohibit schools from mandating COVID-19 vaccinations or quarantines.

Meanwhile, the Biden administration’s OSHA mandate has hit a major roadblock on its path to implementation.

The federal government has been ordered to respond to the court’s ruling by 5 p.m. Monday.