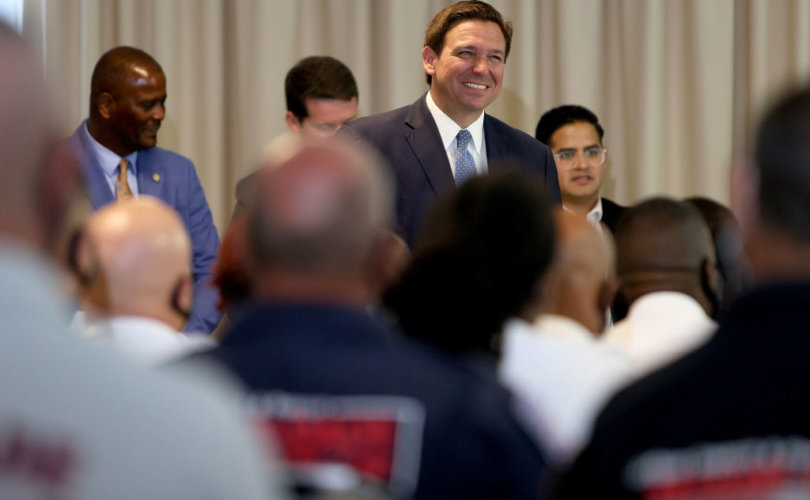 The legal challenge was filed by Gov. DeSantis and Attorney General Ashley Moody and announced during a Thursday press conference in Lakeland, Florida.

“Just months ago Joe Biden was saying that it wouldn’t be appropriate or lawful for the federal government to mandate these COVID shots,” Gov. DeSantis said in a statement.

“But now we have somehow gone from 15 days to slow the spread to three jabs to keep your job,” DeSantis continued. “The federal government is exceeding their power and it is important for us to take a stand because in Florida we believe these are choices based on individual circumstances.”

Watch Live: The State of Florida files a lawsuit against the Biden Administration to challenge their unconstitutional federal contractor vaccine mandate.https://t.co/wIlsfLwT6A

In filing the suit, DeSantis and Moody seek a preliminary injunction to prevent the mandates from taking effect, and demand a declaratory judgement from the court that the requirements are “unlawful.”

According to the lawsuit, which names President Joe Biden along with other administration officials who head up several federal agencies including the Department of Defense, NASA, and the Office of Management and Budget, “the Biden Administration seeks to compel millions of Americans who work for government contractors to receive a COVID-19 vaccine. Nothing in that statute authorizes such a radical intrusion on the personal autonomy of American workers — especially, as is the case here, when many of those workers are officials of a sovereign state.”

On September 9, Biden announced he had signed executive orders imposing strict vaccine mandates for all federal workers and contractors. The orders, which strip out testing options included in earlier mandates, affect some 2.1 million government employees, millions more private sector employees, and contractors who work with the government.

“This is not about freedom or personal choice,” Biden said during a speech announcing the orders. “This is about protecting yourself and those around you.”

Under Biden’s orders, millions of federal employees and contractors face losing their jobs if they refuse to get the shot by December 8.

“I have never seen such blatant disregard for the Constitution or the laws governing our country,” Attorney General Ashley Moody said of Biden’s jab mandates. “President Biden does not have the authority to force millions of Americans to receive a shot, nor does he have the ability to punish Florida economically for not abiding by his authoritarian, unlawful, and unconstitutional executive order.”

“I promised to challenge this gross abuse of power and to stand up for hardworking Floridians and that is exactly why I am suing this president and his reckless administration,” Moody added. “As Attorney General, I have an obligation to defend the rule of law, Florida’s workers, and our state against heavy-handed federal overreach.”

Florida resident Olivia Gregg also gave a statement, explaining that her “husband has been a hardworking, faithful employee with his company for 10 years and has a master’s degree.”

“He works tirelessly to be the sole income for our family, so I can care [for] and raise our kids,” Gregg said. “The possibility of my husband’s job being gone in roughly five weeks is terrifying. We are living in constant fear, questioning our family’s future every single day. It shouldn’t be between a vaccine or a livelihood.”

A press release from DeSantis’ office issued Thursday stated that by filing the lawsuit, the Florida governor is “following through on a promise to take legal action to stop federal overreach and making Florida the first state in the nation to hold the President accountable.”

“The lawsuit seeks an immediate end to the unlawful requirement that federal contractors ensure that all employees have received a mandated injection,” the release reads.

The legal challenge comes after DeSantis announced last week the GOP-led Florida legislature would hold a special session to enact further protections for Floridians against COVID-19 injection mandates from both government and corporate entities.

Click Orlando reported that “[i]n broad terms,” the special session will focus on “holding businesses liable for adverse reactions to vaccines, removing legal liability protections for employers with vaccine mandates and added protections for people who are fired for not being vaccinated.”

“I will not let the heavy hand of government force Floridians to take a shot,” DeSantis wrote in a Saturday tweet. “That violates their constitutional rights, infringes on their medical freedom, and threatens their livelihoods. We will hold a Special Session to fight for Floridians’ freedom. #DontTreadOnFlorida.”

I will not let the heavy hand of government force Floridians to take a shot. That violates their constitutional rights, infringes on their medical freedom, and threatens their livelihoods.

We will hold a Special Session to fight for Floridians’ freedom. #DontTreadOnFlorida pic.twitter.com/b8Owjxniqg

The Thursday press release from Gov. DeSantis’ office also noted that the session aims to “defend the right of parents to opt their children out of school mask and quarantine mandates.”

After DeSantis directed the state’s Department of Health in July to issue an emergency rule banning school boards in the Sunshine State from mandating masks for students, the Florida Board of Education this month stripped funding from eight districts which defied the ban.

The mask mandate ban has been battled in the courts since it was enacted, with a federal judge upholding the prohibition in September, while an administrative law judge this month rejected a request by the Florida Department of Health to dismiss a challenge to the law put forward by six school boards.

The special legislative session will consider ways to legally fortify the ban.

“Governor DeSantis has made it abundantly clear that we have a responsibility to fight back against unconstitutional federal overreach and that is exactly what we will accomplish through this lawsuit and during the upcoming Special Session,” Lieutenant Governor Jeanette Nuñez said. “We look forward to working with Senate President Simpson and House Speaker Sprowls to empower parents, provide protections for employees, and further protect our rights and liberties that we hold dear as Floridians.”

The dates of Florida’s special session are set to be announced in the upcoming days.