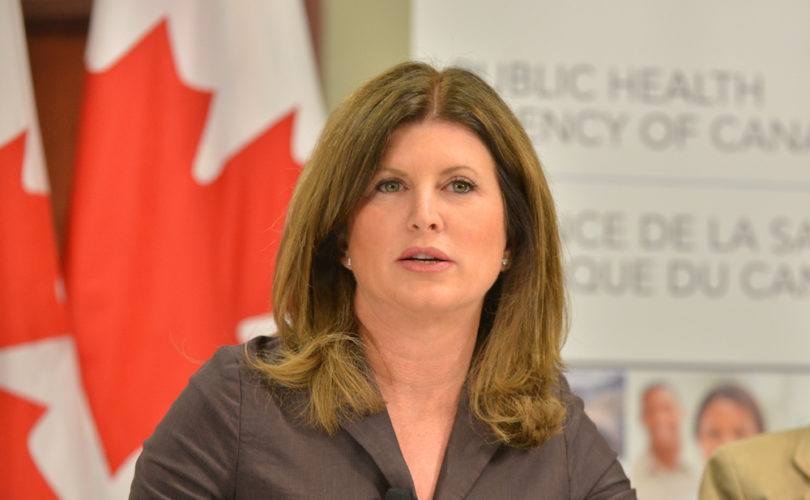 OTTAWA, May 4, 2016 (LifeSiteNews) — Conservative leader Rona Ambrose intervened to quash an already-approved motion to discuss the party’s policy of opposing legislation on abortion at its May 26-28 national convention in Vancouver, according to sources cited in an exclusive report by The Interim, Canada’s life and family newspaper.

And Calgary MP Michelle Rempel may have strongly influenced Ambrose to take the “highly unusual” step of requesting that the policy committee reverse its approval of the measure, called Motion 503.

However, Motion 503 was strongly supported at the riding level and in numerous CPC policy meetings, and the policy committee approved it at an April 22 meeting, according to The Interim editor Paul Tuns.

But MP Rempel, who was present for part of that meeting, told the committee that there was “no place for me in a Conservative Party that opposed abortion,” Tuns’ sources told him.

According to Tuns, Ambrose subsequently asked the committee to meet again in order to nix the motion.

She was afraid that convention delegates would overthrow the longstanding abortion policy, and she wanted to maintain the status quo because she was anxious to avoid a “free-for-all” discussion on the abortion issue in the upcoming Conservative leadership race, according to Tuns.

The committee thereupon held an April 28 teleconference and ditched Motion 503 in a 10 to 3 vote.

LifeSiteNews made several attempts to reach Ambrose and Rempel for comment, but neither had returned calls by deadline.

But Conservative Party communications director Cory Hann denied that Ambrose asked for a special meeting in order to nix the resolution.

“She voiced concern on this, but by no means directed the committee to do anything,” he told LifeSiteNews in an email.

Hann did, however, confirm that “both Rempel and Ambrose provided input at the request of the committee” on what resolutions would be debated at the convention.

As to why Rempel was asked for input, Hann said that he didn’t wish to speculate on behalf of the committee, but that “one could reason she would have been invited back due to her experience as a member of previous National Policy Committees, as well as providing input from a caucus perspective.”

The pro-abortion Rempel had drawn fire as former Prime Minister Stephen Harper’s representative on the committee because she attempted to direct its deliberations by claiming to speak on behalf of Harper and the Tory caucus, according to Tuns.

And while the committee consults with “party members, EDAs and caucus,” it has the final say on what resolutions will make it to the floor of the Vancouver convention, paring down 350 or so resolutions to a “manageable size.”

The decision on resolutions that will be debated is now final, Hann told LifeSiteNews.

Jeff Gunnarson, vice president of Campaign Life Coalition, says the whole episode reveals that the “Conservative Party’s so-called commitment to the grassroots is a farce,” and that the process for deciding what resolutions will be debated at the convention has to change.

“The committee obviously buckled under Ambrose’s suggestion that they drop the abortion resolution,” he told LifeSiteNews.

“Grassroots social conservatives will be livid and hugely disappointed to see that that their hard work has come to nothing, and that they essentially have been shut out of the debate,” added Gunnarson.

At the same time, he urged more pro-life advocates to get politically involved, including joining the Conservative Party, Gunnarson said.

“The solution is not to throw up our hands and quit,” he said. ‘It’s to engage in the process.”