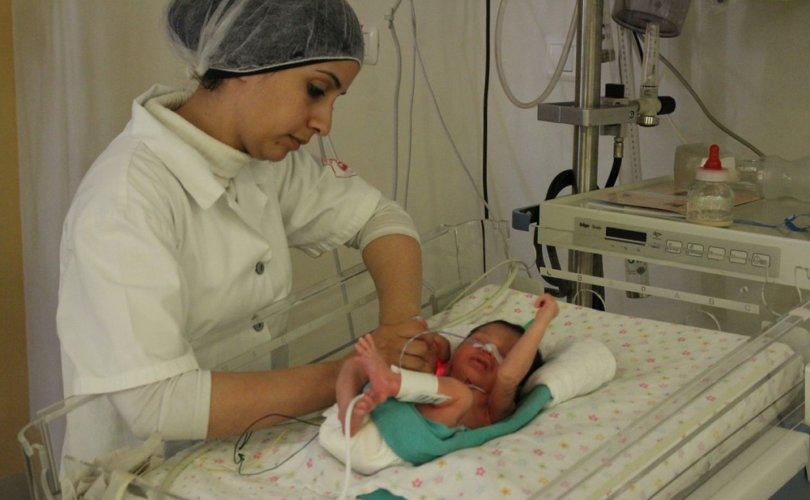 A baby is cared for in Holy Family Hospital's neonatal intensive care unitbirthplaceofhope.org

BETHLEHEM, December 17, 2018 (LifeSiteNews) — Thousands of babies are safely born in Bethlehem thanks to a Catholic hospital named for the Holy Family.

Holy Family Hospital is a Catholic teaching hospital with a state-of-the-art maternity and neonatal critical care center. It serves poor women, children, and babies throughout the West Bank of Palestine. It has been likened to a “modern day manger,” not only because it is located just 1,500 steps from where Jesus was born, but because it offers shelter to families and babies in need. Over 4,300 babies are born there annually.

The hospital is a work of the Order of Malta, the oldest Catholic charity. Every family who walks through the doors is immediately given a 50 percent subsidy, thanks to the hospital’s donors. No one is ever turned away. Meanwhile, the hospital provides work for 170 Palestinians in the impoverished region: it is Bethlehem’s second largest employer.

The president of the Holy Family Hospital Foundation is Michele Burke Bowe, who travels to the hospital often from her home in the United States. Bowe is also the Ambassador of the Sovereign Military Order of Malta to Palestine.

Ambassador Bowe told LifeSiteNews that the French order of the Daughters of Charity founded a general hospital in Bethlehem in the 1880s, but after 100 years they couldn’t run it any more.

Deeply distressed that the people of Bethlehem would no longer have a hospital, the Daughters of Charity called John Paul II for help. He told them that the Order of Malta would take over. When the pontiff consulted the Order of Malta they agreed, but on their terms.

Looking at the needs of the area, the Order decided that the hospital would specialize in neonatal and infant care.

“It took a little time to do some reconfiguring to get it repurposed to be an infant and maternity hospital,” Bowe explained.

The first baby was born in the refurbished hospital in 1990.

Ambassador Bowe grew up in Amman, Jordan and returned often to the Middle East during her studies at Georgetown University. She worked in the field of development until her duties as a mother intervened. Eventually she became a member of the Knights of Malta and then a board member of the Holy Family Hospital Foundation. Now the foundation’s president, the ambassador speaks Arabic, French, Spanish, and Italian. She has five children, too.

“I love babies,” said Bowe. “I have a soft spot for babies.”

The ambassador told LifeSiteNews that one of her most powerful experiences of the Holy Family Hospital happened during the Gaza War, when Bethlehem was a “ghost town.” During her visit, Bowe became friendly with the father of twins born after just 26 weeks’ gestation. One was born weighing 1,500 grams; the other weighed only 700 grams.

Despite the war, the difficulties of travelling from his home in Hebron, and the privations of the Muslim fasting season of Ramadan, the twins’ father, a construction worker, came to visit them every day. Because of the dangers, their mother stayed at home.

“It was the most powerful witness of fatherhood,” Bowe recalls.

She remembers vividly when the father finally dared to touch his tiny daughters. A nurse put the larger girl, finally five pounds, on his lap.

Bowe told the quiet man that although the girls would not remember his daily visits, “their hearts are so touched.”

“Holy Family Hospital taught me to be a good father,” the man replied. Apparently he had been afraid of pain of the girls dying, but the care the hospital showed them inspired him to care for them too.

After three months in the neonatal intensive care unit, the babies were able to go home.

When asked what she would like readers to know about Holy Family Hospital, Bowe’s reply was swift: “That the doors are always open, no matter what the patient’s creed or need.”

She also stressed that the Catholic teaching hospital has raised the level of education and health awareness throughout the region. In addition to its services for mothers and babies, it now has a clinic for older women, who often have not received any medical advice or attention since they last gave birth.

In a region where Christians now comprise only two percent of the population, the hospital is also important because it provides a place where Muslims and Christians can work together, Bowe said.

Meanwhile, it is always Christmas in Bethlehem – and not just because of all the babies. Katie DeMoss of TAN Books told LifeSiteNews via email that it’s a “little known fact” that the Church of the Nativity in Bethlehem celebrates the Christmas Vigil Mass every day of the year.