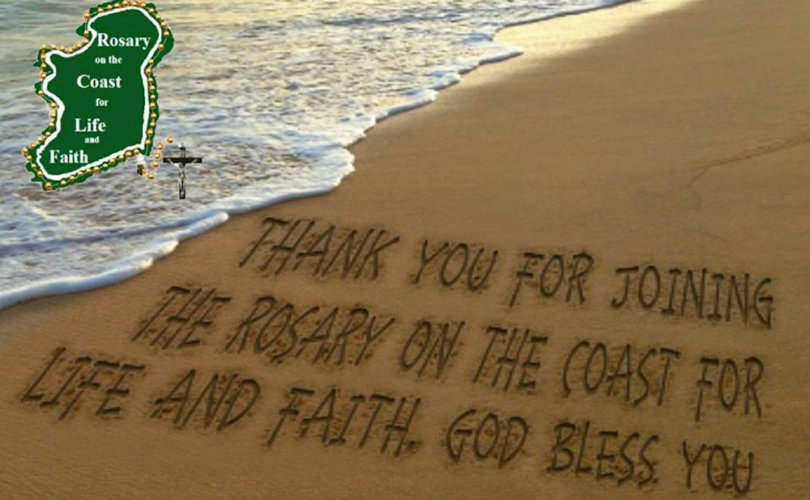 IRELAND, November 28, 2017 (LifeSiteNews) — Approximately 30,000 Roman Catholics gathered along the coasts of Ireland to pray the rosary for life and faith on Sunday.

The Rosary on the Coasts for Life and Faith was a spiritual endeavor asking God to intervene in movements to decriminalize abortion in the Republic of Ireland and Northern Ireland and to renew the island’s commitment to Christian faith.

The Republic of Ireland has experienced a swift and unprecedented transformation in the past 40 years from a devoutly Christian and pro-life society to a secular nation that disdains its Catholic past. Northern Ireland is under increasing pressure from the rest of the United Kingdom to liberalize its abortion laws. Recently, both the UK government in Westminster and the devolved Scottish government have encouraged women in Northern Ireland to have abortions on the British mainland, free of charge and with travel expenses paid.

“Despite yellow weather alerts of freezing snow, sleet and high winds, tens of thousands of people gathered on the coasts of Ireland to pray for the protection of life and the preservation and flourishing of the faith on the island of Ireland,” Sinnott wrote.

In addition to the crowds along the coasts, people all over Ireland prayed the rosary at home and in their churches in communion with them. Also, organizers say people from all over the world — individuals, parishes or prayer groups — joined the Irish in their prayers. Many got up “early in the morning and even during the night to pray at the same time,” Sinnott continued. “Poland, (England) … Scotland, Wales, Italy, France, Japan, Hong Kong, Nigeria, New Zealand, Australia, Canada, Peru and many more countries were represented in what grew to be a worldwide petition to Jesus Christ the King for the protection of Life and the preservation of the Faith in Ireland and the World.”

Sinnott attributes the improvement in the weather before the Rosary, including the drying of many wet areas and even a hint of sun, to the intercession of Mary, the mother of Jesus. With November 26 falling on the last Sunday before Advent, the Feast of Christ the King was celebrated according to the General Roman Calendar of 1969. November 26 is also the Feast of the Miraculous Medal. Those who went to the coasts to pray buried copies of the Miraculous Medal in the ground, encircling the Emerald Isle not only with their prayers but with aluminum tokens of their faith.

The Irish Rosary on the Coasts for Life and Faith was inspired by the Polish Rosary to the Borders on October 7 and a subsequent border rosary event in Italy. The event is estimated to have been the largest gathering of Irish Catholics at a religious event since the visit of St. Pope John Paul II in 1979.