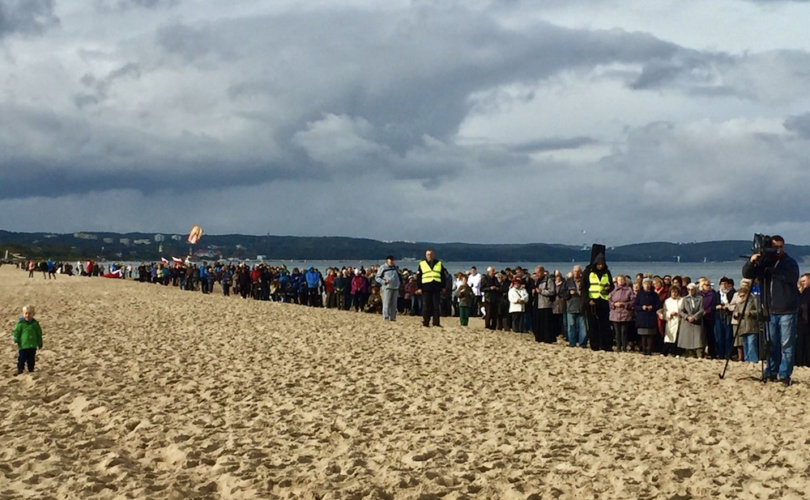 Rosary at the Borders in Poland.Facebook

SANTA PAULA, California, December 1, 2017 (LifeSiteNews) — There will be a mass rosary service throughout the United States on December 12, the feast day of Our Lady of Guadalupe, inspired “100 percent” by the Rosary on the Borders in Poland.

The “Rosary on the Coasts and Borders” is the initiative of a group of Church Militant fans who proposed — and then began planning — the event in its website comments box.

“I am in constant admiration of Poland,” Patricia Lemmon, who is one of the organizers, told LifeSiteNews. “Over and over again, (the Poles) show their allegiance to reality. Their pro-life laws and initiatives encouraging families to have children, supporting families when a Down syndrome child is expected, welcoming Christian refugees but barring (jihadist) incomers, these are a beacon of intelligence coupled with goodness in the midst of so much truly dark news out of dying secular western Europe.”

Lemmon also praised the rosary events in Italy and Ireland.

The intention of the prayers will be “to ask Our Lady to save the USA from Islamic jihad, from the denial of the Christian faith, and for an end of abortion.”

The USA Rosary on the Coasts and Borders will not literally surround the nation’s massive territory. Instead, Lemmon said, it will put up “a prayer shield by representation.”

“Here in the States we do things state by state, and we believe in representation,” she told LifeSiteNews. “So (we need as representatives) one person or group from each of the 50 States, plus D.C., plus Puerto Rico, plus Guam or other territory. By December 12, that will be all 53 of us, representing the whole USA to Our Lady of Guadalupe.”

In this way, the organizers hope to match a state or protectorate to each of the Hail Marys in a five-decade rosary.

“The New World’s Lady sailed to confront jihad in the Old World,” Lemmon said. “Is this not mind-blowing? That battle, against all odds, saved Europe from imminent invasion. … As Don Juan fought under that banner, the pope prayed the rosary.”

The anniversary of the Battle of Lepanto on October 7 is also the Feast of the Holy Rosary and the date chosen by the organizers of the Polish Rosary to the Borders.

“So the Feast of Our Lady of Guadalupe, victor of Lepanto, seems the ordained date for America to link with Poland … ” said Lemmon. “Thus we will jointly block jihad and embrace faith and life.”

Canadians, too, are invited to join in. Lemmon addressed them through LifeSiteNews, saying, “Turn to your south on December 12 and join us in throwing up to heaven a bubble of protection across these vast lands. … And when you do your own Canadian rosary, we will turn to our north … and join you in storming heaven for Canada!”

Lemmon described the lay-led event as “a Wild West Rosary.”

“We didn't wait for the U.S. bishops to do anything,” she told LifeSiteNews. “As a group, they don't seem cut from the same cloth as the great Polish bishops who are so busy (being bishops), protecting and leading their flock among real dangers (although the U.S. does have a few sterling bishops). We here in the States can springboard off of the American do-it-yourself spirit.”

Those interested in joining can register on the Disqus link here.