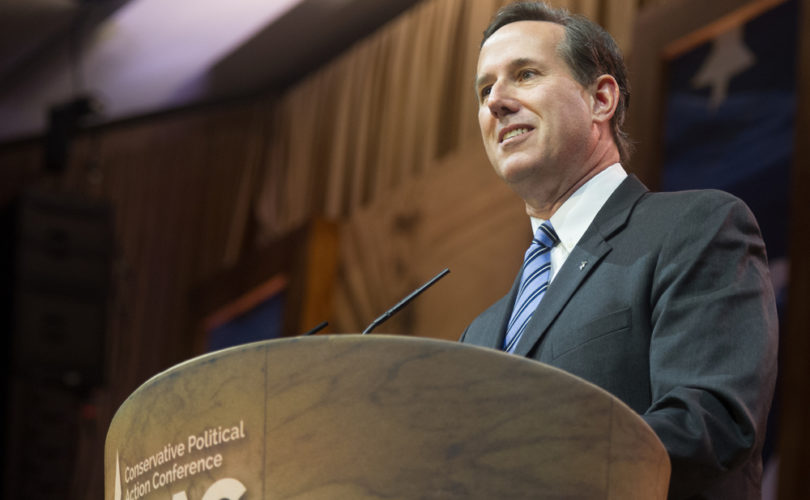 WASHINGTON, D.C., April 20, 2015 (LifeSiteNews.com) – Are you now, or were you ever, willing to attend a same-sex “wedding”? That seems to be the question lighting up the Republican presidential field, as GOP hopefuls who may one day have their finger on the nuclear button are asked the query over and over again.

So far, the Republican hopefuls' answers are yes, no, I have (sort of), and…unclear.

The media began by asking Florida's U.S. senator, Marco Rubio, if he would attend a homosexual 'wedding' ceremony, especially if he were invited by a relative or close friend.

“If there’s somebody that I love that’s in my life, I don’t necessarily have to agree with their decisions or the decisions they’ve made to continue to love them and participate in important events,” Rubio told Jorge Ramos of Fusion TV's America program.

Rubio, who became the third Republican to throw his hat in the ring last week, likened attending a same-sex “marriage” to attending the second marriage of a divorced friend. “If someone gets divorced, I’m not going to stop loving them or having them a part of our lives,” he said.

Wisconsin Gov. Scott Walker – who has not yet formally announced his candidacy yet is considered a front-runner – said that he attended a same-sex reception, but not a ceremony. “I haven’t been to a [homosexual] 'wedding,' that’s true,” he said, “even though my position on marriage is still that’s defined between a man and a woman, and I support the Constitution of the state.”

“But for someone I love, we’ve been at a reception,” he added.

A series of candidates and potential candidates have faced similar hypotheticals.

Radio talk show host Hugh Hewitt, a libertarian-leaning Republican who strongly supported Mitt Romney in previous primaries, asked two contenders “a meta-question.” Is it more important to know whether a candidate would attend a homosexual wedding or whether a president will “destroy the Islamic State before it throws hundreds of thousands of gay men to their deaths”?

Former Pennsylvania senator and 2012 presidential candidate Rick Santorum, who has said he is considering another presidential run, said it was “amazing that the Left has not risen up” against Islamic Shari'a law. “They don't focus their energy on anything except the attempt to gather more power in this country by using this issue of same-sex 'marriage' as a tool to do that.”

Then he addressed the direct question: Would he attend a gay “marriage” ceremony?

Ted Cruz, the first Republican to say he will seek the GOP's presidential nomination next year, gave a more roundabout reply.

“That's part of the 'gotcha' game that the mainstream media plays, where they come after Republicans on every front, and it's designed to caricature Republicans to make them look stupid or evil or crazy or extreme,” he said. “Sadly, most media players are not actual, objective journalists. They're active partisan players.”

He called reporters “the praetorian guard protecting the Obama administration” now gearing up to campaign for Hillary Clinton.

Cruz said he had not attended a gay “marriage” ceremony but made no commitments about the future.

“Well, I will tell you, I haven’t faced that circumstance,” he said. “I have not had a loved one have a gay wedding. You know, at the end of the day, what the media tries to twist the question of marriage into is they try to twist it into a battle of emotions and personalities. So they say, 'Gosh, any conservative must hate gays.'”

The Texas senator said that he is a conservative Christian and also “a constitutionalist.”

“What we’ve seen in recent years from the Left is the federal government and unelected federal judges imposing their own policy preferences to tear down the marriage laws of the states.”

“And so if someone is running for public office, it is perfectly legitimate to ask them their views on whether they’re willing to defend the Constitution, which leaves marriage to the states, or whether they want to impose their own extreme policy views like so many on the left are doing, like Barack Obama does, like Hillary Clinton does,” he said.