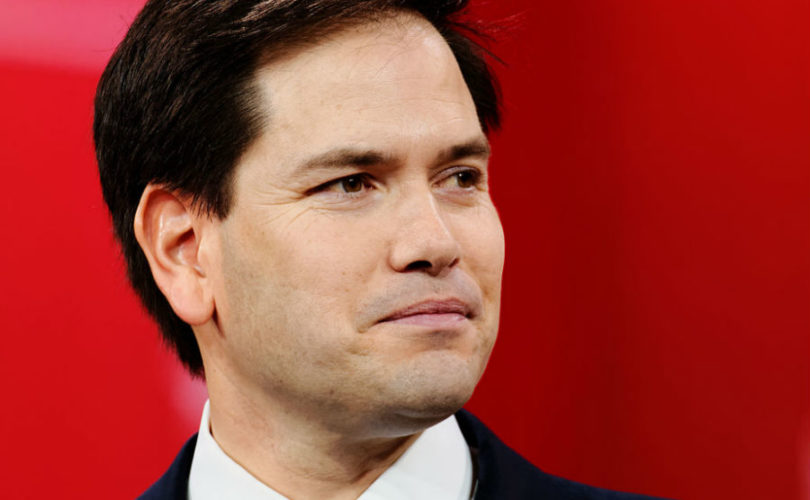 WASHINGTON, D.C., November 10, 2015 (LifeSiteNews) – Jeb Bush's well-funded super PAC may purchase up to $20 million of ads attacking Marco Rubio for being too pro-life.

Jeb's Right to Rise PAC previewed two videos for a focus group of New Hampshire voters on October 28, one of which portrayed Rubio as a pro-life extremist.

That video contains footage of Rubio from the first 2016 Republican primary debate, hosted by Fox News. When Megyn Kelly asked Rubio if he supported abortion in the cases of rape or incest, Rubio replied, “I have never said that. And I have never advocated that.”

He later clarified that, while he does not believe in exceptions, he would sign bills that contain them.

The Bush campaign ad portrays Rubio's affirmation of all life as disqualifying, making him too extreme to win a general election, three Republican insiders told the New York Times. Last week, Jeb said “of course” he believes in exceptions for rape and incest, and pledged he would have no pro-life “litmus test” for Supreme Court justices.

The Rubio campaign told LifeSiteNews that the attack would not change the senator's pro-life views.

“Marco believes that all life is worthy of protection, and is proud of his 100% pro-life record,” Brooke Sammon, a spokeswoman for Marco Rubio, told LifeSiteNews.

A second potential Bush attack ad criticizes the Florida senator, and longtime Bush friend, for skipping Senate votes to defund Planned Parenthood, which Rubio dismissed as “show votes,” as well as a vote on the president's Iran deal.

The PAC's chief strategist, Mike Murphy, pledged to spend up to $20 million on the ads, according to the Times. Murphy, who signed an amicus brief supporting same-sex “marriage,” has suggested the GOP needs to “modernize” its views. He advised John McCain and Mitt Romney's failed presidential campaigns, as well as Meg Whitman’s losing campaign for governor of California.

The Bush campaign has hauled in nearly four times as much cash as Rubio's. Altogether, Bush has raised $133.3 million to Rubio's $47.7 million.

Bush raised Rubio's Senate absences during the CNBC debate, but Rubio was widely perceived as getting the better of the exchange. His campaign has already released a video showing Jeb praising Rubio entitled, “Before the Phony Attacks.” At one point Jeb, who has been branded “low-energy,” praises Rubio's “high-voltage energy.”

The campaign acrimony has created a rupture between Bush and Rubio, who worked together in Florida government.

After leaving the governor's mansion, Jeb Bush sat on the board of Bloomberg Philanthropies, which launched a worldwide campaign to loosen abortion restrictions in pro-life countries, in partnership with Planned Parenthood Global.

That association came up at the first Republican primary debate, hosted by Fox News. Tonight, Bush and Rubio will face off in a debate hosted by its companion network, Fox Business.