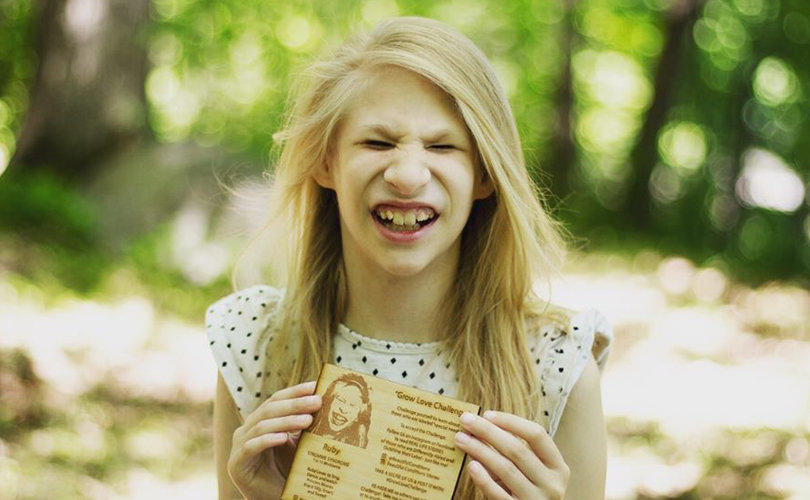 LAKEVILLE, Minnesota, June 13, 2017 (LifeSiteNews) — Ruby Ardolf is a 12-year-old with a rare genetic condition called Stromme syndrome that causes vision impairment, microcephaly, intestinal issues, slowed growth and developmental issues. There are only 12 cases in the world.

Ruby’s beginnings were rough. She was an unplanned pregnancy, her father didn’t support her mother Angie’s decision to keep her, and her first ultrasound troubled the technician.  Every new ultrasound meant more bad news. Among their many diagnoses and predictions, doctors told Angie that Ruby might never walk or talk.

Luckily for Ruby, she had a committed fan: her mother. When a doctor asked Angie if she wanted to abort Ruby, she refused. Not only did Angie want to meet her baby girl, she had lost faith in the doctors who kept changing the diagnosis. After one particularly awful appointment, Angie begged God to heal Ruby and make her life “full of love and happiness.” Amid her tears, Angie felt “peace and acceptance wash over her.” She realized that she could do nothing but trust in God and also that she could handle whatever the future brought her.

As Angie wrote on her blog, “Throughout the last 12 years, doctors have made many predictions about Ruby’s future and she has proven them all wrong.” Ruby began to walk at age 3, talk at age 4, and attend school with other children her age. She is now in sixth grade.

Ruby loves Disney movies (especially Frozen), Miracle League baseball, her dog Stella and her cat Dot. Angie, meanwhile, enjoys posting photos and films of Ruby on Instagram, so as to keep Ruby’s family, friends, and fans up to date. And this is why Ruby has suddenly become rather famous.

On May 16, Angie shared a little video of Ruby answering questions about her favorite people and things, her likes and dislikes on Instagram. To her amazement, the post went viral overnight, attracting more than 21,000 hits. “I received countless messages from people telling me that Ruby had brought them incredibly joy,” Angie wrote, “made them smile for the first time in a long time, or just letting me know that she was a blessing and a miracle! Out of all the comments, there were about 20 negative ones, which I promptly deleted.”

Angie swiftly realized that something important was happening: “Ruby was shining her bright, beautiful light into the dark corners of the world … and it was my job to spread it everywhere I could.” She contacted a CBS affiliate, and she and Ruby were interviewed the same day. They enjoyed watching themselves on television, and then came the big time: social media giant “Love What Matters,” with 6.8 million followers, asked if they could post Ruby’s video. Since then, thousands more have fallen in love with Ruby as her video jumps from webpage to webpage.

To see a video biography of Ruby focusing on how she is accepted by her community, click here.