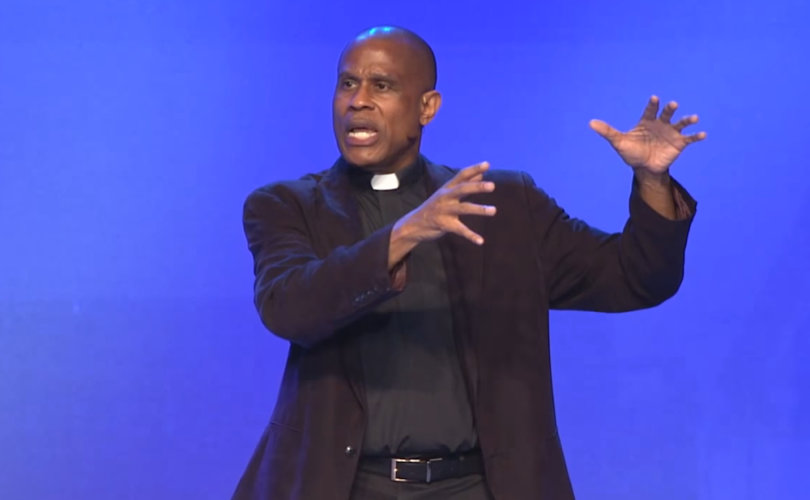 ANAHEIM, California, March 3, 2017 (LifeSiteNews) – A priest known for dissent from Catholic norms on sexuality and marriage peppered a talk last week with references that Church teaching is fluid and does not necessarily need to be followed.

“Conscience is taking a deeper, new self-understanding in our Catholic teaching,” he said. “There is a growing recognition of the limits of moral rules, that is, it’s impossible to give a rule that applies always and everywhere in every situation.”

Using the example of someone who is “in dire need of hunger and takes what they need to survive,” Father Massingale stated, “that’s not stealing.”

“And we’re also growing in appreciation of the holiness of people who attempt to navigate very complex situations in their lives,” he continued.

“We’re human,” Father Massingale said, “and so we’re not always going to be in situations where we can to do the best thing, or even the next best thing, and yet that doesn’t mean we’re not holy people.”

“As the Church continues to reflect upon that situation,” he said, “it leads us to a deeper understanding of conscience.”

Though launched under previous archbishops, the congress has continued under the leadership of Archbishop Jose Gomez, a member of Opus Dei.

He began by advising participants that he would alternate between a slide show and himself on the screen, saying in reference to the latter that thanks were due to God for “calling handsome men to be priests.”

To some laughter from the audience, Father Massingale stated, “Thank God, really. Because after all, you don’t want to be both bored and turned off when you got to Mass, OK?”

Father Massingale’s talk consistently relied upon moral relativism and repeatedly played down the Church’s “rules” and do’s and don’ts, saying while Catholics should consider the Church’s teaching, they weren’t bound by it.

“Basically we’re looking at resources for helping us to deal with a Church that’s in transition, a tradition that is in transition,” he said. “Catholicism is a living tradition and not simply a set of do’s and don’ts and moral rules.”

“Sometimes there’s a big gap between what the Catholic Church officially teaches and how people on the ground actually live,” Father Massingale continued. “Conscience becomes that way of bridging the gap between official teaching and Catholic belief and practice. Because Catholic belief by conscience is Catholic teaching.”

In 2011, Father Massingale spoke at a Capitol Hill event advancing the idea of increased support for homosexuality among Catholics, appearing alongside dissident Sister Simone Campbell on behalf of the pro-LGBT group “Equally Blessed.”

More recently, he has advocated for the Catholic Church to ally with the radical Black Lives Matter political movement, and criticized “the silence of the Church's leadership in the face of continuing injustice,” calling this “the faith community's deepest act of complicity in American racism.”

Father Massingale also accused many Catholics of racism, writing, “For too many Catholic Christians, their racism and that of their friends, neighbors, and family members is abetted by the silence of their pastors and teachers.”

He has written approvingly about Catholics who leave the Church, listing among the reasons, “their deep disagreement with the official teachings on sexual or gender issues and the alienation this causes them.”

We’re too grown up for rules

The Catholic Church is overly focused on educating children, he said at the conference, resulting too often in adults making decisions based on beliefs that haven’t “grown up” as they have.

“Pope Francis is insistent that we get the Catholic faith messed up,” the priest stated. “When we look at Christian morality as simply a set of moral do’s and don’ts, rules that begin usually with 'thou shalt not.' He said that Christian morality is much greater than that.”

Citing sacramental principle, Father Massingale also told the religious education crowd, “There is no distinction between the sacred and the profane, because the profane is infused with sacred potential and sacred reality.”

Drawing from Pope Francis, he said Catholicism is “a living tradition that grows with advances in human self-understanding,” and that this is in line with Catholic belief in the harmony between faith and reason.

To illustrate the idea of “human self-understanding,” Father Massingale mentioned the pope’s controversial quote from six months into his papacy saying Catholics had been too focused on abortion, homosexuality and birth control.

“Francis said the same thing theologians have been saying for a long time,” Father Massingale stated. “And that is, Catholicism is a loving faith it grows, and it develops and it deepens its insights as it comes into a new understanding of human life and human reality. Jesus Christ did the same yesterday, today and always, but our understanding of Jesus deepens.”

The two Synods on the Family and resulting exhortation from the pope have lead to “increased attention to the reality of conscience today,” he said.

The evolution of right and wrong

Defining conscience as an inner summons to do the known good, Father Massingale qualified that with, “Not the absolute good, but the good as honestly as I can perceive it here and now.”

He gave the example of a woman he’d counseled who was cheating on her spouse and disappointed more by letting herself down than breaking some rule, because according to the woman, “that’s not who I am.”

Addressing how catechists should develop conscience in adult believers, he stated that Pope Francis has made a major contribution “to the understanding of conscience.”

“Pope Francis has basically looked into the Church’s tradition about what we mean by discernment,” he said, “and he basically raises that to the forefront, especially as we seek to help Catholics who find themselves irregular situations,” using air quotes for “irregular situations” throughout.

He then cited Amoris Laetitia #300, which says “discernment guides the faithful to an awareness of their situation before God.”

“How do we help people to gain an awareness of who they are before God,” the priest queried. “That’s a very different way of approaching the moral life than saying, Here are the rules, obey them or not.”

Then Father Massingale cited excerpts of Amoris Laetitia #303 on conscience, “formed and guided by the responsible and serious discernment of one’s pastor … can (also) recognize with sincerity and honesty what for now is the most generous response which can be given to God …. (and discover) what God himself is asking amid the concrete complexity of one’s limits …”

He then claimed, “Conscience is not asking what’s going to be true for always and forever.”

Conscience is “communal and dialogical,” he said as well, and spoke of Pope Francis talking “over and over in his document” about “pastoral accompaniment.”

He continued that priests and those ministering in the name of the Church are responsible for “accompanying people as they journey through life and as they face very difficult ethical situations.”

“We’re not there to basically tell them what to do,” Father Massingale said, “but to walk with and to journey with people.”

Discernment is inevitably and inherently revisable, he went on, giving the example of people who would have chosen to do things different, but instead did the best they could.

“It doesn’t mean that decision was wrong,” Father Massingale said. “It just means that I’ve grown as a moral person.”

He also asserted that the Church has “very few” official statements on morality, instead using living exemplars, “by inspiration and instruction more than command.”

Father Massingale projected Amoris Laetitia #37 onto the screen, the passage stating: “We find it hard to make room for the consciences of the faithful, who very often respond as best they can to the Gospel amid their limitations, and are capable of carrying out their own discernment in complex situations. We have been called to form consciences, not to replace them.”

A picture of Pope Francis greeting a same-sex couple during his U.S. visit accompanied this Amoris Laetitia passage.

We’re all sinners, but some get a break

Carrying forth the premise of many who advance the position that individuals living in objective sin should be allowed access to Communion, Father Massingale mentioned Church teaching on marriage, yet continued, “but we also encounter people in irregular situations who are doing the best they can.”

He said as the Church “our responsibility isn’t to cast them aside but to walk with them and to respect the grace that is present even in irregular situations. Because that grace is the fruit of the same Spirit of God who blows in all of our lives imperfect as they are.”

“The Church enlightens, it teaches, it guides, it even challenges, but it does not replace or decide.”

He also pointed to the recent problematic example from Vatican Cardinal Francesco Coccopalmerio justifying access to Communion for individuals living in objective sin, which was that of a woman not able to leave her adulterous union because of what it would do to her partner and his children. The cardinal said this scenario might lead to “new sin.”

Cardinal Coccopalmerio said as well that couples in irregular unions “must be given” Communion if they “express a sincere desire to draw closer to the sacraments.”

He also said the Compendium of the Social Doctrine of the Church talks about the fact that sometimes Christians have a duty to resist in consciences what it going on in our society.

This was accompanied with several photos, one of Martin Luther King Jr., two photos with rallies, one for illegal immigration and another for transgender ideology, and the last of the recent Trump inauguration.

“President Trump was the candidate of disruption,” Bishop McElroy has said. “He was ‘the disruptor.’ Well now we must all become disruptors.”

Toward the end of his talk, Father Massingale also projected onto the screen for Conference goers a Black Lives Matter protest photo and a quote from the Star Trek television program critical about blindly following orders.