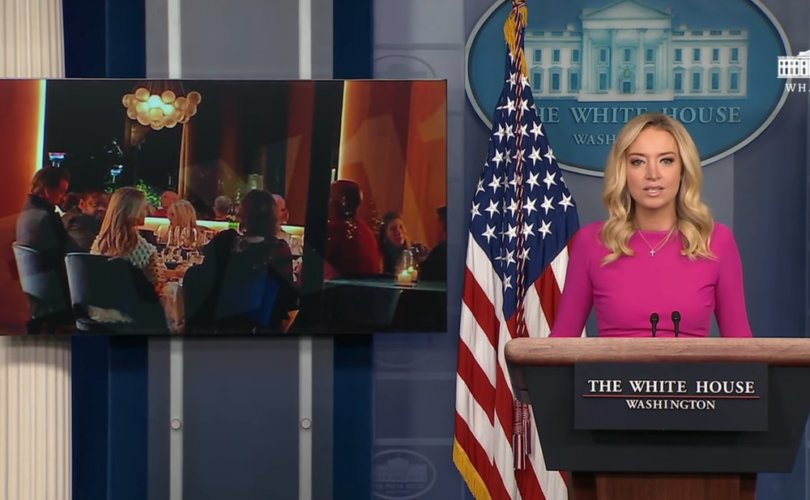 WASHINGTON D.C., December 3, 2020 (LifeSiteNews) – White House Press Secretary Kayleigh McEnany strongly criticized Democrat politicians who “impose draconian restrictions against their citizens” in the name of stemming the spread of COVID-19 while ignoring the restrictions themselves.

A video loop played in the background during the White House Press Briefing yesterday afternoon that showed, according to McEnany, “Democrat hypocrisy” when it comes to mask mandates and lockdown orders.

Stated McEnany about the video loop:

They show Governor Gavin Newsom of California dining both mask-less and indoors at the fancy French Laundry restaurant despite severe lockdown restrictions against indoor dining for the very people he governs.

You will see Speaker Nancy Pelosi indoors at a hair salon in San Francisco when salons in California were only open for outdoor services.

And you will see CNN’s Chris Cuomo staging his emergence from quarantine in a made-for-television moment, coming out of the basement. And this was after Cuomo was spotted breaking his brother, Governor Cuomo’s quarantine rules to go for a bike ride in the Hamptons.

Also notable is San Francisco Mayor London Breed, who followed Governor Newsom’s lead in dining at the French Laundry with a group of eight people.

“Quite clearly, these Democrats do not follow their own edicts. They act in a way that their own citizens are barred from acting,” pointed out McEnany.

McEnany said that the United States Constitution “matters even during a pandemic” and praised last week’s Supreme Court decision that ruled against New York Governor Andrew Cuomo’s restrictions on places of worship, blocking the Governor from enforcing the limits against religious buildings and places of worship.

“Governor Cuomo’s decision to impose restrictions on the size of religious gatherings was rebuked by the highest court in the land. But what was Cuomo’s response? Instead of showing deference to the Constitution, he attacked the legitimacy of the Court. Governor Cuomo said this: ‘You have a different Court, and I think that was the statement that the court was making. We know who he appointed to the court. We know their ideology,’” said McEnany.

“Well, in fact, the ideology of those on the Supreme Court who made the decision to support the First Amendment are in favor of freedom, the Constitution that survives even during a pandemic,” she continued.

“This statement from Governor Cuomo strikes at the heart of the issue: Democrats seek control. These images behind me make clear Democrats’ mindset: rules for thee but not for me,” she added, referring to the video loop playing on the screens.

McEnany told Americans that President Trump “stands with you, your freedom, your ability to decide how to best protect your health.”

“As one federal court put it, ‘There is no pandemic exception to the Constitution,’ she concluded.

Later during the press briefing, McEnany defended the President’s decision to host about a dozen Christmas gatherings in the coming days, in spite of Coronavirus fears that are gripping the nation.

A reporter asked if the White House is “setting a good example for the public” in hosting “holiday parties” at a time when the “CDC and other organizations are asking Americans to forgo those kinds of celebrations for their own safety.”

McEnany replied that if people in America have been allowed to “loot businesses, burn down buildings, engage in protest, you can also go to a Christmas party, you can celebrate the holiday of Christmas, and you can do it responsibly.”

McEnany was likely referring to the Black Lives Matter mobs this summer who, backed by various Democrat governors in certain states, were allowed to engage in violent destructive protests with nobody wearing masks or socially distancing.

The White House press secretary said that Christmas gatherings hosted in the East Wing this year will have various protocols in place because of Coronavirus. There will be smaller guest lists, masks will be made available to attendees, social distancing will be encouraged, and hand sanitizing stations will be present.

“But we will engage in the celebration of Christmas,” McEnany said.