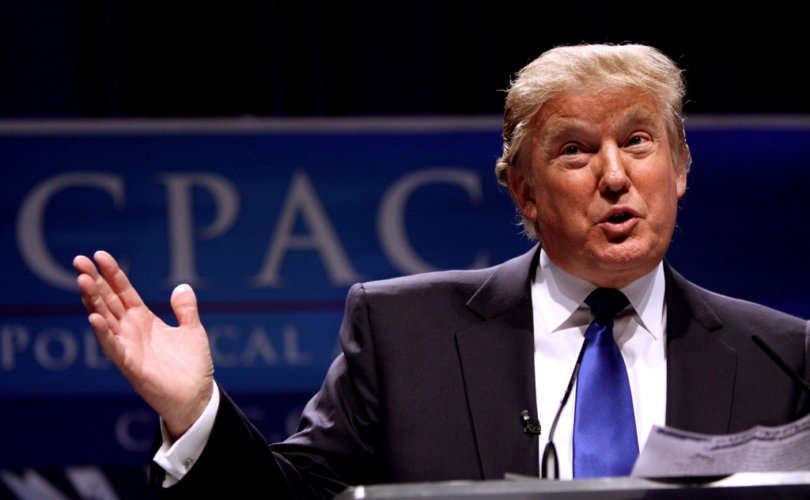 WASHINGTON, D.C., April 1, 2016 (LifeSiteNews) – Donald Trump's comments that women who have abortions should be punished by law were “hugely damaging” to him, or any Republican who hopes to win the election in November, Rush Limbaugh said on Thursday.

Before Trump told Chris Matthews during a “Hardball” townhall interview that mothers should suffer “some form of punishment” for their role in procuring an abortion, Limbaugh said the Democrats had floundered, unable to work up any excitement for their own candidates.

“They were moribund. They are falling asleep. They were depressed. Their turnout is nothing,” he said. “Now they’re energized. “

The Trump campaign rushed out a clarification statement that the candidate believes only that abortionists should be punished. And campaign spokeswoman Katrina Pierson chalked the statement up to a moment of “misspeak.”

But according to Rush, the damage was done.

“Here comes this War on Women thing, and it needn’t have happened,” he said.

In the last presidential election, a series of Democratic candidates won by magnifying – many in the pro-life movement said they were twisting – statements that pro-life candidates made about abortion.

In 2012, the U.S. Senate candidate from Missouri, Todd Akin, referred to “legitimate rape,” and his counterpart in Indiana, Richard Mourdock, said that when a child is conceived by rape, it “is something God intended to happen.”

Mourdock said he meant that God intended a new life to bring solace to the mother but his opponent, now-Sen. Joe Donnelly, claimed Mourdock meant that God foreordained the rape.

In the presidential election, a woman dressed as an oversized pack of birth control pills stalked Mitt Romney on the campaign trail.

A year later, Planned Parenthood spent more than $1 million in negative ads against Ken Cuccinelli, a pro-life conservative who ran for governor of Virginia, many focused on his position on abortion.

But by 2014, the approach had worn thin. When Colorado Sen. Mark Udall tried to center his campaign as a referendum on Republican Cory Gardner's views of reproduction, voters dubbed him “Mark Uterus” – and polls showed many women had rejected the “War on Women” theme.

Bill Curry, a former aide to President Bill Clinton, said all the excessive rhetoric served to accomplish was to “make women feel manipulated by a man.”

Now, with one interview, the war rhetoric is back, Rush said.

Hillary Clinton said that all Republicans secretly want to prosecute mothers who have abortions. “Maybe they aren’t quite as open about it as Donald Trump was earlier today, but they all have the same position,” she said Wednesday night.

The 2016 election “is about whether abortion is legal,” she added.

Feminists have piled on, with Planned Parenthood CEO telling Matthews on Thursday that Trump's remarks reflected the Republican Party platform.

Hundreds of women gathered outside the Trump International Hotel in Manhattan to protest the comments, hoisting signs and chanting feminist mantras.

Drawing on Mr. Trump's famous line from “The Apprentice,” Jean Bucaria, vice president of the National Organization for Women New York, said, “If women could fire him right now, we would.” And Rep. Carolyn Maloney, D-NY, said Trump's views came “straight out of the Middle Ages.”

A series of polls have shown that between 67 and 74 percent of female voters have a negative impression of Mr. Trump.

Limbaugh said the feminists are ready to roll out the next phase in the war between the sexes, but he is worried that listeners might not “recognize it, because you’re so opposed to Trump.”

He said he spoke up out of obligation to his fellow conservatives in any campaign.

“What I’m trying to do is limit the damage it’s done to us and to prevent the Democrats getting a big score out of it,” he said. “My whole point here is to defeat Democrats, defeat liberalism. That’s the destructive force.”