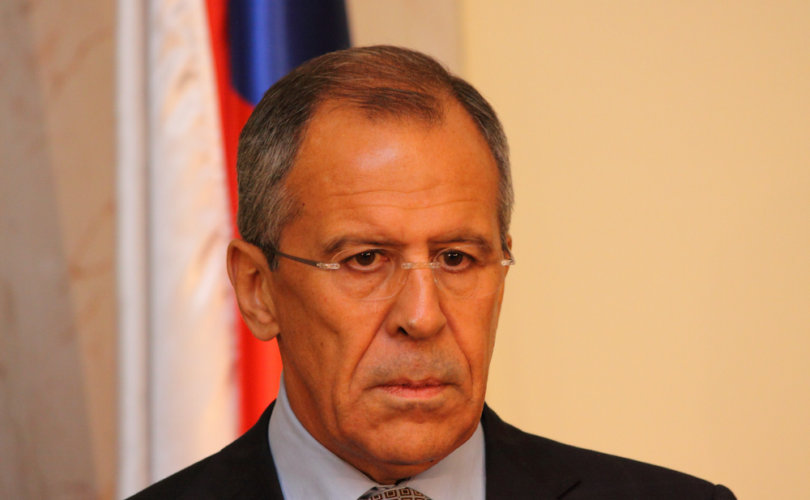 “The risks are really considerable … the danger is serious, real, and we must not underestimate it,” Russian foreign minister Sergei Lavrov said Monday on Russian television.

Lavrov’s comment came in response to a question about a potential third world war and whether the current situation between Russia and Ukraine was comparable to the 1962 Cuban missile crisis.

The interview was aired just a few hours after a meeting between U.S. Secretary of State Antony Blinken, Defense Secretary Lloyd Austin, and Ukrainian President Volodymyr Zelenskyy in Kyiv.

During the meeting, Austin promised more military assistance to Ukraine and said he wanted to “see Russia weakened to the degree that it can’t do the kinds of things that it has done in invading Ukraine.”

The following day, Austin welcomed officials from than 40 countries to Ramstein Air Base in Germany, saying that “nations from around the world stand united in our resolve to support Ukraine in its fight against Russia’s imperial aggression.”

“Ukraine clearly believes that it can win, and so does everyone here,” he added.

Russia has accused NATO of risking nuclear war by engaging in a “proxy war” with Moscow and supplying Ukraine with weapons.

“These weapons will be a legitimate target for Russia’s military acting within the context of the special operation,” Lavrov said.

After warning of the risk of a nuclear war, Lavrov insisted that Russia is doing everything in its power to avoid it.

“This is our key position on which we base everything,” he said, adding that he “would not want to elevate those risks artificially, [though] many would like that.”

This is the second time that the Russian foreign minister has warned of a third world war.

In March, his comment that such a war would be “nuclear and destructive” had already made headlines.

Moscow is calling the war in Ukraine a “special military operation” and says its aim is to defend the Russian minority in Ukraine and rid the country of neo-Nazi politicians. Kyiv and the West see this as a pretext for unjustified aggression and invasion of a sovereign country.