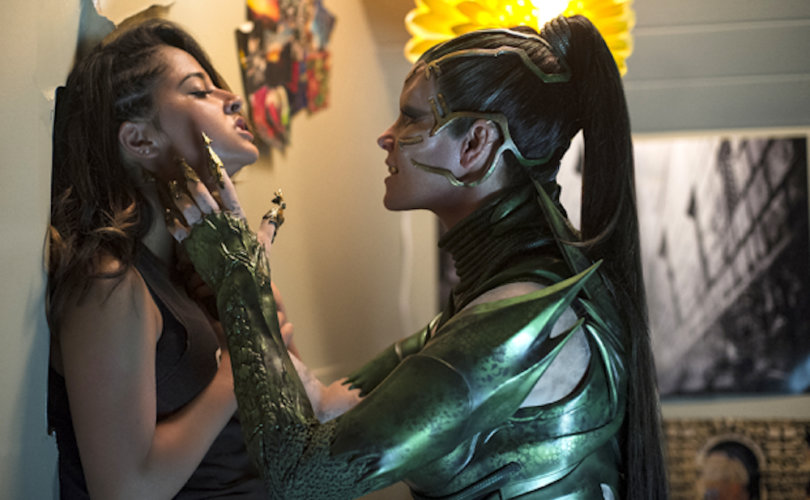 March 27, 2017 (LifeSiteNews) — Russia has slapped an “18+” adults-only rating on the new Power Rangers movie after widespread Western media reports that it includes a female character questioning her sexuality. The film is rated PG-13 in the U.S.

Notably, Russia reportedly has not given a similar adult rating to Disney’s remake of Beauty and the Beast, despite its alteration of the original animated film to make one of its characters (Le Fou) homosexual, in what the director called an “exclusively gay moment.”

“On Friday, WDSSPR, the Russian distributor of Power Rangers, informed theaters that the age restriction for the movie has been changed from 16+ to 18+, meaning that only viewers over 18 will be admitted to the screenings.

“The distributor provided no explanation for assigning the stricter age restriction, but it followed harsh criticism from several [Russian] legislators over the movie's LGBTQ content.”

“Some officials [at the Culture Ministry] don't want to observe laws adopted by the State Duma [lower chamber of Russian Parliament], specifically the law banning gay propaganda among minors,” he told Tsargrad, according to Hollywood Reporter.

Russia has been excoriated by Western homosexual activists and social “progressives” for its actions against LGBTQ activism, especially toward youth. In 2013, the Russian Federation enacted a law, passed by the Duma, banning “propaganda of non-traditional sexual relationships” among minors. The stated purpose of the law was, “Protecting Children from Information Advocating for a Denial of Traditional Family Values.”

As Russian president Vladimir Putin said in a 2014 interview, the purpose of the Russian law is to prevent the indoctrination of Russian youth.

“I believe we should leave kids in peace,” Putin argued. “We should give them a chance to grow, help them to realize who they are and decide for themselves.” Even the liberal-leaning Wikipedia reports that there are “thriving LGBT communities” in Moscow and St. Petersburg.

While Twitter and pro-LGBTQ sites lit up with liberal condemnations of the Russian Power Rangers rating, American pro-family advocates who believe pro-homosexual and pro-transgender entertainment themes corrupt youth sympathized with the 18+ rating.

“I agree wholeheartedly with the adult rating,” Ryan Sorba, chairman of Young Conservatives of California, told LifeSiteNews. “Children don’t need to be involved in discussions of aberrant sexual behavior and gender confusion.”

“These are typical Hollywood leftists promoting cultural Marxism in an attempt to destroy the institution of the family, where self-reliance is learned,” Sorba said.

“Well, at least Russia is trying to prevent more children from being corrupted,” Harvey said in an interview with LifeSiteNews. “When is America going to grasp that homosexual expression is rising among our kids, which is not a positive trend?”

Harvey pointed to data from a recent Centers for Disease Control and Prevention (CDC) study showing an increase in the percentage of teenagers claiming to be homosexual.

“Unless we don’t care about high-risk behavior and we have given up on long-term health for our children, it’s time to put the brakes on the constant promotion of this lifestyle, as if it’s inborn like race. We know that it is not,” she said.

Plugged In, the movie-reviewing publication of Focus on the Family, described the Power Rangers exploration of alternative sexuality (played by actor Becky G) as follows: “While talking about her own sense of being an outsider, [Yellow Ranger] Trini's conversation with another team member implies that she may be gay, or perhaps questioning her gender identification.”

“For Trini, really she's questioning a lot about who she is,” Power Rangers director Dean Israelite explained to Hollywood Reporter. “She hasn't fully figured it out yet. I think what's great about that scene and what that scene propels for the rest of the movie is, 'That's OK.' The movie is saying, 'That's OK,' and all of the kids have to own who they are and find their tribe.”

A Wired magazine review of the movie said the non-traditional sexual identity moment was a big development for LGBT visibility, “albeit in a very small way,” and describes the scene as follows:

“Despite the headlines, Power Rangers skips any dramatic ‘yep, I’m gay’ admission, and instead opts for nonchalance. During a bit of squad bonding, Yellow Ranger Trini (Becky G) reveals that she doesn’t want her strait-laced family involved in her relationships. ‘Boyfriend problems?’ Zack (Ludi Lin) inquires. She demurs. ‘Girlfriend problems?’ he asks. She doesn’t respond fully, but does say she’s never talked about her identity with anyone. The moment is short, but genuine; she’s a teen, after all, and she’s still Figuring Stuff Out.“

Reviewer Angela Watercutter echoes Sarah Kate Ellis of the LGBTQ media pressure group GLAAD in saying that “moving beyond casual inclusion” for homosexual, bisexual and transgender characters “should be Hollywood’s next step.”

American social conservatives have generally been sympathetic to the Russian law, or at least the motivation behind it, even as they criticized the Russian Federation and Putin, for serious human rights violations. (Under former President Obama, restricting LGBTQ activism in any way constituted a “human rights” violation while the United States promoted LGBT policies, including homosexual “marriage,” in the name of human rights. It is as yet unclear whether President Trump will continue those policies.)