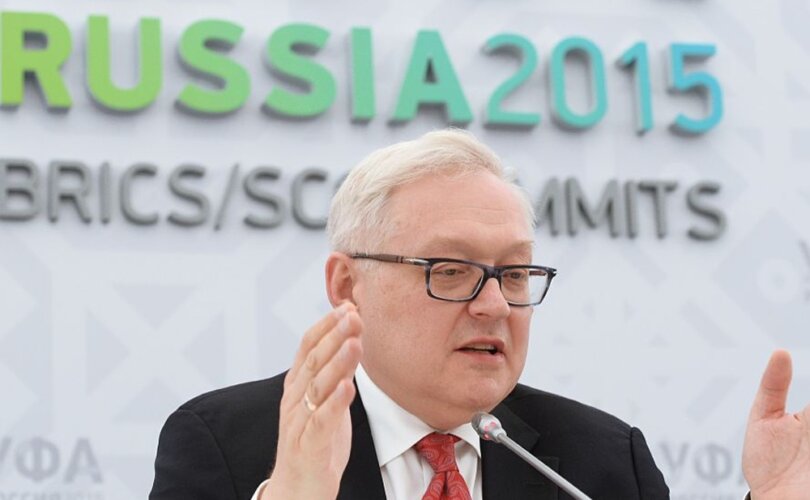 (LifeSiteNews) — Russia postponed a series of nuclear weapons talks that had been scheduled to take place with Biden administration officials this week in Cairo, Egypt.

Russian Deputy Foreign Minister Sergei Ryabkov told reporters in Moscow on Tuesday that Russia unilaterally opted to delay the meetings due to major disagreements with the U.S. regarding the ongoing conflict in Ukraine, the AP reported.

Russia has postponed a round of nuclear arms control talks with the United States because of stark differences in approach and tensions over Ukraine, a senior Russian diplomat said Tuesday. https://t.co/vq49V7NqWB

“We faced a situation when our U.S. colleagues not just demonstrated their reluctance to listen to our signals and reckon with our priorities, but also acted in the opposite way,” Ryabkov said.

Ryabkov’s comments come after the U.S. State Department said Monday that the decision to temporarily call off the discussions came solely from Russia without U.S. input.

“The Russian side informed the United States that Russia has unilaterally postponed the meeting and stated that it would propose new dates,” a spokesperson said.

The State Department said it’s “ready to reschedule at the earliest possible date as resuming inspections is a priority for sustaining the treaty as an instrument of stability.”

The now-delayed meetings were slated to address the New START Treaty (Strategic Arms Reduction) after recent escalations in the Ukrainian conflict leading to heightened risk of nuclear engagement.

CNN noted that the START treaty is “the only agreement left regulating the world’s two largest nuclear arsenals.” According to the AP, the initial plan to hold the high-profile discussions had been “intended to show that Russia and the U.S. remain committed to arms control and keeping lines of communication open despite soaring tensions over Ukraine.”

It’s unclear when the talks will be rescheduled.

The prospect of nuclear war has grown after the Russian invasion of Ukraine earlier this year that conservatives argue was at least partially encouraged by the Biden administration’s policy blunders, LifeSiteNews has reported.

As Daily Wire commentator Michael Knowles has pointed out, Ukrainian President Volodomyr Zalenskyy previously warned that the Nord Stream 2 pipeline, which was sanctioned by former U.S. President Donald Trump but greenlit by Biden, was a “dangerous geopolitical weapon of the Kremlin” that would “only play into the hands of the Russian Federation.”

After the pipeline was blown up via multiple undersea detonations in late September, Russia pointed the finger at the U.K. Navy, accusing it of sabotage. London has denied the allegations.

Since the beginning of the conflict between Russia and Ukraine, the Biden administration has funneled billions of taxpayer dollars in military aid to Ukraine and promised decisive action in the event that Russia employs tactical nuclear weapons.