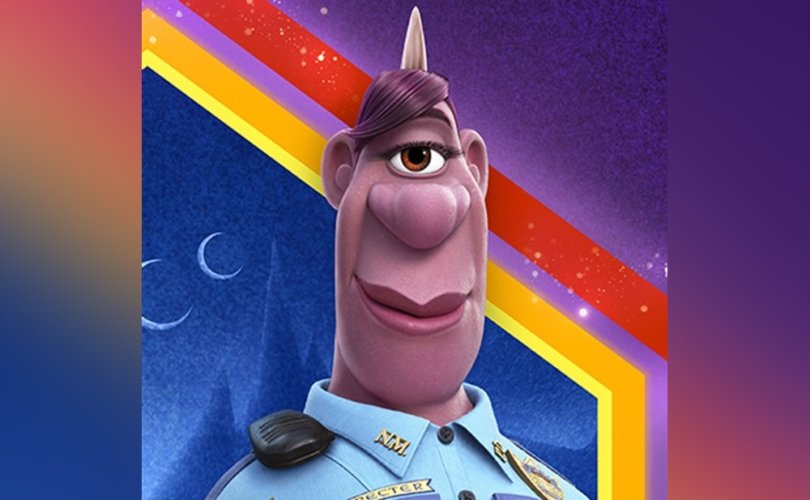 'Onward' will feature a purple police officer cyclops, voiced by actress Lena Waithe, who talks about her 'girlfriend.'

MOSCOW, Russia, March 6, 2020 (LifeSiteNews) ― The LGBT identity of a controversial character in Disney’s new film Onward has been removed for Russian audiences.

According to Russian online film magazine Kinopoisk.ru (i.e. “Cinesearch”), “Disney and Pixar have presented (in their film) a new LGBT-character, an officer of local police, a cyclops named Specter. Her orientation is mentioned in a short line of dialogue in the scene where she stops two main protagonists, brothers Ian and Barley, for traffic violations.”

“With the help of magic, they disguise themselves as the centaur Bronco, who is Specter’s police buddy and their mother’s boyfriend, with whom she (Specter) discusses her relationship with her girlfriend and daughter,” the article continues.

“According to the reports of the viewers who have already watched the cartoon, in the Russian dubbed version, the more neutral word ‘partner’ appeared here, not specifying the sex of the character being discussed.”

Cinesearch suggested that this was how Disney’s Russian office managed to avoid problems with its distribution in the relatively socially conservative country. It reported that it contacted Russian Disney to confirm, but a spokesperson declined to answer.

Onward, which has just been released in the United States, is Disney’s first animated movie with an openly homosexual character. Officer Specter was voiced by Lena Waithe, who identifies with her same-sex attraction. LifeSiteNews and other pro-family advocates have called on parents to boycott the film, and LifeSiteNews’ petition has received more than 53,000 signatures since it was posted.

Disney is the parent company of Marvel Studios, which is in the middle of producing a movie starring an “LGBT superhero.” It tested the waters by introducing a minor LGBT character in its last blockbusting superhero film, Avengers: Endgame.

According to Cinesearch, this was also altered in the Russian version. In the original version, the reference to the LGBT character, played by director Joe Russo, going on a same-sex “date” was changed to one about a “dinner, causing no questions,” Cinesearch wrote.

There are laws in Russian forbidding the dissemination of LGBT propaganda to children and teenagers. However, LGBT references and scenes have also been removed from American films for adults before they opened in Russia. Last year, the Russian distributor for the Elton John biopic Rocketman cut a “gay male sex” scene along with a caption near the end of the movie about the singers raising children with his same-sex partner.

The UK’s Guardian reported that the distributor had edited the film to comply with “local laws.” However, Russian lawyer Ilya Kotlyar told LifeSiteNews via social media that even though the 18+ age restriction already limited the movie to adults, the homosexual sex scenes were likely cut to give the distributors “the opportunity to widen the potential audience.” Kotlyar added that the average Russian is just not that interested in seeing homosexual sex onscreen.

Russian distributors change American films in other ways to reflect Russian tastes. Cinesearch reported that the nationality of the villain of The Secret Life of Pets 2 was changed in the Russian version. The original film depicted a cruel circus director named Sergei, who spoke with a heavy Eastern European accent. In the Russian version, the villain is named Serge, and he speaks Russian with a French accent. Cinesearch also described how references to Soviet dictator Joseph Stain were removed from the 2019 Hellboy movie.