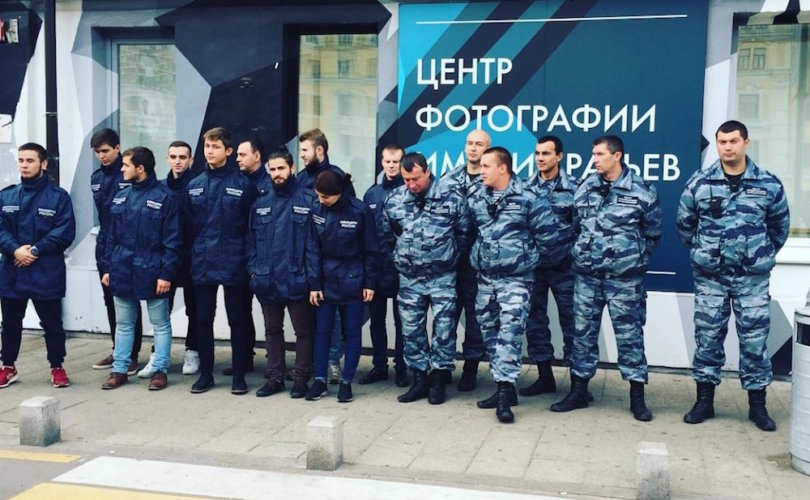 The officers blocked Lumiere Brothers Center for Photography on Sunday, explaining they were evaluating the photographs to determine whether they were child pornography.

Sturges' exhibit, titled “Absence of Shame,” became embroiled in public controversy when bloggers criticized his display by exposing some of Sturges' nude and semi-nude pictures of teens, adolescents, and children — some reportedly as young as three.

Metropolitan Jonah of The Russian Church Outside Russia told LifeSiteNews, “There are limits of decency, and this exhibit undoubtedly exceeded them. We have to condemn any kind of victimization of children, especially for use in pornography. Victimization of adults in pornography is bad enough.”

While Russian officers acted swiftly, U.S. leaders have repeatedly tried to close down Sturges' exhibits. The FBI raided Sturges' studio in San Francisco more than 20 years ago but pressed no charges against him. Both Alabama and Tennessee sought through court action to legally classify Sturges' book as “Child Pornography” in 1998, to no avail.

Sturges, 69, said he was “sad” after hearing his photo exhibit was closed. He said Russia was the first country to close his show.

His Beatitude Jonah noted, “It was not the Russian government that shut it down but rather Russian NGOs, non-governmental organizations.”

In the past year, Putin has cracked down on U.S. NGOs, pressuring them to stop working in Russia by passing laws that any foreign-funded NGO that engages in political activity must register as a “foreign agent,” and could be shut down without a court order.

The National Endowment for Democracy, based in Washington D.C., and funded by the U.S. Congress, was banned by Russia in July 2015 as an “undesirable” international organization, accusing the organization of “political actions intended to influence decisions made by the authorities.”

“As to the shutdown of foreign, that is, U.S. NGOs, these were proving to be agents of U.S. policy to undermine the Russian government and society, and to promote alien and unwelcome values and actions, such as abortion on demand, gay marriage and other such issues, not to mention political subversion,” Metropolitan Jonah explained.

Indeed, Consortium News reported at the time that the National Endowment for Democracy (NED) had a “quasi-CIA role” in Russia, including “plans for regime change in Moscow.”

Furthermore, the pro-homosexual Human Rights Watch acknowledges that part of Putin's intent is to “silence critical voices … on the rights of lesbian, gay, bisexual and transgender (LGBT) people.”

“Putin's denunciation of the U.S. withdrawal from the ABM treaty as a war threat, the shutdown of the NED is another loud and clear warning that Russia is aware that it is facing an existential war threat, brought on by the Obama administration-run coup in Ukraine and declared intent to place NATO weapons on its border,” political activist Lyndon LaRouche summarized.