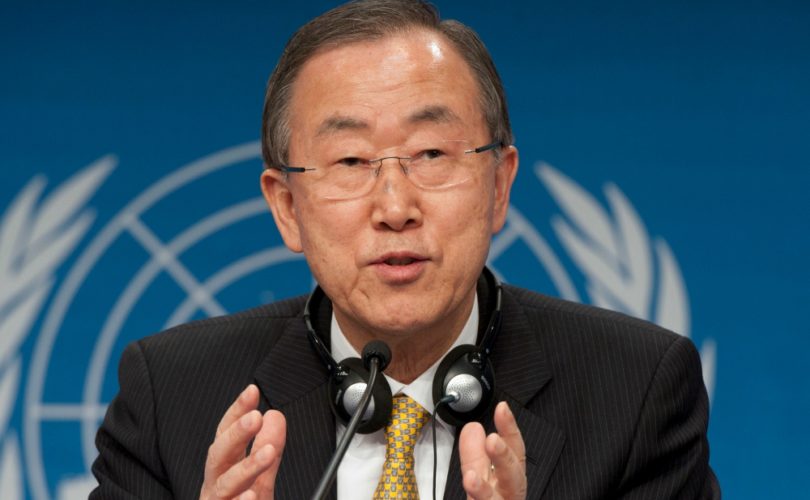 U.N. Secretary General Ban Ki-moon, 72, was the guest of honor at a gathering of the 15-member United Nations Security Council (UNSC) last Wednesday. In thanking him for his decade of service, the UNSC planned a tribute that included honorable recognition for his work to normalize homosexuality around the world.

The 72-year-old Ki-moon used his post to promote global acceptance of lesbian, homosexual, bisexual and transgender “rights,” from the presumption that homosexual activity is normal and healthy. He hosted the first major meeting at the U.N. for LGBTQ people to increase acceptance of the gay lifestyle.

In 2014, he issued an executive order forcing the U.N.’s worldwide conglomerate to recognize as legitimate and bestow benefits upon all same-sex “marriages” for anyone under U.N. employ. (Russia, Saudi Arabia, China, Iran, India, Egypt, Pakistan, Syria and 36 other nations unsuccessfully opposed Ki-moon's executive fiat.)

Most of the UNSC, including the United States, wanted the following statement read at Wednesday’s meeting in honor of Ki-moon: “It is thanks to you, Mr. Secretary General, that women, young people, and the LGBT community have been heard and assisted, and today their voices sound louder and stronger in this headquarters and around the world.”

That's where Russia stepped in. Diplomats say the Russians, who are increasingly championing Biblical morality, refused to go along with praise for the promotion of homosexuality.

After Russia objected, a compromise was reached, and Ki-moon's work was praised as resulting in “the most vulnerable or marginalized have been increasingly heard and assisted by the United Nations.”

The promotion of homosexuality as natural and positive has created heated debates in the U.N., particularly from Christian African countries and Islamic nations. Communist China also regularly objected, as well as Orthodox Christian Russia.

Sodomy is still a crime in at least 73 countries, according to the U.N., which reports the statistic as a negative sign of prejudice. Medical science has proved sodomy to be physically harmful and the leading cause of the spread of AIDS. Many religions, including Christianity, also believe it is spiritually and psychologically harmful.

Under Ki-moon, the U.N. issued six new stamps promoting homosexuality. The African Group, composed of 54 nations, the multi-national Muslim conglomerate “Organization of Islamic Cooperation,” and the Group of Friends of the Family, which includes 25 nations, protested the stamps to no avail.

Ki-moon, a South Korean, steps down December 31.  Antonio Guterres of Portugal will take his place as U.N. Secretary General.

At last Wednesday's ceremony, Ki-moon said that upon leaving his position his “deepest regret … is the continuing nightmare in Syria.” He urged the UNSC to unite, as Patriarch Kirill of Moscow has advised, and militarily protect civilians in Aleppo, Syria, who have yet again been bombarded in one of the fiercest battles of the five-year ISIS advance.