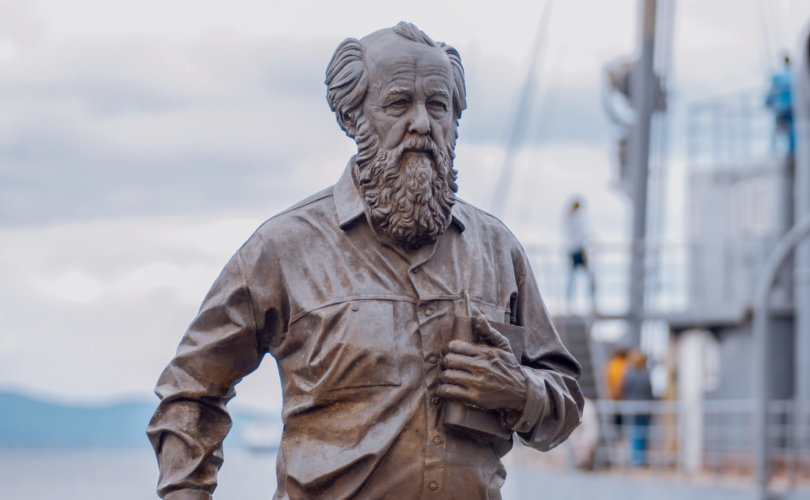 February 13, 2020 (LifeSiteNews) — If Aleksandr Solzhenitsyn were alive today, he might be tempted to look at the increasingly secular, morally bankrupt West and say, “I told you so!”

Joseph Pearce is an English-born author who runs the Center for Faith & Culture at Aquinas College in Nashville, Tennessee. He told Canadian pro-life activist Jonathon Van Maren that he believes that Solzhenitsyn (1918–2008) not only accurately predicted what would happen to the West, but is someone we should look to for inspiration in dealing with those who want to drag us back to socialism.

“All of us are living, you know, let’s face it, in a world that’s in crisis in so many ways,” Pearce observed. “Solzhenitsyn’s example, real-life example, is incredibly encouraging[.] … [H]e decided that he would single handedly take on the monster [of communism].”

Solzhenitsyn’s life, Pearce continued, is an example of one man “with courage and using his God-given gift” to “actually overthrow the dragon. And that’s the encouraging lesson I think we get from … his way of life.”

Solzhenitsyn is perhaps best known for writing The Gulag Archipelago, a nonfiction book he compiled during the 1950s and 1960s. It focuses on the time he and others spent in the Soviet prison system. Historians believe that his writings played an influential role in bringing down communism in the 20th century.

Pearce is one of the few Western journalists to have ever interviewed Solzhenitsyn. He says he was surprised to learn that Solzhenitsyn was an admirer of G.K. Chesterton and that when he met him at his home, he was struck by his humor. Pearce’s book, Solzhenitsyn: A Soul in Exile, based on the time he spent with him, was published in 1999.

Pearce shared with Van Maren an anecdote about a time when Solzhenitsyn was visiting Italy after being exiled from the Soviet Union. After seeing pro-communist graffiti, Solzhenitsyn thought, “A dose of the real thing would do them good … these people do not understand the fire that they're playing with!”

Pearce said that those who want socialism today are “ignorant of the past” and “know nothing about history.” There have been “tens of millions of people killed by” Marxism.

Pearce said opponents of socialism and Marxism need to stand up and, like Solzhenitsyn, defend truth.

“We have to embrace martyrdom if that is what’s necessary. Solzhenitsyn was willing to die in order to fight!”