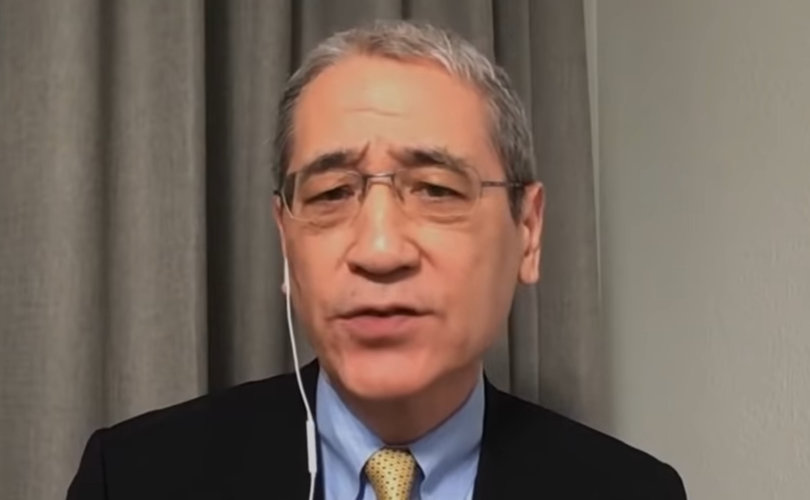 “China and Russia are on the same page,” Chang told Epoch TV on a February 25 episode of “Crossroads.” Host Joshua Philipp asked Chang about the real “possibility of World War III.”

Chang said President Joe Biden has botched the situation by not applying sanctions early enough — he said the president should have done it before Vladimir Putin invaded Ukraine.

“What you say to Putin is, ‘I’ll take the sanctions off if you withdraw your forces from the Ukraine border. If you stop threatening another country.’ But Biden didn’t do that,” Chang said.

This has led to a conflict that will extend to at least Eastern Europe, Chang predicted. “We’re talking about the unthinkable.”

China is “interfering in NATO,” Chang warned. “Beijing has been talking a lot about NATO expansion, and they’re doing that because they’re trying to help Vladimir Putin.”

He said Russia and China have a “no limits partnership” which includes economic and military cooperation.

Philipp, the Epoch TV host, asked Chang where the world is heading to conclude the interview. “I think we are heading to a global conflict, because Biden is not willing to exercise American power … and right now I think we are probably at a point where we are too late to stop general conflict around the world.”

“We cannot rule out the worst scenarios,” Chang said.

He made similar comments to Fox News and said sanctions need to be placed on the Chinese Communist Party.

“China has made it very clear that they are financing the war against Ukraine. And the United States warned China not to do this on February 3,” Chang told Laura Ingraham on February 24. “They did it anyway in Beijing. And so I think the United States needs to impose those hard sanctions not just on the Russians but also the Chinese.”

Ingraham asked Chang why “so many elites [are] so willing to give China the benefit of the doubt and billions in U.S. dollars to build up its military while being singularly focused on the Russian threat.”

“First of all, a number of people in the elite do have economic interests,” Chang said. “And they view their interests, meaning they’re closer to the Communist Party in China than they are to their fellow Americans.”

He criticized five decades of American foreign policy of “accommodation” to the Chinese Communist Party. Proponents of the policy, which began under President Richard Nixon in 1972, argue that working with China on economic interests is the best way to maintain peace and stop military aggression.

“This is five decades of ideology that has failed. And clearly, this is absurd, because we’ve seen by now that there’s no chance, there’s no chance that Xi Jinping is going to come help us,” Chang said. “But he will help Putin. He’s already helped Putin.”