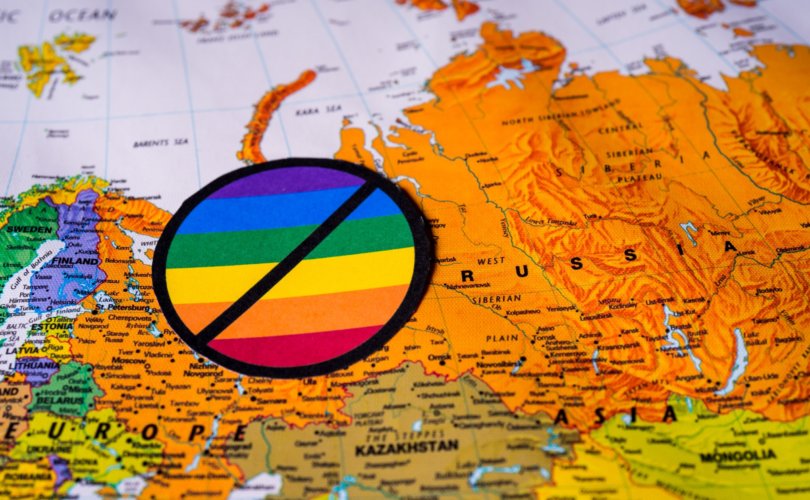 MOSCOW (LifeSiteNews) — Lawmakers introduced a new law into Russia’s State Duma on Tuesday that would impose fines on people and organizations that promote non-traditional sexual relations.

According to Russia Today, the bill explains that “family, motherhood and childhood in their traditional understanding, which comes from our ancestors, are the values that ensure the continuous change of generations, act as a condition for the preservation and development of a multinational people, and therefore need special state protections.”

The bill also details that while the state has a duty to protect minority groups, “at the same time, the threats arising from the imposition of foreign standards that break the generally accepted way of life in the field of family and marriage begs the question about a need to protect the culture of the majority, including by introducing additional legal regulation.”

The drafters of the legislation clarified that the law would not target public discussions on the topic or prohibit people from holding non-traditional values.

The amount one could be fined depends on the medium used to share the material and the nature of the entity promoting the material, with harsher penalties being applied to those who use mass media, the internet, or who are in a position of authority within the country.

In general, individual citizens who transgress the law would be fined $660 to $8,300, whereas officials and legal entities could face much harsher fines of up to $160,000.

This is not the first time Russia has used government to curb the spread of LGBT ideology within the nation.

In 2013, Russia passed a law called “for the Purpose of Protecting Children from Information Advocating for a Denial of Traditional Family Values,” which made it a criminal offence to promote LGBT ideology to children.

Much like the new bill, the idea behind the 2013 law was to protect traditional Russian values from being taken over by western liberalism.