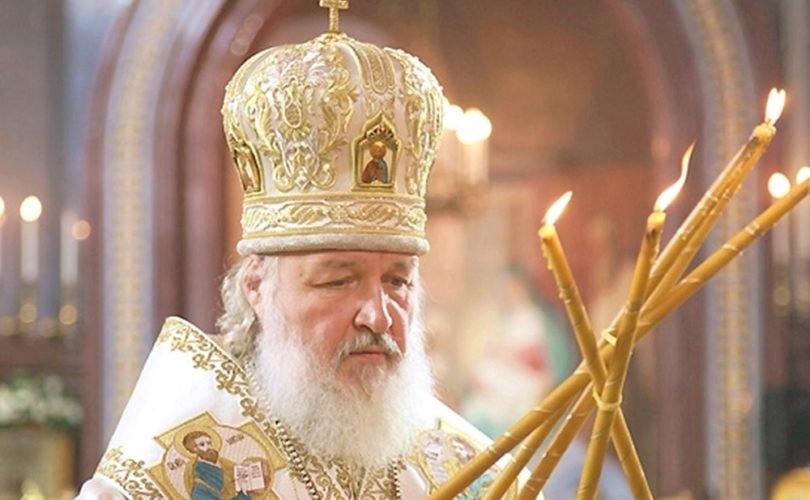 MOSCOW, Russia, November 23, 2016 (LifeSiteNews) — The head of the world's largest Orthodox Church says anti-discrimination laws supporting homosexuality and transgenderism are “at odds with the moral nature of human beings.”

“What’s happening in the Western countries is that, for the first time in human history, legislation is at odds with the moral nature of human beings,” he said.

The namesake of Patriarch Kirill, St. Cyril of Alexandria (fifth century), warned that if we deem “that which is evil fit for commendation and applause, the prophet's words will apply to us, 'Woe to those who call evil 'good' and good 'evil,' who put darkness for light, and light for darkness.'” (Isaiah 5:20)

Kirill explained that our common moral nature was created by God and is the basis of good laws. “Legislation defines moral values in legal terms, telling us what’s good and what’s bad,” he said. “We know that stealing is bad and helping people is good, and laws define what stealing is and what the suitable punishment for it is.”

However, his All-Holiness explained, laws are now being made that go against our nature. “Now, for the first time in human history, the law allows something that doesn’t correspond to our moral nature,” he said.

In fact, laws for same-sex “marriage” and other laws, such as those affirming transgenderism, are actually directly opposed to our moral nature. “The law contradicts it,” Kirill said.

He compared LGBTQ legislation with apartheid laws in South Africa and anti-Semite laws in Nazi Germany, and concluded that in their innermost hearts, people know such laws are wrong. “They knew it wasn’t right; it was artificial; it was part of some ideology and not in sync with their moral nature.”

The Patriarch's opinion confirms the ancient wisdom of the founder of monasticism, St. Anthony the Great (251-356 AD), who predicted, “A time is coming when men will go mad, and when they see someone who is not mad, they will attack him, saying, 'You are mad; you are not like us.'”

Qualifying his remarks, the Orthodox hierarch insisted that hatred and personal judgment have no place in the Christian's life. “We don’t condemn people who have different sexual preferences,” he clarified. “That's on their conscience and it’s their business, but they shouldn’t be discriminated against or punished.”

But the Patriarch drew the line at societal affirmation of homosexuality. “However, under no circumstances should this be accepted as a social norm, no different from the social norm that stems from our moral nature, meaning marriage between a man and wife who create a family and have children.”

Kirill solemnly warned that Western laws legalizing same-sex “marriage” and transgenderism will destroy humanity. “This new trend poses a significant threat for the existence of the human race,” he said.

He added that it is the Church's responsibility to be the conscience of the nation, but governmental leaders are actively suppressing the Church's voice. “The Church has to address this and say it’s a bad thing, but we’ve seen that authorities in some countries have been trying to silence clergymen,” Kirill said.

The Christian leader pointed out the irony. “In the countries that declare their commitment to freedom of speech, you can get punished for expressing your opinion.”

“One Protestant pastor went to jail for calling same-sex ‘marriage’ a sin in his sermon. Again, this is very reminiscent of what was happening under Soviet totalitarianism.”

“That’s a dangerous trend, and I hope it will fade and the natural order of things will prevail,” he said, adding that he fears for humanity's future. “I don’t even want to think about what might happen to us otherwise.”