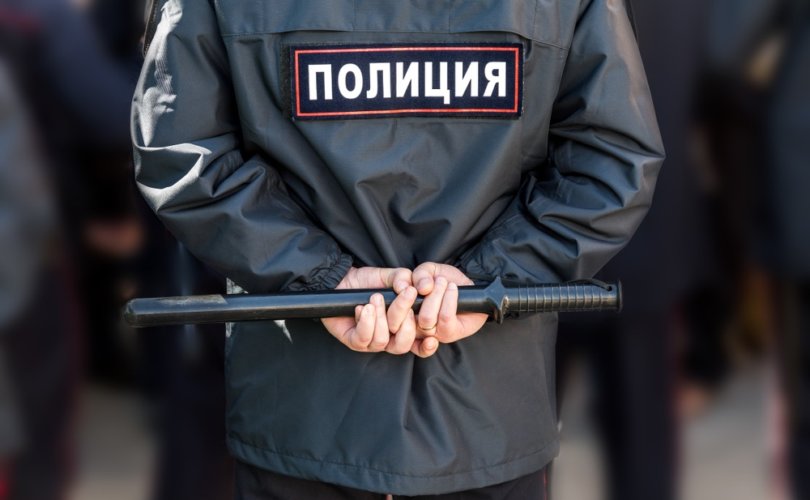 KOSTROMA, Russia (LifeSiteNews) — A Russian Orthodox priest has been arrested for allegedly “discrediting the Russian armed forces” by delivering a sermon opposing his country’s full-scale invasion of Ukraine which began late last month.

Fr. Ioann Burdin of the Resurrection Church in Russia’s western Kostroma region was arrested shortly after he slammed Russian troops in a sermon last weekend for “shelling the Ukrainian cities of Kyiv, Odessa, Kharkiv, and killing citizens of Ukraine — brothers and sisters in Christ.”

“Father Ioann Burdin of the Resurrection Church in Russia’s western Kostroma region will be tried for anti-war statements in his sermon, and for publishing a link to an anti-war petition on his parish’s website, the BBC’s Russian service reported.”https://t.co/5MjE825hzJ

Prior to Burdin’s sermon, his parish had reportedly shared a link to an anti-war petition and a statement opposing the military conflict.

According to Newsweek, the statement had asserted: “We, Christians, cannot stand idly by when a brother kills brother, a Christian kills a Christian. We cannot bashfully close our eyes and call black white, evil good, say that Abel was probably wrong when he provoked his older brother.”

The statement also compared the Russian invasion of Ukraine under President Vladimir Putin with the German invasion of Poland under Hitler which sparked World War II, arguing, “Let’s not repeat the crimes of those who hailed Hitler’s deeds on Sept. 1, 1939.”

A Russian priest who gave an anti-war sermon on Sunday has been arrested and is due to face court.

Father Ioann Burdin was detained shortly after he made a sermon to a small congregation in the village of Karabanovo.

He preached against the war. https://t.co/kfS87ukJUG

Fr. Burdin, who faces a court hearing later this week, has been accused of committing a “public offence aimed at discrediting the Russian armed forces which are conducting a special military operation” in Ukraine, according to a police report quoted by the Media Zona news site.

The priest’s sermon allegedly violated part 1 of the new article 20.3.3 of Russia’s Code of Administrative Offenses, which reportedly bans individuals from speaking out against Russia’s military action, or even using the words “invasion” and “war” in connection with the Russian attack on Ukraine.

Putin has continued to characterize the all-out war against Ukraine, which has led to a massive refugee crisis and over 1,000 civilian casualties, as a “special military operation.”

Last week, Putin enacted a sweeping new censorship law to punish individuals with up to 15 years in prison for dissenting from the Kremlin’s narrative regarding the war, a move which Daily Wire founder and conservative commentator Ben Shapiro called an example of “straight-up authoritarianism.”

Various U.S.-based news organizations have responded to the measure by pulling their reporters and temporarily stalling their coverage in Russia, fearing punishment from Russian authorities for reporting news that conflicts with the perspective of Putin’s government.

The news comes as the invasion of Ukraine has sparked widespread protests within Russia. Many citizens have come out in opposition to Putin’s decision to engage in military conflict against the sovereign nation.

On February 24, after Russian troops began an aggressive assault on Ukraine in the early hours of the morning, thousands of Russian citizens took to the streets to protest the attack.

Video footage showed the main street of the historic city of St. Petersburg filled with protestors chanting “No War!” and “Ukraine is not our enemy!”

The demonstrations came in defiance of Putin’s threats that anyone who engaged in protests against the conflict would be arrested. To date over 13,000 Russian citizens have been arrested by police for publicly protesting the invasion.

On Tuesday, U.S. President Joe Biden responded to bipartisan pressure by finally ending the import of Russian oil to the U.S. Intended to be a major blow to the energy-dominant Russian economy, the move is also expected to send already record-breaking gas prices sky-high for American consumers.

While both Republicans and Democrats have lobbied Biden to stop purchasing oil from Russia in the wake of the invasion of Ukraine, the Biden administration has drawn massive backlash for looking to other authoritarian regimes like Nicolas Maduro’s Venezuela for new oil deals rather than pursuing American energy independence.

Meanwhile, the American response to Russia’s invasion of Ukraine has triggered significant debate on both sides of the political aisle and opened rifts among conservatives regarding how the U.S. should react to the attack, which many fear could boil over into a much larger conflict.

Some have argued that it’s not in the interest of the American people to become involved in a foreign war, particularly as major culture wars rage in the U.S. regarding critical race theory, radical gender ideology, and rampant abortion. Others have pointed out that Russia’s nearly unchecked invasion of a sovereign nation is a matter that directly concerns the U.S. and Europe, since the assertion of Russian power threatens to upend western hegemony, replacing American and European influence globally with Russian-style authoritarianism.

Many analysts have also suggested that a tepid western response to Russia’s attack on Ukraine will embolden China to expand its power by seizing Taiwan. The Chinese Communist Party (CCP) has long asserted that Taiwan is “an inalienable part of China.”