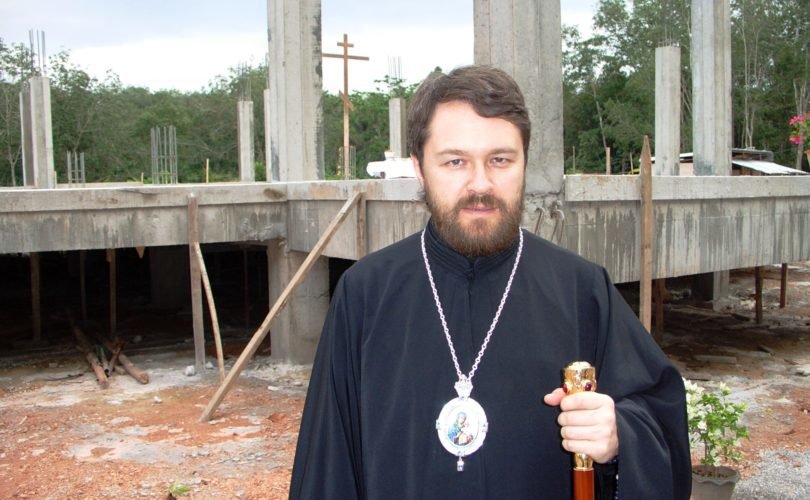 The Roman Catholic and Russian Orthodox Churches should join forces to defend marriage and the family on the international stage, the head of the Synodal Department for External Church Relations for the Moscow Patriarchate told Catholic bishops at the Vatican on Thursday.

“The time has come for Christians to join efforts and come out as a united front for the noble goal of protecting the family when confronted by the challenges of the secular world for the sake of preserving the future of civilization,” Metropolitan Hilarion (Alfeyev) said, addressing the Extraordinary Synod of the Family in Rome.

Emphasizing the serious state of the family today, the hierarch said in his statement that saving the family “is the field in which our alliance may become really needed.”

“The topic of the family is one of the most acute and vital today,” Metropolitan Hilarion stated. “It is an indicator of the moral state of the society in which we live.”

The Catholic and Russian Orthodox Churches should collaborate to defend their positions in discussion with legislative and executive powers in specific countries, and in front of international organizations such as the UN and the Council of Europe, he said.

“We have anxiously watched as abuse of the notions of freedom and tolerance has been used in recent years to dismantle the basic values rooted in religious traditions,” Metropolitan Hilarion said. “There is an increasingly aggressive propagation of the idea of moral relativism applied also to the institution of the family held sacred by all of humanity.”

He brought attention to the resulting erosion of respect for life with the family’s collapse.

“Children are no longer seen as the desirable fruit of spouses’ mutual love,” Metropolitan Hilarion said. “The right of abortion, restricted by almost nothing, has become widespread, and has led to the legalization of the destruction of millions of lives.”

He also decried the abandonment of children.

As the synod neared the end of its second week and dispute lingered over its documents and direction, the Russian hierarch warned against moral relativism, stating it had also affected many Christians who profess the Church’s teaching on the family but refuse to follow it.

The hierarch drew a parallel between the breakdown of the family and legalized homosexual “marriage” imposed in the U.S. and parts of Europe, homosexual adoption, and surrogate motherhood.

“Traditional families built on the notion of marriage as union of man and woman become weaker and weaker,” Metropolitan Hilarion said. “Instead of concern for their consolidation, there is the propaganda of so-called 'free relations.' The notions of fidelity, mutual respect and responsibility of spouses are replaced by the imposition of hedonism and calls to live for one’s own self.”

The Russian hierarch reminded the Synod’s bishops of the 2013 Rome conference Orthodox and Catholics Protecting the Family Together, and its final statement underscoring, “our conviction that we bear a common responsibility for making marriage and family life the way to sanctity for Christian families,” and he issued a call to action.

“It is essential not to confine ourselves to noble appeals, but to press in every possible way for the legal protection of the family,” Metropolitan Hilarion said. “It is necessary to restore in our society the awareness that freedom is unthinkable without responsibility for one’s actions.”