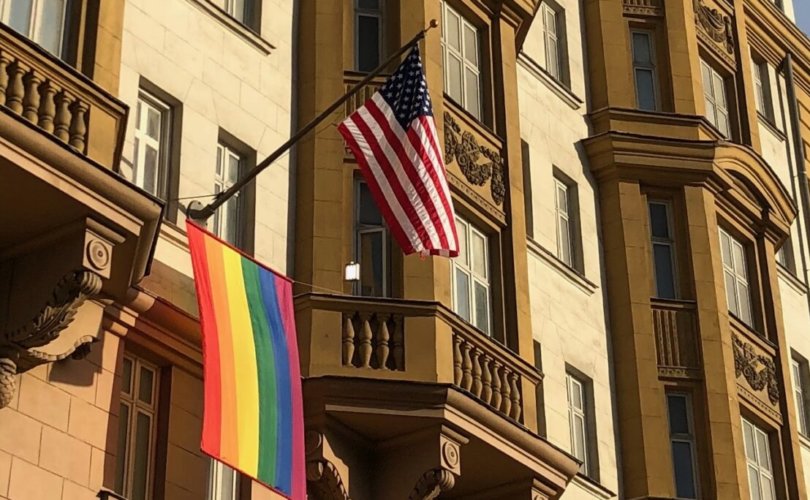 A rainbow flag flies below the U.S. flag at the American embassy in Russia.U.S. Embassy

When Putin was told during a televised video conference that the U.S. embassy had a pride flag hanging from the front of its building to celebrate Pride month in June, he asked, “Who works in this building?” When the president was told “Americans,” he responded, “Let them celebrate.”

“They’ve shown a certain something about the people who work there,” he added with a smile, according to The Moscow Times, seeming to suggest that flying the rainbow flag could be a reflection of the embassy workers’ homosexuality or transgenderism.

During a video conference on Friday, Putin also said “we passed a law banning the propaganda of homosexuality among minors. So what? Let people grow up, become adults and then decide their own destinies.”

In a statement, the U.S. embassy explained the “LGBTI flag was created by American artist and activist Gilbert Baker and was first raised as a symbol of hope and diversity on June 25, 1978, during the Gay Freedom Day parade in San Francisco.”

The embassy then mentioned that “June is Pride Month and we celebrate that everyone deserves to live a life free from hatred, prejudice, and persecution.”

Ambassador John J. Sullivan, who went to a Catholic high school, commented, “LGBTI rights are human rights. And human rights are universal. It’s as simple as that.” He did not explain why homosexuals and people claiming to be a member of the opposite sex need special rights they don’t already have as human beings.

“During the Obama administration, the government granted blanket permission to embassies overseas to fly the pride flag during June,” NBC News continued. “This year, U.S. diplomats said, embassies were told they can display the pride flag in other places, including inside embassies, but that requests to fly it on the flagpole must be specifically approved. No approvals have been granted.”

In Moscow in 2020, the rainbow flag was flown not on a flagpole but outside a window, prominently placed just below the American flag.

Meanwhile, a new amendment to the Russian constitution was approved by the people just a few days ago. That amendment determines that only monogamous heterosexual unions are recognized as marriages.

Other amendments put up for referendum include one that adds the phrase “faith in God” to the Russian constitution, and another that would eliminate term limits for the Russian president, effectively allowing Putin to remain in power for life.

Putin said earlier this year, “We need to clarify some things. A marriage is a union of a man and woman. A family is a different thing, but the idea is right and it should be supported. We need to only think about how to formulate it and where.”

“As for ‘parent #1’ and ‘parent #2,’ I have already publicly said it and I will repeat it once more: as long as I am president, we will not have parents #1 and #2, we will have ‘papa’ and ‘mama,’” the Russian president added.

In 2013, as prime minister, Putin signed a bill outlawing the promotion of homosexuality, homosexual “marriage,” and so-called “gay pride” parades throughout the country.

Even though Russia has been strong on stopping propaganda for homosexuality and gender ideology, the country is still plagued by high numbers of abortions. In 2018, roughly 661,000 children were killed before birth, compared with over 1.6 million live births.

Since the early 2000s, there have been less than 2 million abortions every year. The number dropped to under 1 million for the first time in 2014.

In the United States, according to the pro-abortion Guttmacher Institute, roughly “862,320 abortions were performed in 2017.” Even though that number is higher than in Russia, relative to the population size, abortion is far more common in Russia than in the United States.